KEARNEY – Imagine snorkeling in the crystal-clear water above the Great Barrier Reef, snuggling with koalas and kangaroos at the Australia Zoo and taking in the spectacular views during a sunset cruise in the Mooloolah River.

This dream vacation became a reality for six University of Nebraska at Kearney students who spent part of their summer in “the land down under.”

The group learned about Australian history and culture at the University of the Sunshine Coast near Brisbane and made plenty of memories during the three-week study abroad program, which was offered for the first time this year.

For UNK junior Leslie Braun, it was an opportunity she’s been waiting for since high school. Both of Braun’s sisters studied abroad in Europe, but she always had her sights set on Australia.

“Everybody joked that I was going as far away from home as possible, and that’s pretty much what it was,” the Henderson native said. “This was my first time traveling internationally, so the 13-hour plane ride was kind of a shock.”

“Traveling that huge distance was kind of amazing in itself because everywhere I’ve been was in the U.S. and is drivable,” said Asche, who had never seen an ocean before.

What awaited them in Australia was even more awe-inspiring.

“I experienced a bunch of firsts that I would have never done had I not gone to Australia,” Asche said. “It’s a great opportunity that not everyone gets to take advantage of, so the fact that UNK offers it is just amazing.”

The group arrived July 5 in a country that’s both foreign and familiar for U.S. travelers.

Most of the people there speak English, so it’s easy to communicate, and you’ll find many recognizable businesses – McDonald’s, Pizza Hut, Target and H&M to name a few.

“It’s a lot like the U.S. It’s kind of a melting pot and a lot of the things we have here they have there,” said Braun, a business administration major with a minor in construction management.

“It’s also totally different because we live in the middle of the U.S. where we’re hundreds of miles from an ocean and there we could take day trips to the beach,” she added.

There are some cultural differences, as well.

Of note to Asche, an early childhood education major from Hebron: students brought their own lunches to school and many people don’t wear shoes.

“They’re definitely more laid-back than we are,” she said.

Australians are also more environmentally conscious than most Americans, according to Asche, who believes the U.S. can learn a lesson in sustainability.

“It was kind of eye-opening seeing everything they do. They don’t have plastic bags when you go to the grocery store. You’re just expected to bring your own bag or buy a reusable one there. That’s such an easy thing we could do here,” said Asche, noting that the toilets also feature half- and full-flush options to conserve water.

Most of Australia’s states and its largest retailers have banned single-use plastic bags, cutting usage by roughly 80 percent, according to the country’s National Retail Association.

Suzanne Maughan Spencer, an associate professor and chair of UNK’s Department of Sociology, grew up in Newcastle, Australia, about 100 miles north of Sydney. She was happy to lead the study abroad trip and give students an up-close look at her home country.

“You get to see a culture that’s somewhat similar, yet in some ways quite different from the United States,” she said. “It exposes you to a new way of life.”

Of course, the wildlife and landscape are quite different from central Nebraska.

Instead of campus squirrels, they have kangaroos. And there are plenty of dangerous snakes, spiders and ocean creatures the students were warned about.

However, that didn’t stop them from exploring during a four-day visit to Fraser Island and Lady Elliot Island.

“We got to see the Great Barrier Reef when we were at Lady Elliot and we got to see some really cool freshwater lakes and streams at Fraser,” Braun said.

The entire group went snorkeling at the Great Barrier Reef – an experience that’s “hard to beat,” according to Asche – and Braun and Marlana Kent of Cambridge went scuba diving.

“That was the most fun thing I would say we did while we were there,” Braun said. “It was like real-life ‘Finding Nemo’ is how somebody described it, and I couldn’t say it better myself. Any color of fish you can imagine, we saw it down there.” 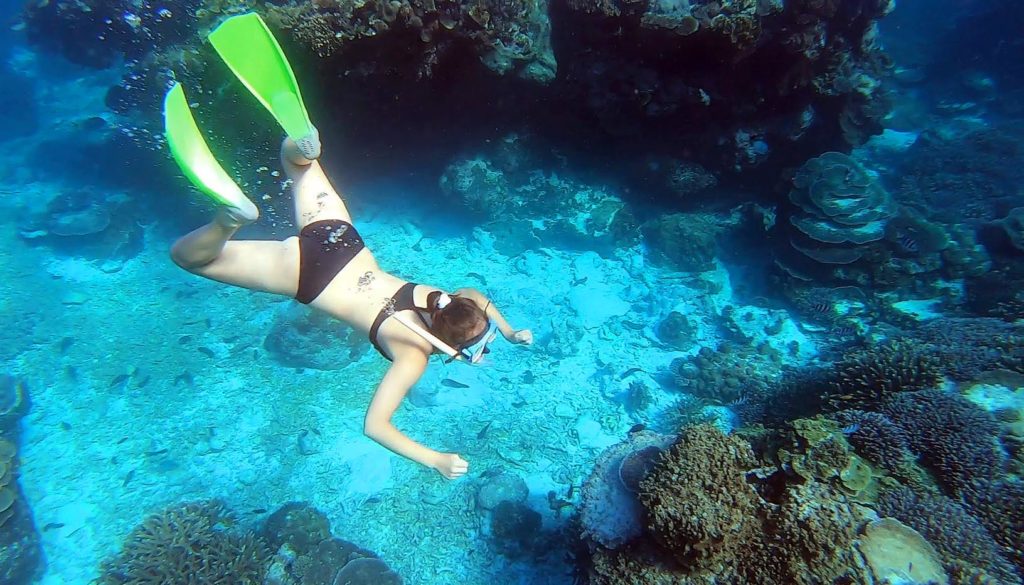 The UNK students also visited the Australia Zoo – known as the “Home of the Crocodile Hunter” in honor of the late Steve Irwin and his family – as well as Noosa, the Eumundi Markets and a ginger factory.

“This trip gave the students an opportunity to see things you can usually only see in picture books or on TV,” Maughan Spencer said. “It’s a whole different experience to touch and feel than it is to just watch something on TV. It opens new worlds for you.”

During their coursework, which transfers for three credit hours at UNK, the students learned about Australia’s history and indigenous people, tourism and economy, political system, environment and conservation efforts.

“They were so much fun. They were just amazing,” she said. “I couldn’t have asked for a better group, that’s for sure.”

The students were equally thrilled about the opportunity.

“If it hadn’t been for study abroad, there’s no way I would have taken three weeks out of my summer to go live in Australia,” said Braun, who celebrated her 21st birthday during the trip.

LOPERS LEARN AROUND THE WORLD

The University of Nebraska at Kearney offers more than 50 options for students interested in studying abroad, with programs ranging from a few weeks to a full year.

Lopers can participate in an international experience in dozens of countries through individual or group trips, including faculty-led programs in the Czech Republic, Ireland, Australia and Italy.

“Everybody should have an international experience, because it’s such a growing opportunity,” said Ann Marie Park, assistant director of international partnerships and study abroad at UNK. “Students who study abroad change substantially for the better.”

In Park’s opinion, “there’s really not a great reason not to study abroad.”

With proper planning, course credits transfer directly to UNK, ensuring students remain on their preferred path to graduation, and the cost is usually comparable to studying and living on the UNK campus, plus travel expenses. UNK also awards scholarship money that can be applied to study abroad programs.

Approximately 200 UNK students choose to study abroad each year, and they’re gaining more than lasting memories and lifelong friendships. It’s a cultural experience that allows students to broaden their worldview while preparing for the workforce by boosting their self-confidence and enhancing their communication, networking and problem-solving skills.

“You can go abroad and have this really fun experience, plus you’re making yourself more employable,” Park said. “Studying abroad is an education bullet point you can put on a resume underneath your degree from UNK.”

For more information on UNK’s study abroad programs, contact Park at 308-865-8944 or parkam@unk.edu, or visit unk.edu/studyabroad.