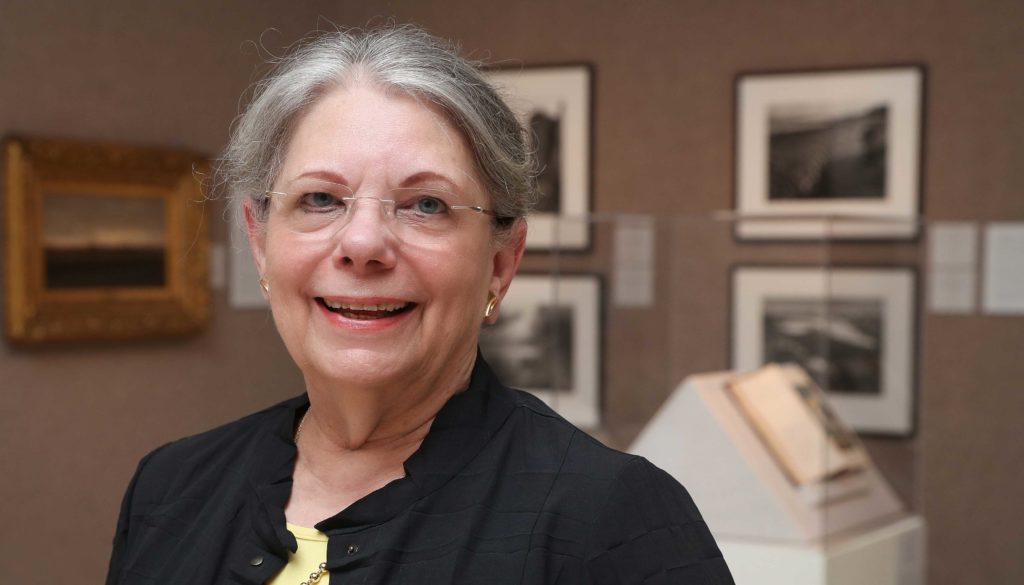 “It has been an absolute privilege to serve as MONA’s director for over 17 years.”
– Audrey Kauders

KEARNEY – After 17 years directing the Museum of Nebraska Art, Audrey Kauders has announced her retirement to the staff and board.

“Audrey’s legacy and achievement deserve celebration,” said MONA board chairman Bob Culver. “She has taken a ‘collection’ to a ‘museum’ that is widely recognized as first-class. Further, she’s embraced Kearney as her home and made significant contributions to her community.”

Culver said Kauders’ retirement is effective June 30. He and University of Nebraska at Kearney Chancellor Doug Kristensen will begin plans for a national search for the next director and consider options for interim leadership while the job search is underway.

“Audrey was the right person at the right time to advance the vision of the originators of MONA,” Kristensen said. “The prestige and prominence of MONA have soared during the last 17 years, along with the dedication and enthusiasm of volunteers, patrons and benefactors. This community and state have been well-served under her leadership, as are future generations of Nebraska art lovers.”

Opened in October 1986, MONA houses the official art collection of the state of Nebraska, which includes more than 5,000 pieces. The museum is governed by a statewide board of directors in collaboration with UNK.

Kauders joined MONA in 2002 after 21 years at Joslyn Art Museum as deputy director and a stint as Joslyn’s interim director. Before moving to Omaha, she started her museum career at the Montgomery Museum of Fine Arts in Montgomery, Alabama. She earned her bachelor’s degree in speech and drama from Huntingdon College in Montgomery, and her Executive Master of Business Administration from the University of Nebraska at Omaha. She was also selected for the four-week resident Museum Management Institute at the University of California, Berkeley – now the Getty Leadership Institute.

During her time as MONA director, nearly 1,500 works of art were added to the collection and more than 650 exhibitions were displayed at the museum in downtown Kearney and other venues across the Midwest. MONA also received seven named endowment funds during her leadership, bringing the total to 16 and increasing the overall value from $600,000 to $4.18 million.

“It has been an absolute privilege to serve as MONA’s director for over 17 years,” Kauders said. “I’m very passionate about museums and how important they are to everyday life for many people. I’m particularly proud that MONA has always had free admission, so money is not a barrier to experiencing art in a museum setting.”

MONA also hosts cultural events, hands-on workshops and an annual spring student art show, which Kauders expanded to include area schools outside Kearney. Additionally, she strengthened the relationship between MONA and the G.W. Frank Museum of History and Culture, located on the UNK campus, and helped establish Kearney Cultural Partners, a consortium of organizations that work together to promote Kearney as a cultural destination.

A past president of the Nebraska Museums Association, Kauders’ work has been recognized through awards from the Nebraska Arts Council, University of Nebraska Board of Regents, UNO College of Business Administration and YWCA.

“I have been so fortunate to work with dedicated and creative staff, a plethora of committed and involved board members and supportive and encouraging faculty and staff at UNK,” Kauders said. “Those of us in the nonprofit sector are wholly dependent on support from our communities, and I am deeply grateful for the place MONA holds in the hearts of so many in central Nebraska, across the state and beyond.”