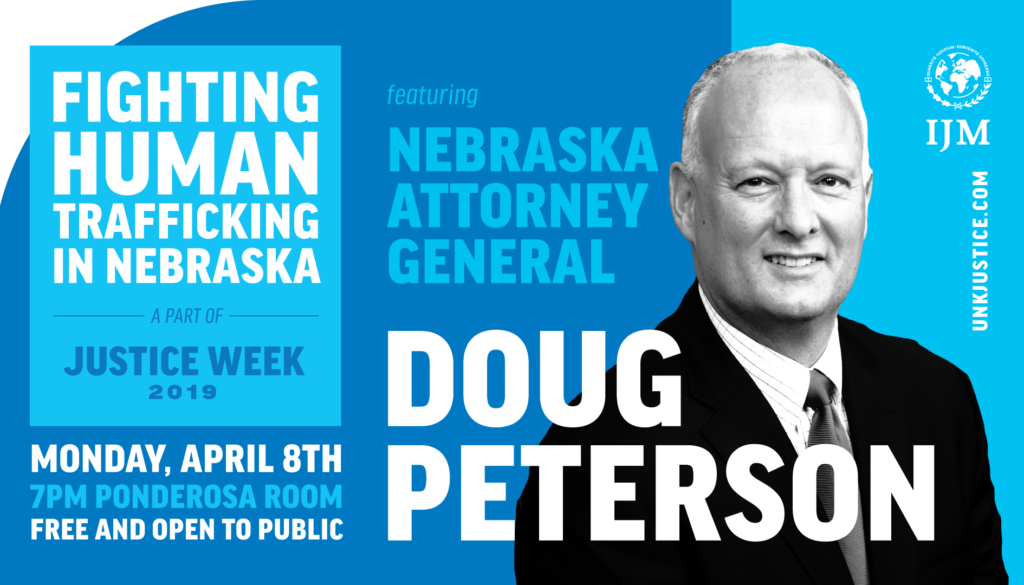 It’s also a concern here in central Nebraska, where there’s a student organization shining light on the problem.

The International Justice Mission chapter at the University of Nebraska at Kearney is hosting its seventh annual Justice Week April 8-12 with several events on campus, including a keynote address from Nebraska Attorney General Doug Peterson.

“It’s easy to go about our daily lives and forget that the freedoms we have aren’t accessible to everyone around the world,” said Jase Hueser, a senior from Papillion and president of the UNK chapter.

During Justice Week, the group reaches out to the UNK and Kearney communities to raise awareness of sex trafficking, forced labor and global violence and the work being done to stop the modern slave trade.

“If we can inform just one person that slavery still exists, we’ve met our goal,” Hueser said.

According to the Human Trafficking Initiative, supported by The Sherwood Foundation and Women’s Fund of Omaha, about 900 people are purchased for sex each month in Nebraska, most of them females forced into prostitution.

Peterson will discuss the state’s efforts to combat human trafficking 7 p.m. April 8 during an address in the Nebraskan Student Union Ponderosa Room. The event is free and open to the public.

In his second term as attorney general, Peterson has prioritized human trafficking and supported legislation that created tougher penalties for traffickers while better protecting victims. His office also oversees the Nebraska Human Trafficking Task Force created three years ago to address this issue. The task force, which includes five regional teams, trains law enforcement and other personnel on ways to identify and stop human trafficking and coordinates with service providers, advocates and community partners to ensure survivors have a safe place to go.

International Justice Mission, a global organization working to end the modern slave trade, estimates there are more than 40 million slaves worldwide, with human trafficking generating $150 billion annually. The nonprofit has rescued more than 45,000 people from slavery and violence while helping authorities arrest slave owners and other criminals.

Other Justice Week activities include documentaries highlighting International Justice Mission’s work and a “Celebrate Justice” event at the Christian Student Fellowship House. UNK students will also participate in a 24-hour stand by the Bell Tower.

“The symbolism behind that is we’re sacrificing one day for another individual’s every day,” Hueser said of the stand, which doubles as a fundraiser for the organization.