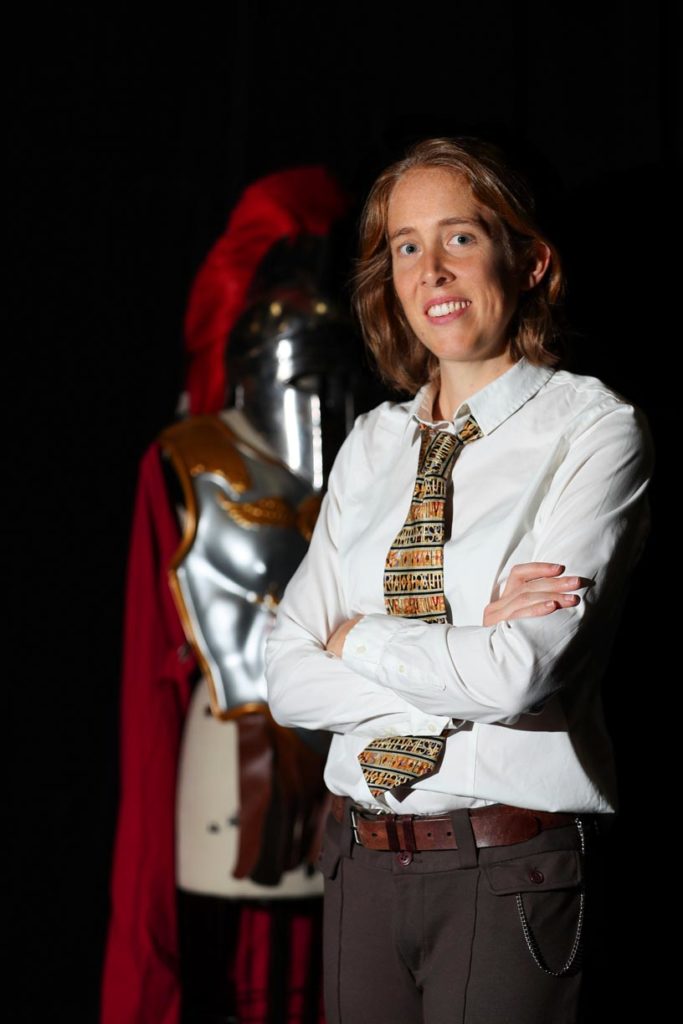 Megan Hartman’s journey toward a career in linguistics started at her father’s bookshelf. There, she saw a book cover with dark storm clouds splitting through a golden sky, and a luminous girl holding a black horse with a spiral horn.

Mike Hartman read the book to his daughter. Then he kept going, well into Hartman’s high school years. Together they explored the fantasy worlds and epic quests of literature, which draw heavily on ancient mythologies and medieval cultures.

“That started my long track down the craziness,” Hartman said. “I loved the fantasy books, loved reading with Dad. Anything old was awesome.”

Hartman followed her love of “anything old” into the study of literature and languages, but the journey didn’t stop there. She’s taken metrical analysis of medieval Germanic poetry in unexpected directions, to explore poets’ ideas, rather than just their words. Hartman said as a philologist, she connects everything she loves about language.

An associate professor at the University of Nebraska at Kearney since 2011, Hartman has published critical work steadily since receiving her doctorate from Indiana University and has emerged as a key voice in scholarship on hypermetric verse.

Her first book, “Poetic Style and Innovation in Old English, Old Norse, and Old Saxon,” will present her criticism to a wider audience. She said she hopes the work will find an audience with both literary critics and metrists.

“One thing that I find very frustrating about analysis of Old English poetry is that you really have two camps. You have literary people who want to talk about the literature. They’re doing close readings and looking at the word choice and using new literary theories, and all of that stuff you’d sort of expect from literary people,” she said, analyzing the texts the way they’d analyze literature from any time period.

“Then you have linguists who are looking more at the language itself. So when it comes to meter, what most of those people are doing is trying to figure out the meter.”

Hartman has blended her many interests and talents into a critical approach that does both.

First came the fantasy literature, and the love of books Hartman inherited from both parents. That love drove her scholarship decisions from the beginning. She took all the history and language classes she could in high school, viewing it as research for her own writing career.

“I took all the old classes, the Greek mythology and the early English literature and all of those. Fantasy author was my career of choice for a long time, after I decided dragon fighter was probably not an option,” she said. “I wanted to know all the old legends and the way they told the stories, so I would have more ideas and more things to write about.”

Hartman wrote a fantasy novel as her senior project, and she still enjoys creative writing. Her career plans changed, though, in college. She’d done some teaching in the martial arts studio where she took classes and thought an education degree would be a good backup plan in case the fantasy author thing didn’t work out. She chose the University of New Hampshire for its program, which would give her degrees in writing and English education in five years.

“Except I never really wanted to take the education courses,” Hartman said, just the English classes. And her adviser suggested fantasy “genre fiction” might not fit well into college writing courses.

“That’s when I thought, well, (J.R.R.) Tolkien didn’t have formal training in writing, he was a scholar and he just read all the books. So maybe I can read all the books, and I will take all of the old medieval courses I possibly can,” Hartman said.

Some of those were courses in Old English. She learned the language, learned how to translate the literature into modern English, then how to scan the poetry. A scansion involves marking the stressed and unstressed syllables in each line to determine the meter. While the other students didn’t have much fun with the process, Hartman was hooked.

“They were like little puzzles, and I loved all the little puzzles and trying to figure it out and putting it together. And everybody thought I was crazy,” Hartman laughed.

The same “mathy kind of brain” that helped Hartman learn French, Japanese and Latin also helped her scan poetry. Equally important, though, were the years of piano lessons she’d taken from her mother.

“That’s the thing that I think really let me bring everything I love together. It’s that mathematically, analytically charged version of it so that I can do the markings and linguistic and statistical analyses. But then there’s a certain degree that you have to feel it, and hear it, to really make the stylistic part of the metrical analysis work,” she said. 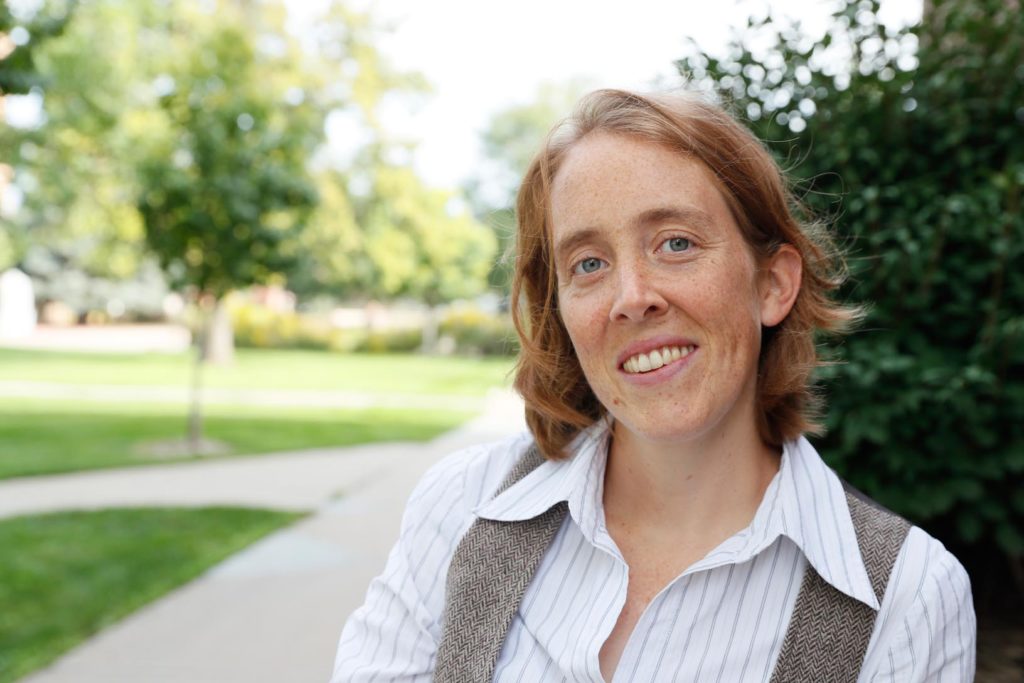 Hartman was recruited to Indiana for graduate school by R.D. Fulk, a top linguist. The same day she received a rejection letter from her first-choice school, Cornell, Hartman got a call from Indiana University offering her a fellowship.

“That’s when I found out Rob had supported my application,” she said. “Not only is he an amazing super scholar and one of the nicest men you will ever meet in your entire life, he is one of the best metrists in the entire world.”

And Indiana University’s German department had another top metrist, with whom Hartman would study Old Norse.

“I didn’t even know you could do (scholarship in) meter, and I applied at this school and got in where the two people you would want to work with were working,” Hartman said.

Metrical analysis starts with a scansion. Zeroing in on specific verses or lines of a poem, Hartman marks stressed and unstressed syllables, counting as she goes. Then she categorizes the lines based on the metrical pattern.

Hartman uses spreadsheets to document the types of lines used, how long each series of unstressed syllables is, what type of words are used, whether those words are in lifts or drops, and “all the other things that might be interesting that interact with the scansion somehow.”

Metrical analyses are typically used to figure out the rules of meter poets were using. They also help scholars determine what dialect texts are written in, and to create adaptations. Hartman, though, decided to use her skills differently.

Rather than just mapping the typical poetic features, Hartman’s spreadsheets compare a host of data: how poetic diction is used, what syllabic positions poetic diction takes, where syntactic breaks occur, or the placement of finite verbs. She uses the additional data to look beyond how poets have constructed their work, finding evidence of the ideas the poems convey.

“What are those moments that are maybe more significant because of the way (the poet is) using those more unusual verse types and using them at kind of key moments? That’s why I make these crazy spreadsheets,” she said. She focuses specifically on hypermetric verse, with lines that extend beyond the standard meter pattern.

In Hartman’s 2011 article on the Old English poem “Judith,” for example, she shows that the poet elevated the tone of hypermetric sections through such stylistic choices as verb placement and the number of stressed syllables. This tone shift, she argues, is used to emphasize verses that carry the poem’s themes – moral contrast, reversal of fortune and God’s governing role.

With the approach she takes and the texts she works with, Hartman has found her own niche in the scholarship on medieval Germanic literature.

“There are people who get at it in different sorts of ways. Maybe not the full-on metrical analysis with literary underpinnings, but I can’t say I’m completely unique in doing that. But the focus on hypermetric meter, that’s another thing people don’t do a lot. There are certainly articles about hypermetric meter, but as sort of the core of my study, no one else has really done that. I have been referred to as the expert on hypermetric meter by people I respect, so that has been fun for me,” she said. 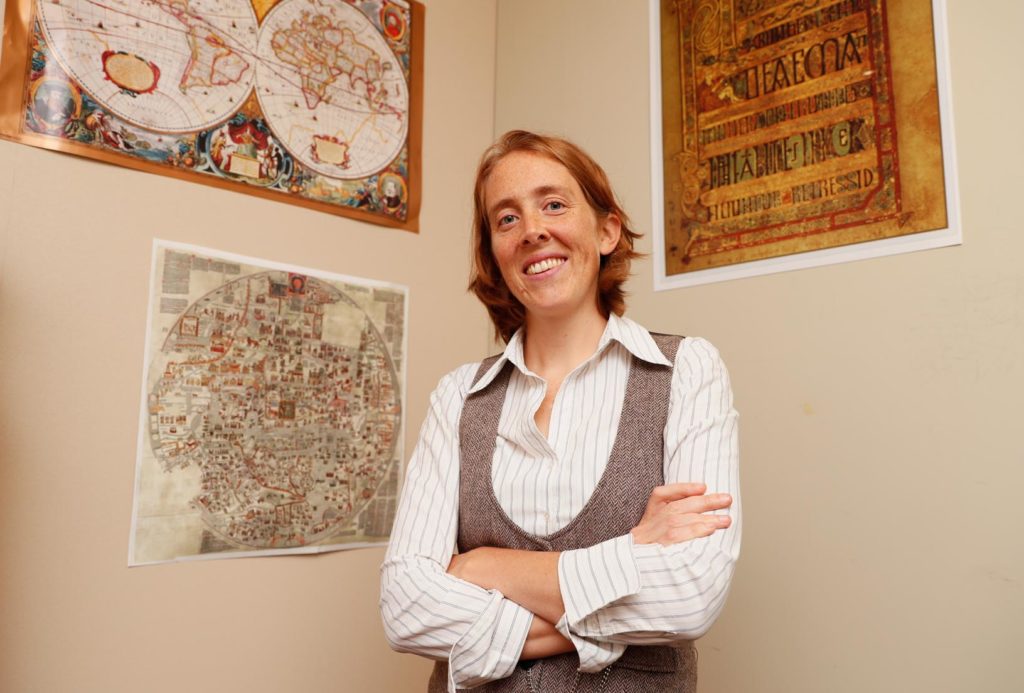 Hartman’s published articles laid the groundwork for her book, establishing her voice as a scholar and introducing her critical approach. When her book is published as part of the Richard Rawlinson Center Series for Anglo Saxon Studies by Medieval Institute Publications, she hopes to pull an audience from both linguistic and literary scholars.

“I think that’s going to be a really neat placement for it,” Hartman said. “I’m hoping it’s going to catch the eye of some more literary scholars just because it’s part of a series they would otherwise be interested in.”

Often, she said, her students are Marvel comics lovers eager to read the original stories of Thor, Odin and Loki on which current movie characters are based.

“When those movies became popular, then Old Norse mythology is all of a sudden big, and now I have this Norse mythology course that fills every time I offer it,” she said, adding that student insights have enriched her own scholarship.

One example, Hartman said, was her classroom experience with the poem “Lokasenna.” Basically an insult contest between Loki and the other gods, she used it in class because Loki is such a popular figure.

“Everyone comes to class loving Loki,” she said.

In a part of the poem that pits Thor against Loki, the students noticed Thor’s speeches used a repeated line, or helmingr, that loosely translates into a threat of violence.

“He has this helmingr that’s pretty much ‘I’m going to kick your butt,’ and now he’ll say something else. Then Loki does some fancy insult, then Thor repeats verbatim ‘I’m going to kick your butt,’ then says something else,” Hartman said. “I was reading it as this is pretty typical Old Norse poetry, you just have the repetition of this helmingr. Then when I was trying to get the students to analyze it a little bit more, one of them said, ‘Well, it’s sort of showing the difference between Loki and Thor. It’s characterizing Thor a little bit more because Thor’s the big brute, and he can’t say anything interesting.’”

At first, Hartman dismissed the repetition as poetic convention. When she did her own analysis of the poem, though, her student’s idea made more sense.

“Now it’s totally in my book, because after I thought about it a little bit more, it’s like, ‘Well, yeah, (it’s) poetic convention, but why is he choosing to use that poetic convention for Thor when he didn’t use it for Loki in the beginning?’” she said. “So, I’m analyzing this particular poem as kind of a little bit of a tour de force of that syntactic creativity, saying because it’s all about conversation and characterizing the speakers, the different ways they’re using the syntax and being creative is really important. Then it struck me that whoever said that, it’s really important the way that Thor’s syntax is just repetition, and then Loki has these circumlocutory crazinesses that he does to make Thor feel bad, then Thor just says something unmemorable but repetitive and threatening. It really shows the contrast between the way those two think.”

That’s just the kind of connection Hartman wants to make throughout her work, not only for students but for scholars who don’t always give medieval writers credit for their poetic achievements.

“The literary critics are reading these texts the same way someone would read a piece of prose. They are looking at the language, the words, how the words are being used, the characterization, how it reflects the society that it’s in – all the things a good literary critic would do for a piece of prose, and they do it really well. But you don’t see as much attention to the interaction between the language and the poetics,” she said.

“That’s part of what I want to be doing with my work is creating that bridge.” 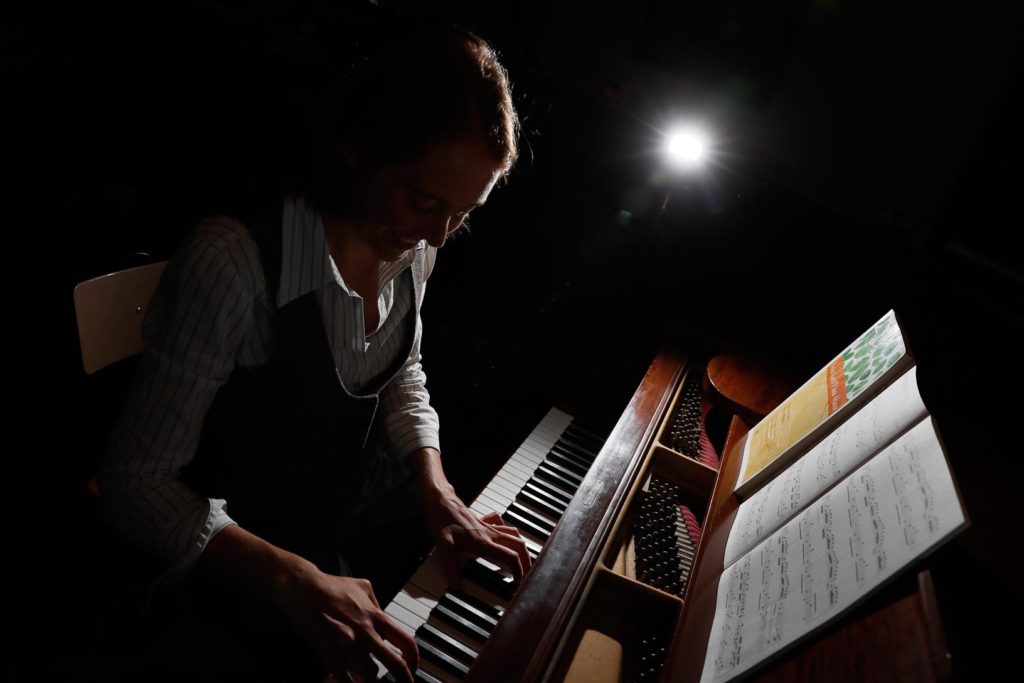 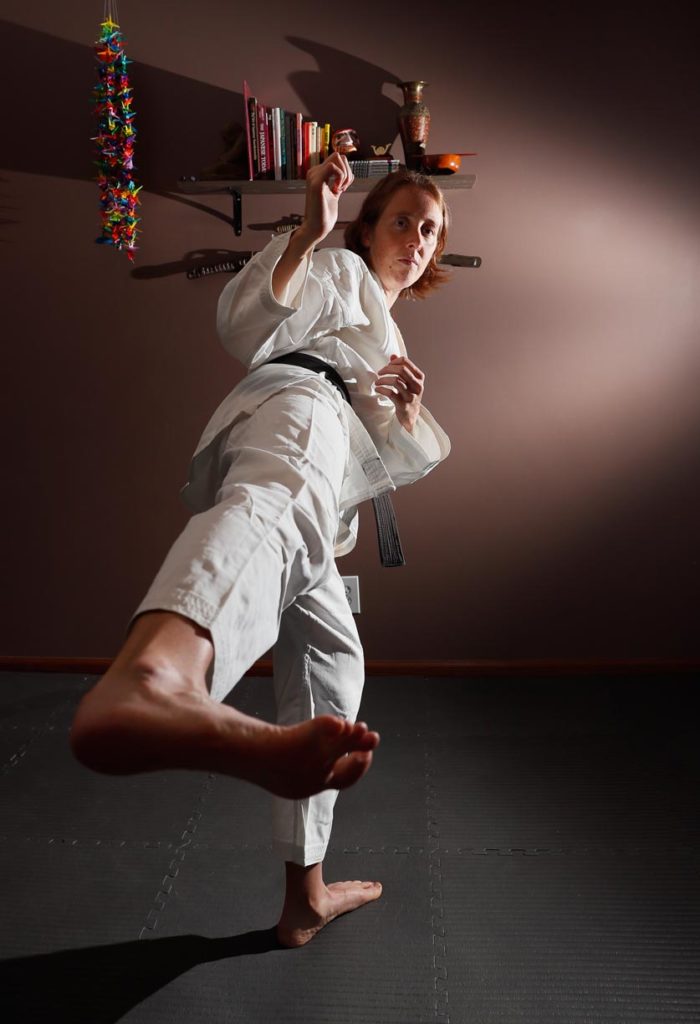 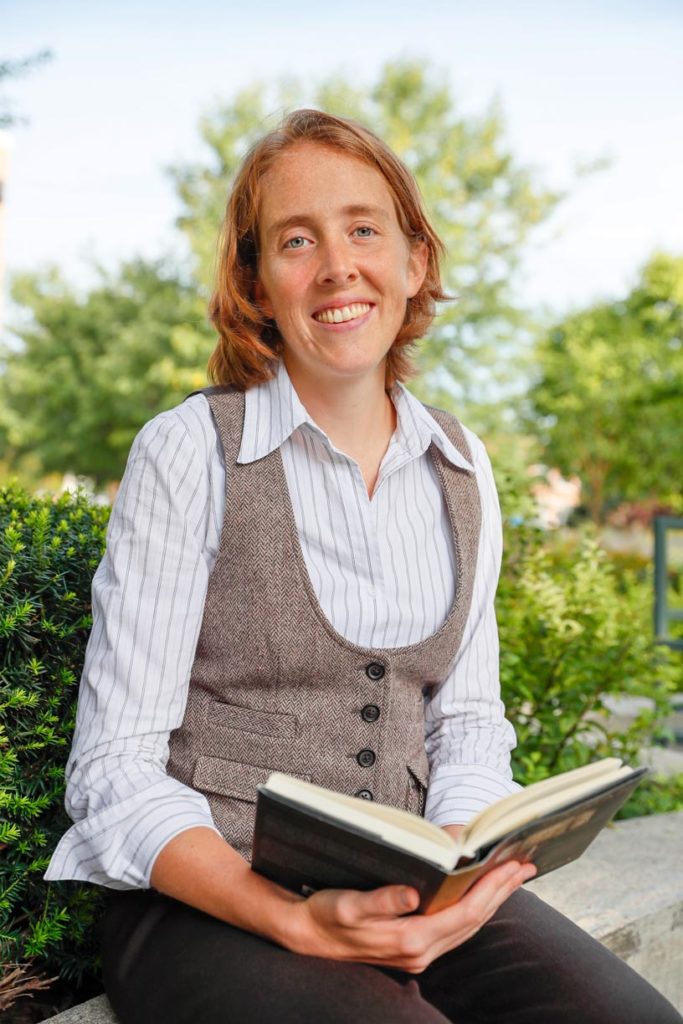