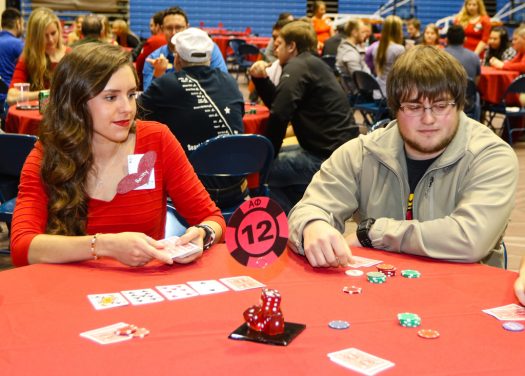 KEARNEY – Kearney’s largest poker tournament is back for its 12th year.

The Alpha Phi sorority at University of Nebraska at Kearney hosts its Red Dress Poker Tournament at 4:30 p.m. March 2 at UNK’s Health and Sports Center. Buybacks are available until 7:30 p.m.

Tickets are in advance and can be purchased from any Alph Phi member and at ticketing locations set up over the noon hour at the Nebraskan Student Union and Health and Sports Center. Tickets are also available for at the door the day of the event.

One of the UNK Greek community’s largest fundraisers each year, the Red Dress Poker Tournament regularly brings in more than ,000 annually. The event raised more than ,000 over the past four years.

Proceeds go to the Alpha Phi Foundation, which supports education and research for cardiac care and heart disease. Between 200 and 250 people typically participate in the tournament.

Alpha Phi members work as dealers and also serve snacks to those in attendance. The event also includes a variety of prizes given away through raffles.

ABOUT ALPHA PHI
Alpha Phi International Fraternity is a sisterhood of outstanding women supporting one another in lifelong achievement.  Founded at Syracuse University in 1872, Alpha Phi was one of the first Greek societies for women and was founding member of the National Panhellenic Conference. The organization is comprised of 170 collegiate chapters and more than 135 alumnae chapters throughout the United States and Canada. The Alpha Phi Foundation is the fraternity’s philanthropic and educational partner, supporting women’s heart health and other charitable and educational projects.