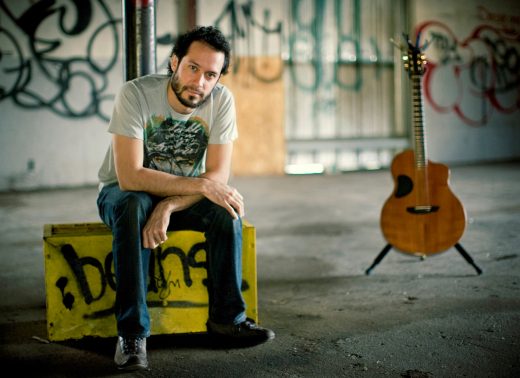 He has shared the stage with a number of national touring acts, is known for his creative performances of popular cover songs and is a YouTube sensation. The popular guitarist also brings audiences to their feet with songs he plays using guitar apps on his iPhone.

Bundy of Boulder, Colo., will perform his 10-finger picking style as the featured performer at the upcoming Kearney Symphony Orchestra concert. The event is at 7:30 p.m. Tuesday (Feb. 28) at the Fine Arts Recital Hall on the University of Nebraska at Kearney campus.

Tickets are free for students and for adults. They can be reserved through the UNK Theatre Box Office or by calling 308.865.8417 or via email at boxoffice@unk.edu

Known as the “Acoustic Ninja,” Bundy of has shared the stage with Brandi Carlile, Olivia Newton-John, Neko Case, Judy Collins, Nitty Gritty Dirt Band, David Knopfler (Dire Straits) and Stanley Jordan. His performances include many originals, as well as covers of The Beatles, U2, Metallica, Michael Jackson and Guns ‘N Roses, among others.

Bundy’s unique career has brought him across the world, with sold-out concerts in 28 countries and counting. He has independently sold over 120,000 albums on his record label, Honest Ninja Music. His video clips circulate virally at astonishing speed, with over 36 million YouTube views to date.

In addition to Bundy’s show, the Kearney Symphony will perform Chabrier’s “Espana,” a lively piece that sounds like Spanish guitars and maracas. The concert also features UNK students Alyssa Wetovich and Bobby Jacobs, who will sing selections from Mozart as part of the Concerto/Aria competition.

Kearney Symphony Orchestra is comprised of UNK faculty and students, as well as instrumentalists from communities across the region. It performs classical and pops concert repertoire, opera, musicals and large works with choir.

KSO is under the direction of Deborah Freedman, UNK Ronald J. Crocker Chair in Orchestra.