KEARNEY – The University of Nebraska at Kearney Planetarium is offering opportunities to learn about the upcoming total solar eclipse.

At 12:57 p.m. Aug. 21, the city of Kearney will plunge into darkness for 1 minute and 54 seconds. In a rare celestial alignment between the sun, moon and earth, the moon will cast a shadow over a small patch of the earth’s surface. That shadow will traverse the entire width of the United States in 90 minutes. 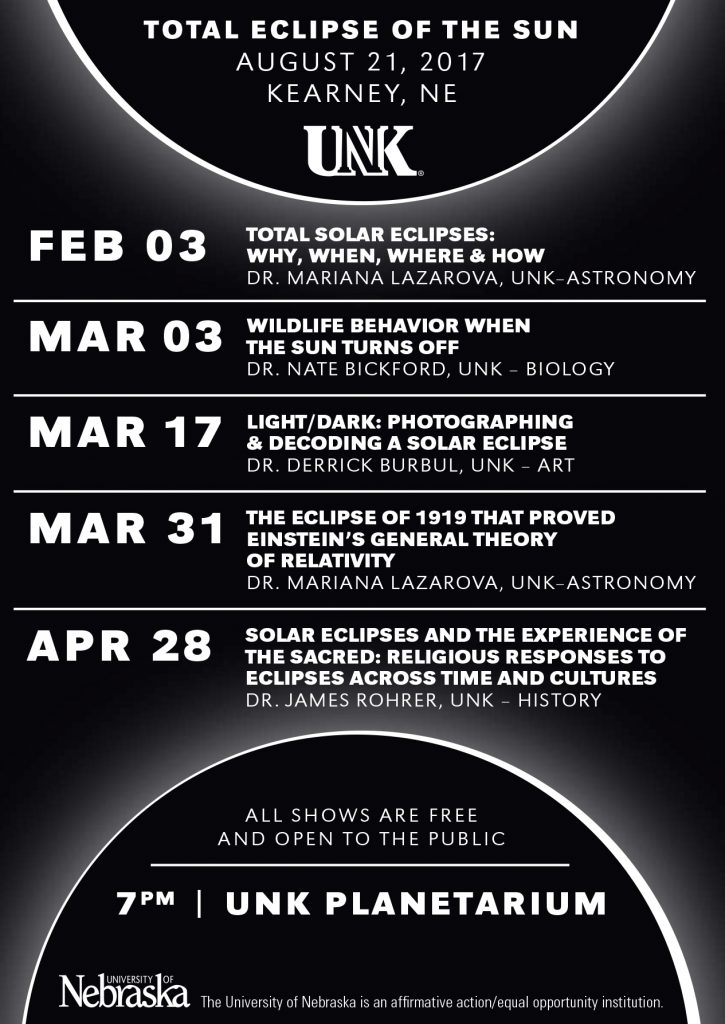 “It’s only during spectacular celestial events that we take the time to pause our busy lives and feel connected to the greater cosmos beyond earth,” said Mariana Lazarova, planetarium director and assistant professor.

UNK faculty from different disciplines will give talks about various aspects of eclipses during a series of five presentations.

On Feb. 3, Lazarova will discuss the science of eclipses, what to expect, how to prepare and what can be learned from eclipse events. She’ll also give a March 31 presentation highlighting the most famous of all total solar eclipses, the eclipse of 1919 that proved Einstein’s general theory of relativity.

On March 17, Derrick Burbul, associate professor of art and design, will introduce the public to the subtleties of photographing and decoding a solar eclipse.

James Rohrer, associate professor of history, will share the religious significances of eclipses across time and cultures on April 28.

All talks are at 7 p.m. at the UNK Planetarium. Tickets to reserve seats will be handed out on a first-come, first-served basis 15 to 30 minutes prior to each show. All shows are free, open to the public and for all ages.

UNK Planetarium show schedule for Spring 2017 can be found at www.unk.edu/academics/physics/unk-planetarium/planetarium-shows.php