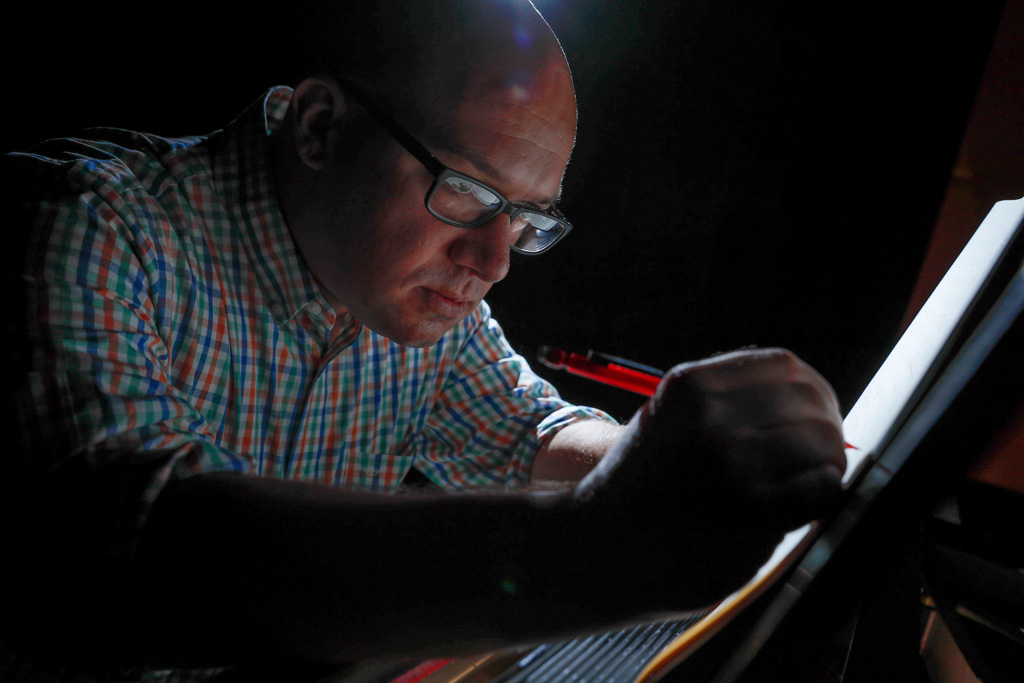 It’s hard to say when the music starts, exactly. Opening notes insinuate themselves on the listener, coming into focus as if emerging from a fog. Sounds blink in and out of existence in the space above a low rumble that builds into ripples of musical prose.

Listening to Anthony Donofrio’s “Between Event and Crisis” is a bit like chasing fireflies on a summer evening, both exhilarating and peaceful. Or, maybe it’s more pensive, like solving a riddle.

Sure, Donfrio says. Either way. No problem.

Donofrio sees composition as creation, not interpretation. For him, “Between Event and Crisis” is a piece of depth. A vibraphone solo is at the top, with other percussion taking the middle and the bass drumming at its core. In it, he sees the same non-linear, layered structure he discovered in David Foster Wallace’s novel “Infinite Jest.”

“Do I expect (an audience) to realize that? Absolutely not. That’s the way I was looking at it as I was making it, and that’s good enough for me. That’s all I’m worried about.”

An assistant professor at the University of Nebraska at Kearney, Donofrio blends an interest in literature and painting with his own art by translating compositional techniques from those forms into the language of music. His focus is solely on technique and structure, rather than creating meaning or eliciting emotion from his audiences.

His approach has earned Donofrio significant recognition, including dozens of commissions and acceptance into numerous music festivals. He was chosen for a composer workshop hosted by SEM Ensemble in New York, and was one of only seven composers accepted to the 2016 Bowling Green New Music Festival, an important Midwest event for New Music.

In 2014, his first year at UNK, Donofrio secured grants that expanded the university’s New Music Series and Festival. 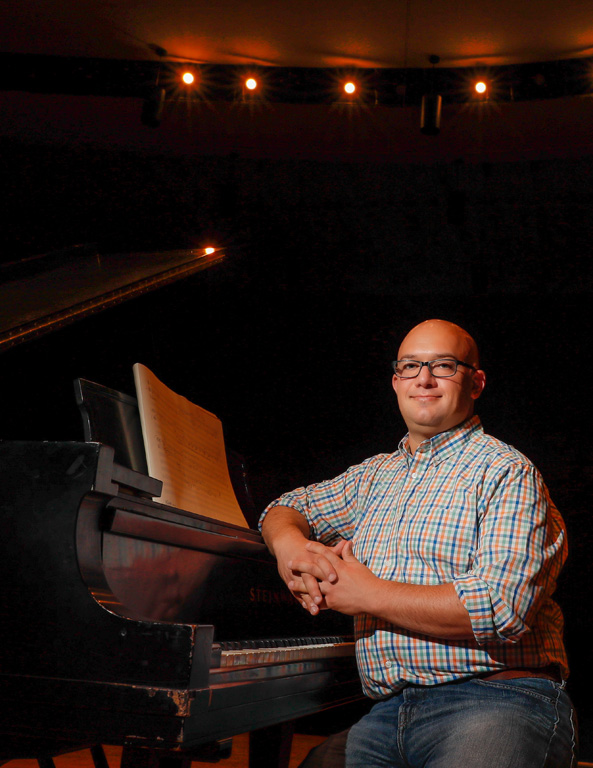 Reaching this point in his career has meant learning to listen to his own instincts and voice.

Donofrio said he’s been composing since he was a freshman on his high school’s drum line.

“I do not have a taste for marching band music now, and I haven’t since I was about 19,” he said. “Interestingly enough, the thing that got me into writing music was I was in the drum line in marching band because that’s what you had to do, and I wrote drum cadences.”

By the time he finished high school, Donofrio knew he wanted to teach music, but he didn’t want to conduct a band. A music composition major seemed like an obvious choice, but his band director discouraged it, saying he’d “never get a job.”

It wasn’t until he signed up for classes at Kent State University, and noticed all the courses in music theory, that Donofrio realized he wanted to be a college professor.

At first, Donofrio’s compositions took a cue from Gustav Mahler, one of his favorite composers. Even through high school, if Pearl Jam or Nirvana wasn’t on his stereo, it was a Mahler symphony.

“One of the big reasons I gravitated so much toward Mahler was I found that I enjoyed the massive, expansive pieces,” Donofrio said. The shortest Mahler symphony is about 50 minutes.

“Also, his pieces are on a grand scale. The eighth symphony is called the Symphony of a Thousand for a good reason. There are two choirs, eight soloists, and a massive, massive, orchestra. So just that extreme I felt a liking toward.”

Donofrio describes the music he wrote until the end of his doctoral program as a “loud, bombastic, aggressive style.” It was also programmatic, using musical passages to tell stories and symbolize ideas.

Nothing went as planned. Wrong notes, missed lighting cues, and a final whistle intended to symbolize memory fading off that just never happened. 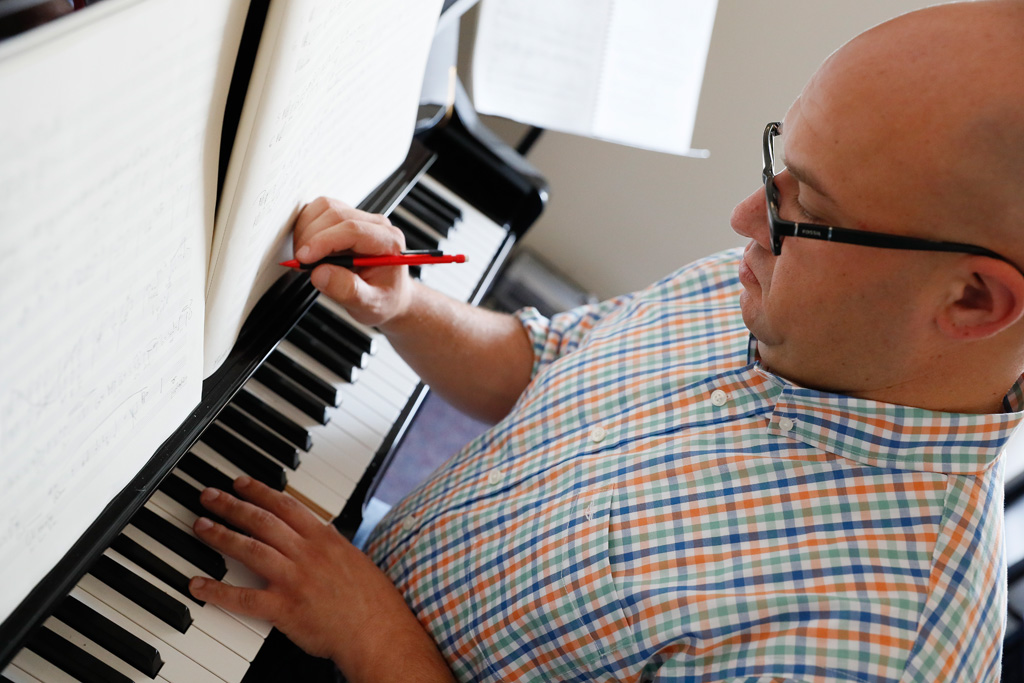 A new direction for his music came when a percussionist friend told him about Morton Feldman. A 20th century composer, Feldman was known for music inspired by the art of abstract painters such as Philip Guston and Mark Rothko.

But it wasn’t the subject, the feeling or the “meaning” of those paintings Feldman captured in his music. It was the technique and often the compositions.

Donofrio explained the process using the example of Feldman’s interest in Turkish rugs. Where a casual observer might see only a solid swath of blue in a rug, Feldman might study the dying technique, discover myriad spots of different blue tones blended into a mass, and decide to use a similar technique for a piece of music.

“What Feldman did was say ‘Ok, I’m going to take the same rhythmic passage, and I’m going to repeat it seven times, but I’m going to make it slightly different each time.’ Feldman’s not trying to get you to envision the Turkish rug, he’s taking that (technical) idea.”

Even better, from Donofrio’s perspective, was that Feldman wrote extremely long compositions.

“I realized you can make these expansive, beautiful pieces without having to be loud about it, and programmatic about it, and dramatic about it,” he said. “It was exactly what I needed at exactly the right time. I can sit and just listen to beautiful sounds for four and a half hours, and I don’t have to make any assumptions, and I don’t have to make any connections, and I can just get deeper and deeper into the sounds.”

Donofrio began thinking about his own interest in literature. Could he take musical inspiration from the compositional techniques used in novels? He began by reading James Joyce’s “Ulysses.” The day after he finished it, he started “Gravity’s Rainbow,” followed by many others. He immediately found techniques he wanted to try.

“Infinite Jest,” for example, offered a story without a clear beginning or end; just a window into the much larger world Wallace’s characters inhabit. And rather than building to a climax, the story delves deeper into their world, expanding readers’ understanding. That lent him the form for “Between Event and Crisis.”

The only problem with his new musical style, Donofrio said, was that he found it halfway through his doctoral dissertation. Though he tried to rearrange the music to reflect his new influences, he said he’s been much happier with the work he’s produced since.

Donofrio describes his process as finding a shape for the music, and those shapes are often suggested by literary references. When asked to write something very short, for example, it brings to mind the short story form, and writers such as Raymond Carver who make every word count.

Longer pieces call for the more intricate structure of a novel, or a complex painting such as Rothko’s.

Donofrio knows his approach to composition isn’t universal, and sometimes finds himself debating other composers who see emotional reaction as key to a composition’s success. 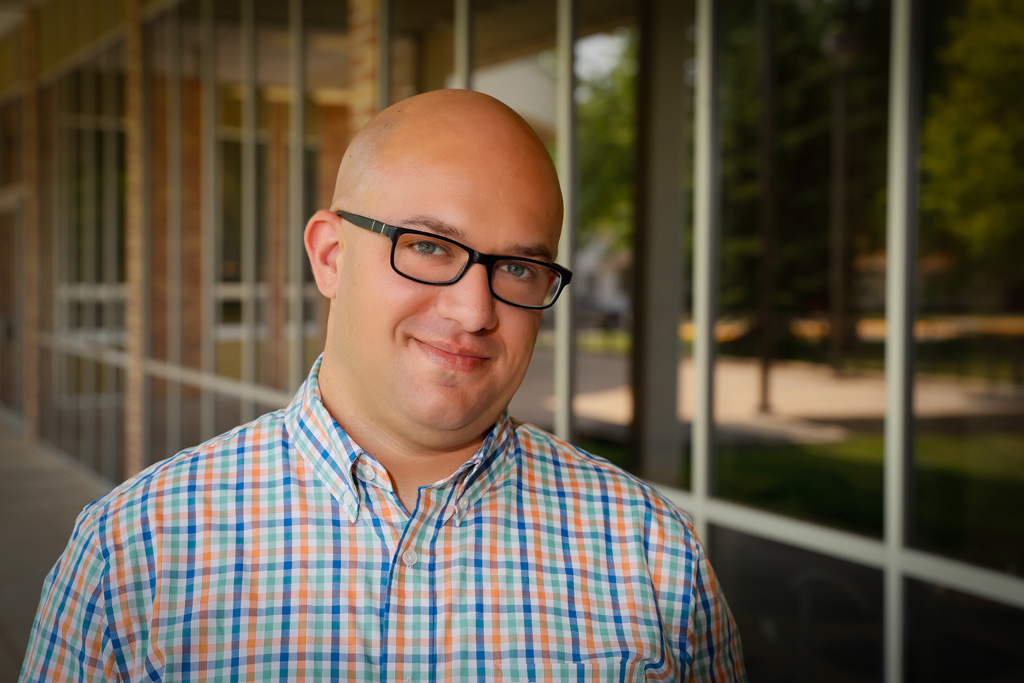 Breaking down resistance and building awareness of contemporary and experimental music is one of Donofrio’s goals for the New Music Series and Festival. While the festival has been at UNK for 15 years, Donofrio introduced several changes to increase its profile.

“The way the old New Music Festival went was you mailed in a score, mailed in a $20 check, and the pieces were selected on the basis of the available performers,” Donofrio said. He used a university seed grant to drop the entry fee, made all submissions electronic, and put a greater emphasis on the quality of the work.

Concerts are also now streamed online, which Donofrio said improves the experience for both composers and student musicians. “As soon as the 3 p.m. concert on Saturday was over (this year), a composer was online congratulating the student performer,” he said. “So a student is getting a personal e-mail from a nationally-known composer, saying ‘thank you for playing my piece.’”

The grant also funded the New Music Series, which has hosted nationally-known performers such as pianist Karl Larson and the Quince Contemporary Vocal Ensemble.

Response from the community, and especially students, is growing stronger.

“The students really get into (the concerts),” Donofrio said. “In the community, we’re getting there. There are community members we see at every single event.” Donofrio has even secured a commission from the Kearney Area Symphony Orchestra, and was recently asked to write music for the university’s bell tower.

In future years, Donofrio said, he hopes to further blend the festival and concert series, so that the festival becomes an end-of-series celebration. Grown into a more prominent event, it could work with Omaha’s Under the Radar festival and gain recognition as an outlet for today’s composers.

“It would be great if right in the middle of the country there was this (showcase) for new music. That’s kind of a long-term goal. We’ll see if it gets there,” he said. But in the meantime, “We’re showing composers from California, composers from Chicago, composers from New York, that it may not be big, but there’s a strong New Music thing going on here.” 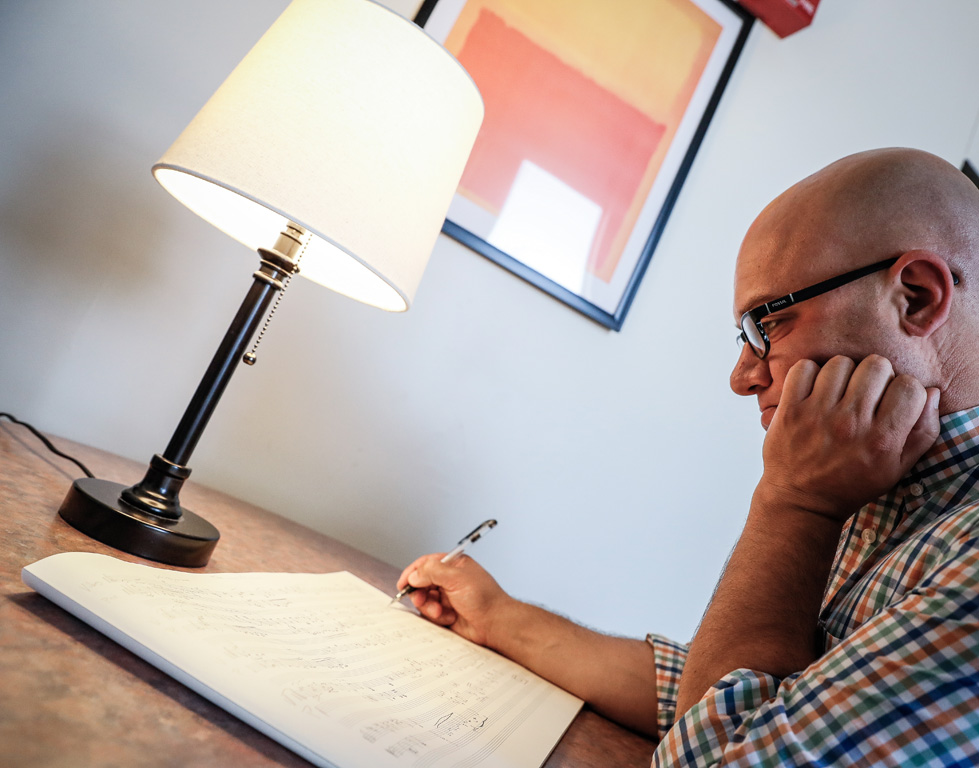 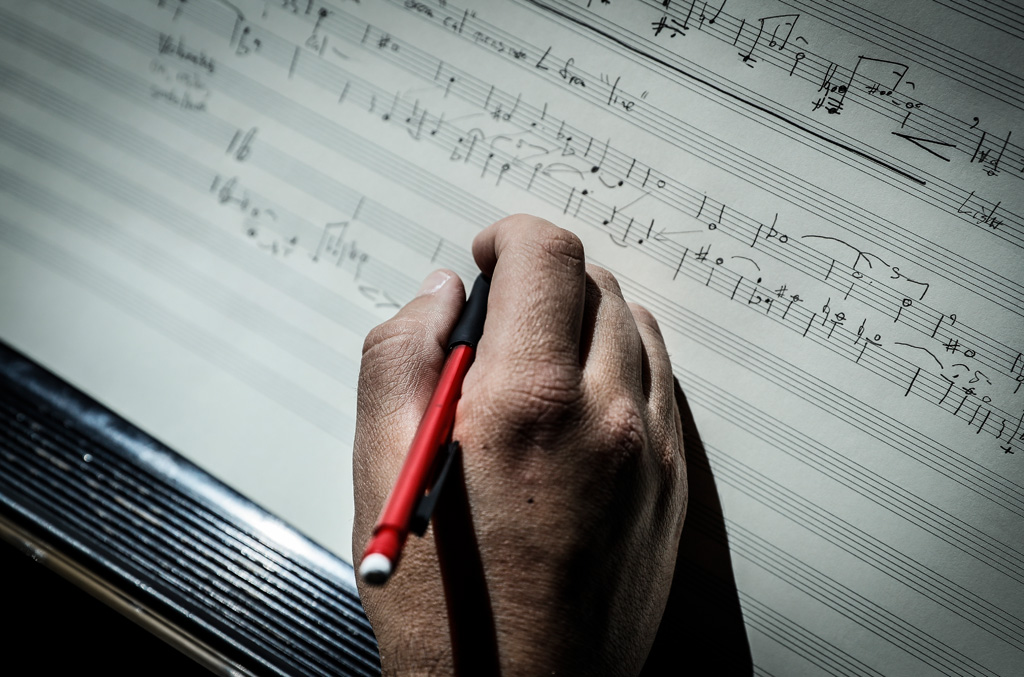 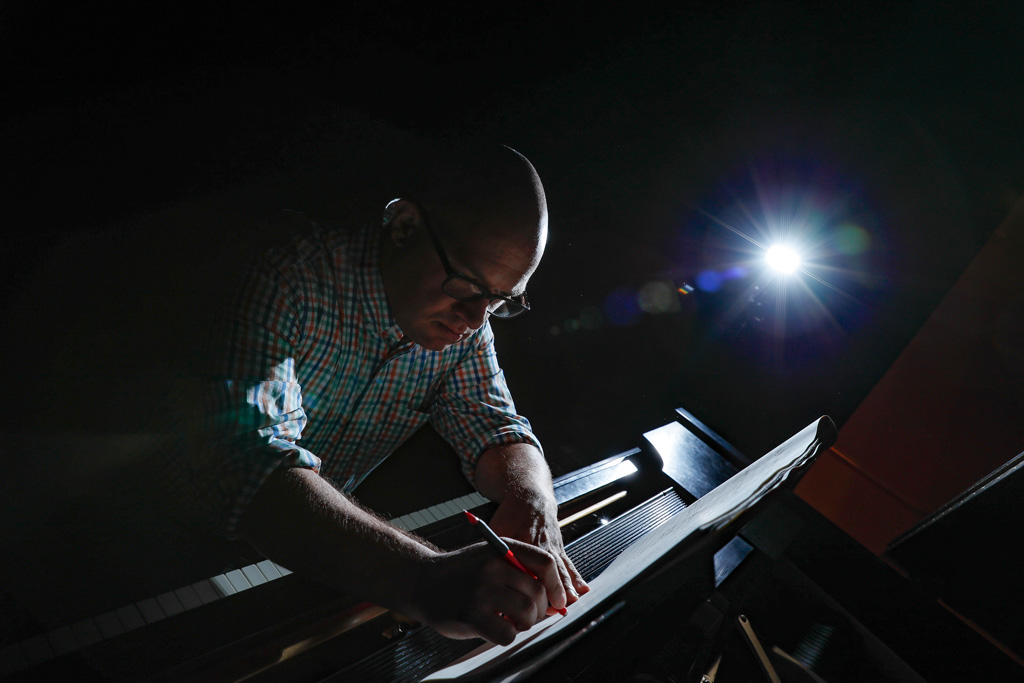