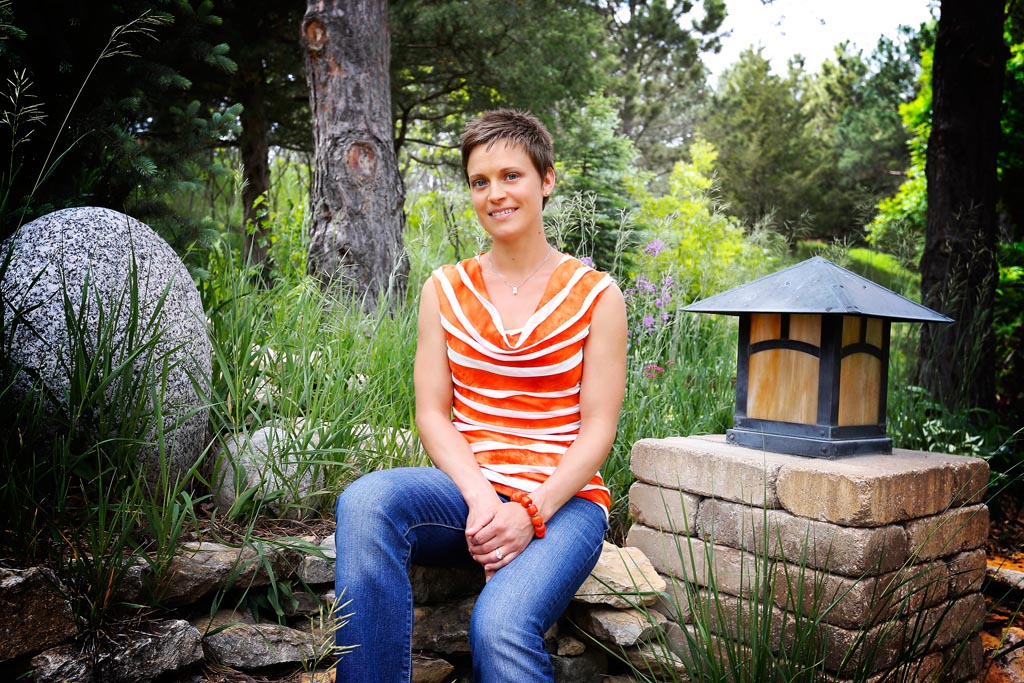 Bree Dority was a college sophomore when she realized a class was speaking to her way of thinking. That class, introductory economics, often is dreaded by business majors. Marketing, accounting or finance seem more “real world.” Economics has a reputation as being the “dismal science,” dreary and boring.

But Dority clearly remembers her epiphany during principles of microeconomics that “this is exactly how I think about making choices. This makes so much sense to me.” She was fascinated by the models used in economics, and although she avers that mathematics is not one of her strengths, she loves the applications and solutions that the discipline of economics offers. 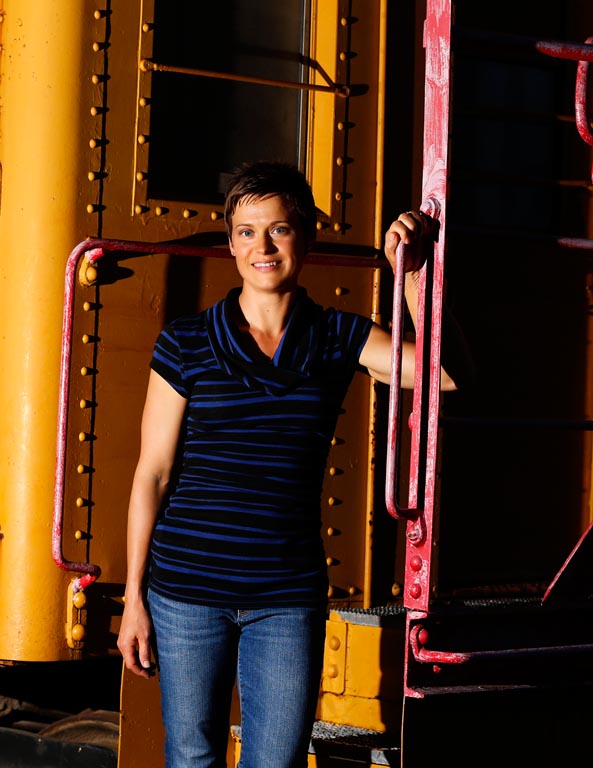 The only Husker in school history to score a perfect 10 on bars, she was the 2001 Big 12 bars and beam champion and a second-team All-American on bars the same year. Her academic efforts were also noteworthy, earning third-team academic All-America honors while also garnering three scholastic All-America awards and two first-team academic all-conference nods.

But she suffered a major knee injury her sophomore year, and an off-season back injury ended her gymnastics career after her junior year.

That’s when Dority turned her mind fully toward academics, and economics in particular. She landed a student job with UNL’s Bureau of Business Research, which focuses on issues specific to Nebraska or the region. And she found her calling.

“I really loved doing applied research on regional economic issues,” she said. “I just felt I was really making a difference and doing something important.”

Dority’s work involves collecting and examining sets of existing data, looking for patterns, correlations and links. While she has often been involved in creating surveys and other methods of collecting the data, she prefers analyzing established data. 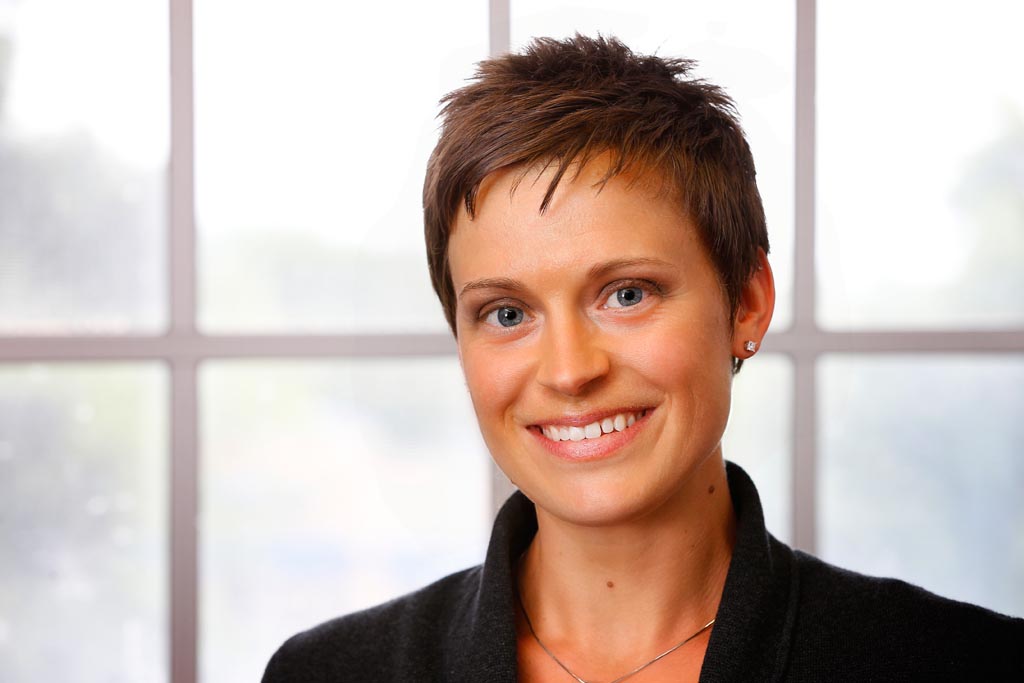 Dority earned bachelor’s (2003) and doctoral (2008) degrees in economics from UNL and along the way participated in research projects that were topical, relevant and timely.

For example, with a team, she analyzed whether Keno revenue dropped after laws barred smoking in Nebraska bars and restaurants. Keno is a type of gambling usually carried out in bars. When Lincoln first banned smoking in 2005, Dority’s research showed that keno revenue from bars in Lincoln did drop significantly, and revenue in “smoke-friendly” bars in nearby towns rose.

Now that non-smoking laws are statewide, and not limited to particular cities, a more recent study showed that the effects of non-smoking ordinances on keno revenue are less noticeable, she said.

Another study looked at the long-term savings from school consolidation, a perennial issue in Nebraska. That study, published in 2013, showed that rural school districts only experienced lower expenditures if multiple consolidations occurred, and the savings only began with the second consolidation. Dority, along with her colleague Eric Thompson, director of UNL’s Bureau of Business Research, were invited to present their findings to the Nebraska Legislature’s Education Committee.

Her doctoral work, funded by a grant from the U.S. Department of Agriculture, and conducted with UNL economics professors Mary McGarvey and Patricia Kennedy, was among the first to show a link between the sales of so-called “junk food” in schools during school breakfast and lunch periods and teen obesity. The work suggested that banning à la carte junk food sales during school mealtimes reduces the likelihood that teens will be overweight or obese by 18 percentage points. The researchers recommended expanding the list of banned foods to include candy bars, chips, cookies and high-fat snack foods.

The study also recommended that marketers of foods and beverages to children and adolescents limit or eliminate sales to that target market. They noted that marketers prefer to build long-term relationships with consumers, capturing the youth market early because it’s more profitable to maintain loyal buyers versus attracting new buyers.

By the time the school lunch study was published, Dority and her husband, Matt O’Callaghan, moved to Denver, where she accepted a “dream” job with the Analysis Group of Lakewood, Colo. While she loved the position, the fascinating work and the collaborative culture at Analysis Group, she and her spouse experienced in real life the economic principle of “opportunity costs.”

A bedrock concept in economics, opportunity costs are the sacrifices forced by one’s choices. In Dority and her husband’s example, they realized that while the choice of the job was ideal, it forced them to sacrifice other things they loved. They discovered that they didn’t like living in a highly populated community. They didn’t love the mountain climate and weather as much as they thought they would. And they missed Nebraska.

“We realized that maybe we were too Nebraskan at heart,” Dority said. She grew up in Kearney, and her husband in Hebron. They missed the plains, the skies, the grassland, the thunderstorms, the lack of people. When Matt landed a job near Kearney in 2010, she wrapped up her position in Colorado and joined him later that year.

Knowing there was a position open in UNK’s Department of Economics, but also knowing she had missed application deadlines and wasn’t qualified for the senior position, Dority bravely sent query letters, eventually landing a visiting professor position in 2010. She was hired in 2012 for the tenure track assistant professor position she currently holds.

College-level teaching had not been on her radar screen, she admitted, mainly because of a fear of public speaking. While she had taken one course in teaching methods in graduate school, she pursued a research track (even earning the outstanding dissertation award in 2008 from UNL’s Department of Economics). And she’s still a little nervous about teaching.

“I teach in ways that feel comfortable for me,” Dority said. “I try to treat my students like we were treated at Analysis Group. It’s a collaborative environment, a flat and fluid situation where we are all respected and we all learn from each other. I really want to learn from my students, and I always do.”

She tells a story that exemplifies that: On her first day teaching at UNK, she held the students for just 20 minutes. “I let them go early because I was basically scared to death,” said the former athlete, who held entire gymnasiums spell bound with her physical performance. “This senior teaching major came up to me after class and said, ‘hey, you will be OK. You just need to calm down and breathe. Your voice was really shaky.’ He was right. I did need to calm myself and just slow down. I can laugh about that now, but it was scary.”

Later, a colleague said to her: “We’re not surgeons. No one is going to die if we make a mistake in class. Just go back and correct yourself.”

Dority took this advice to heart.

“Even though in economics we do tons of math, doing math in my head is difficult for me. So by showing that to my students, they realize ‘oh, professors make mistakes, too,’ so students are more likely to be less fearful,” she said. 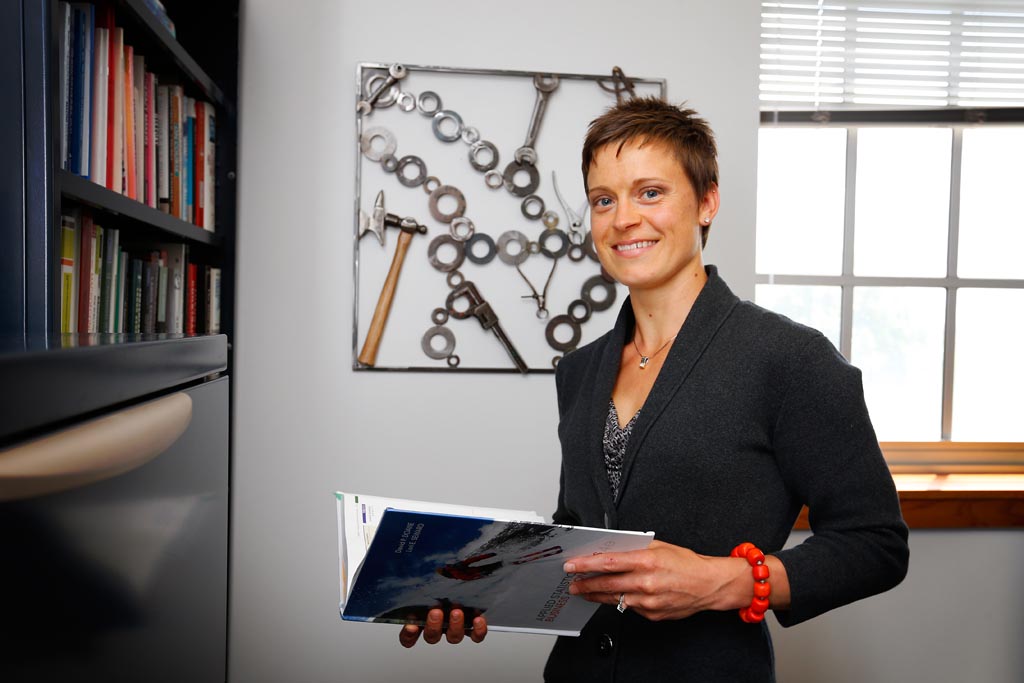 One of Dority’s former students is emulating her career path. Aaron Scholl, a 2014 UNK graduate, is enrolled at UNL this fall pursuing a doctoral degree in economics. Scholl first met Dority when he was a junior and already an economics major. Like her, he enjoyed the rigorous habit of mind that the discipline requires, but unlike her, he also enjoyed mathematics.

“I would very much say that Dr. Dority was, and still is, a mentor to me,” Scholl said. “The first thing that I noticed in her classes was the extreme passion she showed. She made the idea of collecting and interpreting research interesting. From day one, she was excited to have us in class and begin research projects.

“I was so impressed that she took the time to sit down with everyone, offer advice, and really show an interest in everyone’s projects,” added Scholl. “Having the support and collaboration with my professor made my assignments feel less like a ‘must’ and more like a ‘want’ to produce an impressive research paper.”

As part of an independent study project with Dority, the two examined existing downtown businesses in Kearney, and suggested possible business ideas based upon the demand of Kearney residents.

“This project concluded with me writing a report and presenting my research to the Mainstreet Kearney Economic Vitality Committee,” Scholl said. “I believe this project is still in continuation with marketing students at UNK.”

After several conversations with Dority, Scholl became convinced that he could find success in graduate school.

“I chose economics because there are so many interesting topics that I enjoy learning about,” said Scholl, whose short-term goal is to complete his Ph.D. “I find myself thinking about and implementing what I have learned in my economics courses in my everyday life. … Someday, I would love to end up back at UNK teaching economics where I got started on my future.”

Scholl’s interest in applying economics to everyday life no doubt grew from his collaborations with Dority. 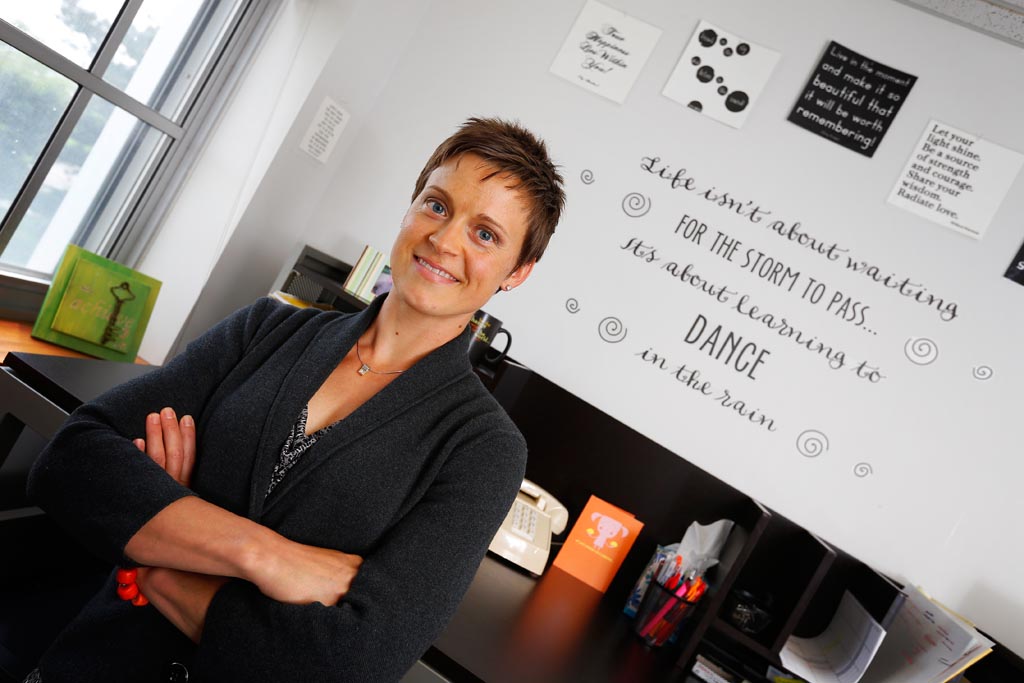 “I really don’t want to spend time doing something that will end up in some journal that just four other people read,” she said. “I want to do things that help my community.”

Typical of those projects is one Dority undertook to examine the economic impact of UNK on Kearney and its surrounding counties. Conducted by Dority and Shawn Kaskie, director of the UNK Center for Rural Research and Development, the study revealed that spending related to UNK total about $164 million annually. Those figures include $68.9 million in payroll and physical plant expenditures; $75.9 million in spending by UNK students; $13.6 million in spending by visitors to campus; and $5.9 million in spending from UNK-related units such as the bookstore and dining services.

And the two estimated that about $82 million in direct spending is increased by a multiplier effect of 1.41, meaning that for every dollar spent by a student, employee or visitor, another 41 cents is generated in the community. This is a conservative estimate, Dority notes.

The pair used data from 2009 for the study released by the university in 2013. UNK and UNK-related organizations employed more than 1,600 full- and part-time employees in fiscal year 2009-10. An estimated 730 jobs at Kearney area businesses are needed to support student and visitor spending. With an estimated employment multiplier of 1.3, the university’s overall employment impact is more than 3,000 jobs. Approximately 9 percent of the area’s non-farm employment can be attributed to UNK’s presence.

And, Dority and Kaskie note, UNK provides other benefits not captured in the study. For instance, students provide a workforce of part-time workers and interns, and faculty and staff provide service and leadership in the Kearney area. The report can be found at http://www.unk.edu/about/economic_impact_study/index.php.

In addition to that study, Dority has done similar economic development research for North Platte.

Her dream project, she said, would be “Nebraska-centric,” but it’s not so much the topic that intrigues her as much as the collaborations with others.

“What I miss most about my non-academic job is working with a group of like-minded people who wanted to accomplish an assigned task. I miss the teams that worked toward common goals to produce a great product,” she said. “So working with students is gratifying because they seem to appreciate and enjoy mentoring, and with a little coaching they respond well and run with the assignments.”

Now, Dority is preparing to teach her first fully online course. And she’s interested in two topics that are close to home: solutions for alleviating a severe housing shortage in Kearney, and looking at and suggesting solutions for income inequality in rural settings.

“Why can’t something cool start here and be emulated by folks on the coasts?” she asked. “I would love it if other people saw what we’re doing here and copy us.” 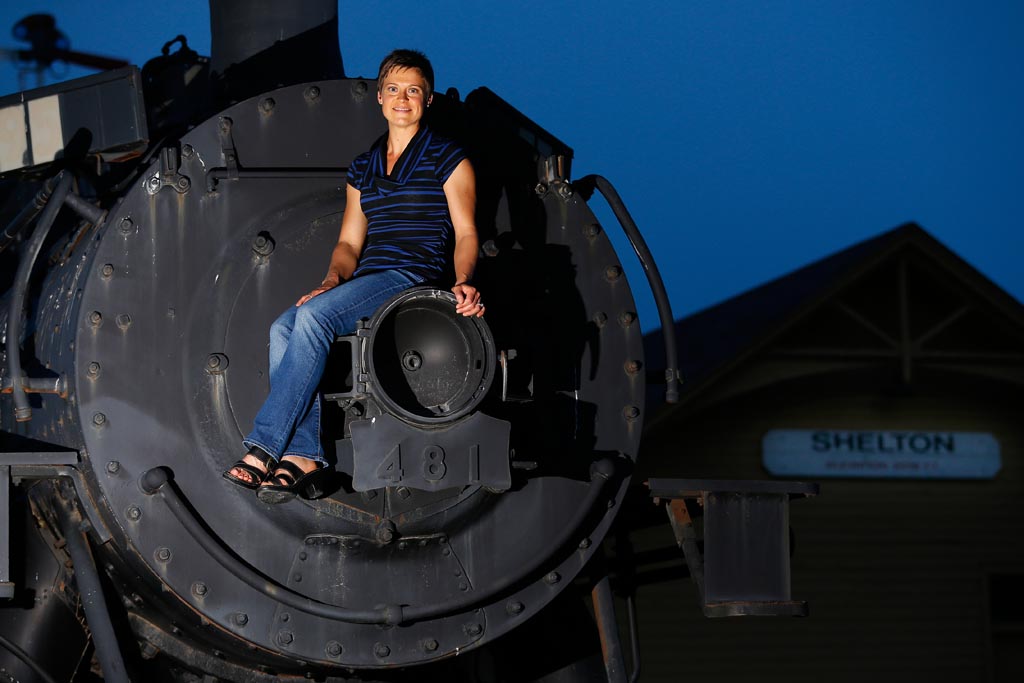