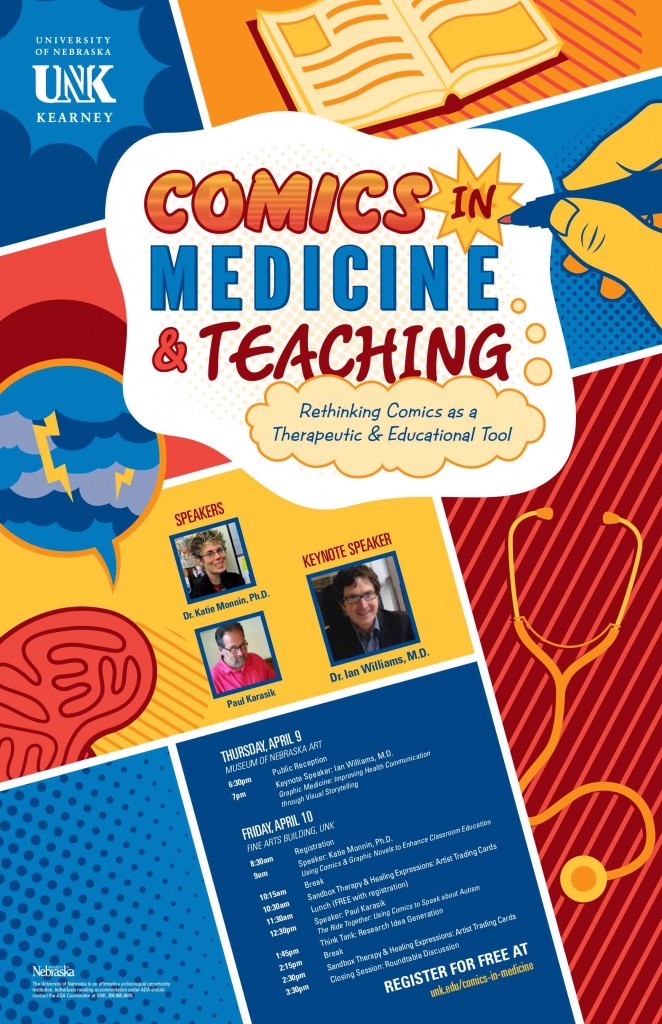 “Comics in Medicine and Teaching: Rethinking Comics as a Therapeutic and Educational Tool,” which is April 9 and 10 at the University of Nebraska at Kearney, will explore the educational and therapeutic uses of the comic book.

“Medicine is an art. And art, in turn, can be a medicine. Think of the physician as an artisan. A diagnosis is part observation, part testing, and part intuition…and therein lies the art,” said Paul Karasik, an internationally recognized cartoonist and teacher. “Art as medicinal therapy is widely understood. But using art to discuss medicine is a fairly under-utilized.”

Karasik will present “The Ride Together: Using Comics to Speak about Autism.” Karasik co-created “City of Glass,” a graphic novel adaptation of Paul Auster’s book. The graphic novel was named one of the best comics of the 20th century by The Comics Journal. With his sister, Judy, he created “The Ride Together, a Memoir of Autism in the Family,” which won the Autism Society of America’s Best Literary Work of the Year award.

The comic book in its modern form first appeared in the 1930s. It was not long before the form’s educational potential was used in “Classic Comics #1,” a 1941 adaptation of “The Three Musketeers.”

“Comics aren’t just for young or reluctant readers, they have grown since the 1980s into a very sophisticated literary medium as well,” said Susan Honeyman, English professor at UNK. “They also can contain layered perspectives and information, as they utilize both words and images, offering multiple narratives.”

Dr. Ian Williams, a physician, comics artist and writer from Brighton, UK, will give the keynote address. He will present “Graphic Medicine: Improving Health Communication Through Visual Storytelling” at 6:30 p.m. April 9 at the Museum of Nebraska Art.

“Comics tell stories, mostly, and stories can heal. Old time shamanic healers knew that. Stories can heal the listener and the teller. We are talking about healing from the point of view of making whole, or settling the mind, not about magically curing cancer,” said Williams. “People affected by illness find solace, sometimes, in reading about others’ experiences and people who make comics about their experiences can find that the prolonged, intensive act of making the comic can restructure their own story in their mind, helping them to make sense of it.”

Williams founded the Graphic Medicine website in 2007 and published his graphic novel, “The Bad Doctor.” He is co-author of the upcoming “Graphic Medicine Manifesto” and has contributed a series of comic strips to The Guardian newspaper.

The event will include a public reception, which will take place at 6:30 p.m. April 9 at MONA.

Friday’s events begin at 8:30 a.m. with registration in the Fine Arts Building at UNK. The first speaker will begin at 9 a.m.

“This is not just an event of gabbing experts with PowerPoint flow charts. This is comics,” said Karasik, who will draw an original cartoon for those who bring a book for him to sign. “Comics are fun to read. And the audience will be exposed to the hidden language of what makes comics fun to read. Secrets will be revealed.”

The event is free and open to the public. Those who register will receive a free lunch on April 9. Register at www.unk.edu/comics-in-medicine.

Additional quotes on Comics in Medicine and Teaching:

“It seems that art and medicine have interacted for ages. Formalizing and researching art’s role in medicine simply brings it to the forefront. This event creates a forum for demonstrations, experiences, education, discussion, and recognition of art forms in medicine and education.” – Krista Fritson, psychology professor, UNK

“The reading public need to be aware that comics are a vaster medium than generally thought–not just superheroes and animal funnies but an opportunity for sophisticated works with great literary and social value. But they also have immense therapeutic value for students, patients, anyone interested in a little bibliotherapy. Those of us who are convinced we can’t draw can actually get a lot out of journaling and doodling. We can create visual narratives in panels with stick figures and still convey much more than in simple words.” – Susan Honeyman, English professor, UNK

“Research identifies comics and graphic novels as successful with reluctant readers and English as a second language students. Also, in my research, connections are being made between the disciplines and self-esteem is building through the creation of comics/graphic novels.” – Lisa Kastello, assistant professor of art education, UNK