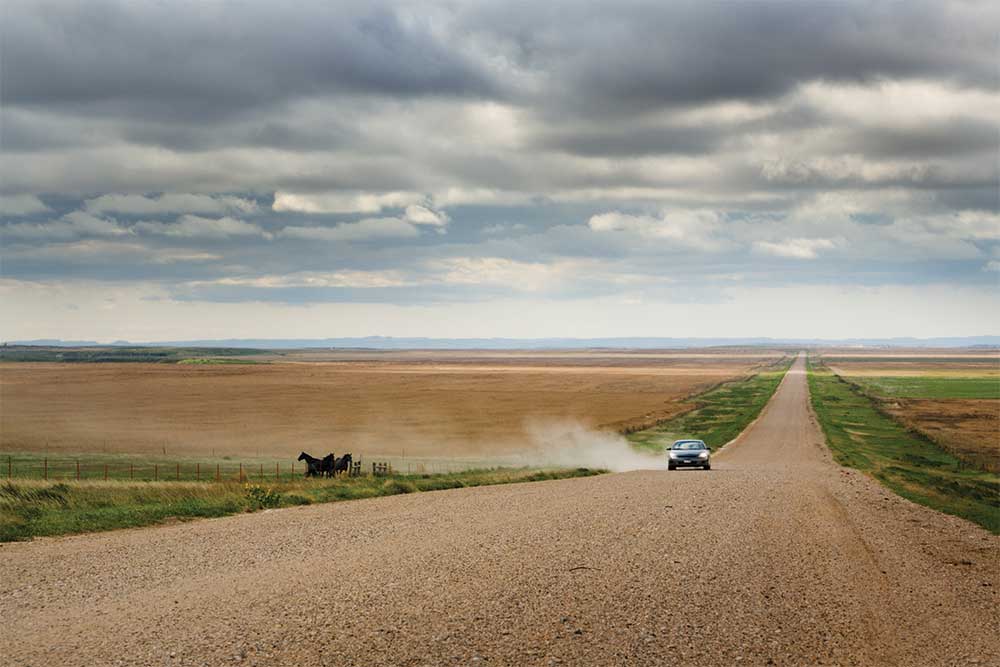 The girl was 11, maybe 12 years old. But she braved the pain as a medicine man cut the skin of her chest and placed pegs through the openings. She would dance, tied by those pegs to a cottonwood tree, until her skin tore free.

Though he’s attended many sun dances on the Pine Ridge reservation since that day, David Hof said that girl’s story has stuck with him. It’s a powerful reminder that true understanding comes in the real world, not in offices or books.

“She was piercing…because her younger brother was 7 and he had leukemia and was going to die,” Hof said. By taking part in the sun dance, the girl was sacrificing part of herself for her brother. “If you had just walked in and saw that you’d think ‘oh, how inhumane, how awful,’ I can’t believe this culture still embraces this. Spend a week with them and you’ll say ‘I got it. I got it. It might be different, but I got it.’ ”

Leading professors and graduate counseling students from the University of Nebraska at Kearney to Pine Ridge each summer is just one of the ways Hof promotes a hands-on approach to his profession. A professor in UNK’s school psychology and counseling program since 2000, Hof has published extensively and maintains a private counseling practice.

“I specialize in high-risk kids. I work with the naughtiest kids this state produces,” he said. Counseling children exclusively, Hof specializes in treating kids with sexually deviant behaviors. After 16 years, he remains confident that people can change for the better, especially if he can “catch them while they’re young.”

WEARING MANY HATS, INCLUDING ADVOCACY

A specialization in the needs of high-risk youth links  Hof’s many projects, which also reflect his belief that counselors should advocate for their clients. And to be effective advocates, he said, counselors have to understand and accept  cultures that may be quite different from their own.

That’s why, though Hof and his group may wear many hats while on the reservation, none of them ever say “tourist.”

The Pine Ridge Intercultural Service-Learning Immersion focuses on making participants part of the community. They live with Dallas Chief Eagle, a school counselor at Pine Ridge and one of the architects of  the program.

“One of the things Dallas Chief Eagle told us was that ‘you don’t get to be tourists. We’re not going sight-seeing, we’re not seeing the Native Americans in their native areas, what you’re going to do is participate.’ And so what we set up, then, is students actually do a ‘sweat,’” Hof said. They watch a sun dance, visit schools and do whatever the rest of the community is doing.

Instead of planned service projects, they simply do what’s needed – construction, giving someone a ride or leaning up. One year, Hof and a few students even fixed  Chief Eagle’s plumbing when it broke during their stay.

Real-world experiences are important to Hof’s  counseling philosophy, which stresses the need for advocacy. Advocacy is a counselor’s work on behalf of his or her clients – not just individual clients, but the social groups to which they belong. Counselors who are social advocates argue for policies and try to enact changes that benefit those groups.

Pine Ridge is plagued by high rates of alcoholism, drug use, poverty and school dropouts. It’s also a place rich in history. Any counselor who wants to help that group of people, Hof said, must first understand the culture  and the situation first-hand.

Hof explained his ideas on advocacy in a 2009 article, “Advocacy: The T.R.A.I.N.E.R. Model,” published by the Journal of Social Action in Counseling and Psychology. Hof worked four years to develop the model it outlines. It gives seven steps counselors can take to make advocacy part of their practices – target needs of a client group, respond to those needs, articulate a plan, implement the plan, network while training, evaluate and redirect efforts. TRAINER, Hof said, gives counselors a step-by-step guide for advocacy that hadn’t existed before. The model has led to several other articles and refereed national presentations on advocacy.

Another major publication that’s led to a series of presentations was Hof’s “Deviant Sexuality in Children and Adolescents: A Protocol for the Concurrent Treatment of Sexual Victimization and Sex Offending Behaviors.” Published by the American Counseling Association in 2009, the protocol was yet another way for Hof to advocate for his clients.

“If I had a claim to fame, that would be it,” Hof said of the article, which lays out a method for treating both a child’s behavior, and the victimization that may have caused that behavior, at the same time.

About 60-80 percent of children who are sex offenders were first the victims of sexual abuse, Hof said.

But while counselors have long known about that connection, the traditional approach has been to treat them as offenders first, gearing sessions toward stopping them from re-offending. In concurrent treatment, sessions deal from the beginning not only with children’s behavior, but the reasons for it.

“It’s all tossed in together. So you might talk about how this person was sexually abused when they were 8, they get talking about how angry they are, their anger connects to the relapse prevention plan where they’re saying ‘it’s my anger that’s one of my biggest triggers that causes me to offend’ and so that’s the importance of linking those together because otherwise you miss that. It’s getting to the core,” Hof said.

He has presented on concurrent treatment at national conferences, including the 2011 Association for Counselor Education and Supervision Conference and 2010’s American Counseling Association Conference.

Hof’s method of concurrent treatment developed early in his career, while a clinical supervisor in Minnesota.

“We worked with the worst kids this country produces. We worked with baby rapists, murderers, everything,” Hof said. In that real-world crucible, he and the other counselors found they could be more effective, more quickly, if they addressed the root causes of the children’s problems along with their behavior. But they didn’t have empirical research to prove the method worked. That’s what his protocol offered.

“We worked with the worst kids in the world and we took a look at the two years’ and seven years’ recidivism rate, and we were 82 percent successful at not having re-offense, so it can be done,” he said.

Each time Hof presents his curriculum, he said, he “tweaks” it based on previous feedback. His goal is to write a workbook on concurrent treatment. Like all his efforts, he wants it to be a hands-on tool for practitioners.

“I think what we’re finding is that the more students have the opportunity to experience these things, the more likely they are to do them in their own careers,” Hof said, adding that his experiences at Pine Ridge have not only changed the way he teaches, but the way he thinks.

“I learn so much first probably about myself, second about the culture, and third about our students,” he said. The experience isn’t for everyone. While many students signed up for the first trip in 2007, numbers plummeted the next year when students heard stories about the activities and the conditions.

Changes in the orientation helped, Hof said, and this year’s group was bigger than ever with two people from the community and three members of UNK’s Native American student group added to the mix.

“What we continue to hear is it is one of the most meaningful experiences they’ve participated in, in helping them really contextualize culture. So if they have an openness to accepting native culture, then that easily parlays into middle eastern culture, or (any other culture),” Hof said. “So the translatableness of the experience seems to be one of the blessings. It’s that ‘OK I risked to do that, I put myself out there. I survived. I can survive this too. I can be open to this one too.’ ”

And from the beginning of the project, Hof said, Dallas Chief Eagle made it clear that openness is what the people of Pine Ridge want from the UNK group: “He said ‘Come here, learn our ways, just understand our people, and take that back. That’s advocacy.’ ”