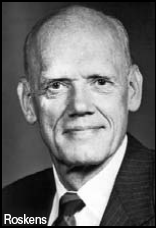 President Emeritus of the University of Nebraska system, Dr. Ronald W. Roskens, was not only the keynote speaker at the UNK winter commencement ceremony last month, but also the recipient of a NU honorary doctorate degree.

While NU president, from 1977-1990, Dr. Roskens developed faculty exchange programs for the NU campuses that encompassed partnerships with Kabul University in Afghanistan, and with higher education and medical institutions in the Soviet Union and China. His global vision further served him in 1990, when former President Bush appointed him administrator of the U.S. Agency for International Development (USAID), a program that provides economic and humanitarian assistance to more than 100 countries throughout the developing world.

In 1993, he became president and CEO of Action International, a think tank of 35 former heads of state or government. Two years later, he was named honorary consul general of Japan and was elected to the board of the Friends of the World Food Programme, a United National agency headquartered in Rome, Italy.

Using his experience in the international community, Dr. Roskens established Global Communications, an Omaha-based business consulting firm. In addition, he has served as director of ConAgra Foods, the Russian Farm Community Project and the Capitol Federal Foundation of Topeka, Kan.

Further, he has served on numerous national boards, including a term as chair for the Board of the American Council on Education, an organization that represents more than 3,000 universities and colleges, and as president of the Association of Urban Universities.He was a member of the Young Presidents Organization (YPO) and is currently a member of the Chief Executives Organization (CEO).

NU bestows an honorary Doctorate of Humane Letters to individuals who have attained achievements of extraordinary and lasting distinction.Dr. Roskens nomination, endorsed by UNK’s Faculty Senate, Office of the Vice Chancellor of University Relations, and the Chancellor, and finally, the UN Board of Regents, was given in honor of his distinguished service to the University system and the state of Nebraska.