KEARNEY – It’s 7:30 a.m. and the sun is slowly rising outside Horizon Middle School.

The temperature is still a brisk 52 degrees as students and staff march toward the building to start another day.

“We’re giving out free high-fives,” he adds before slapping hands with a passing student.

It may be early in the morning, but Drake Sherman and his University of Nebraska at Kearney teammates are already brightening the day for dozens of middle schoolers.

“I just like seeing them smile,” the 6-foot-1, 295-pound redshirt sophomore said. “Hopefully this makes their day a little better.”

That’s the goal of High Five Friday, an outreach event UNK head football coach Josh Lynn started more than two years ago. Throughout the academic year, his players visit local elementary and middle schools on Friday mornings to interact with students and staff and strengthen the relationship between the university and community.

“It’s something small that we can do that gets us out in the community and creates another connection between UNK and Kearney. I think it’s good for both us and them,” said Lynn, who’s led the Lopers since 2017.

This week, it was the offensive linemen’s time to shine as they posed for photos, answered questions, shared words of encouragement and, of course, handed out plenty of high-fives.

“It’s cool that they took the time out of their own day to come see us,” Horizon student Addison Garringer said. “And it’s pretty early in the morning, too.”

“The UNK football players are ‘heroes’ who our students look up to. They have demonstrated excellence in a sport that many of our students want to be great at as well,” Mundorf said. “For these college kids to get up early, get out to the schools and brighten the day of our students is a testament to their desire to serve as community role models and supporters of the youth in Kearney. It means a great deal to our students and we can’t thank Coach Lynn, his staff and his players enough for being involved in our schools.”

“It’s a great opportunity for our students to meet Lopers,” he said. “It gives these kids a chance to see those guys in a different environment and see the university that’s in their hometown and what that could potentially be in their future.”

The UNK student-athletes benefit from the experience, too. Lynn loves to watch his players when they leave the field and step outside their comfort zones to connect with community members.

“Some of them are kind of shy, but once they get here, it kind of flips a switch and changes their attitude,” he said. “They all walk out of here with a smile.”

High Five Friday has spread across the UNK Athletics Department. When the football players aren’t available, other teams are more than willing to fill in. Volleyball, men’s basketball and women’s basketball have all participated this school year.

Lynn has also received requests from area schools outside Kearney, opening the door for a possible expansion of the event.

“We want to try to reach as many people as we possibly can,” he said.

After all, there’s no such thing as too many UNK fans.

“By getting the community involved and getting them excited about the Lopers, hopefully more people come out to the games and support us,” Sherman said. 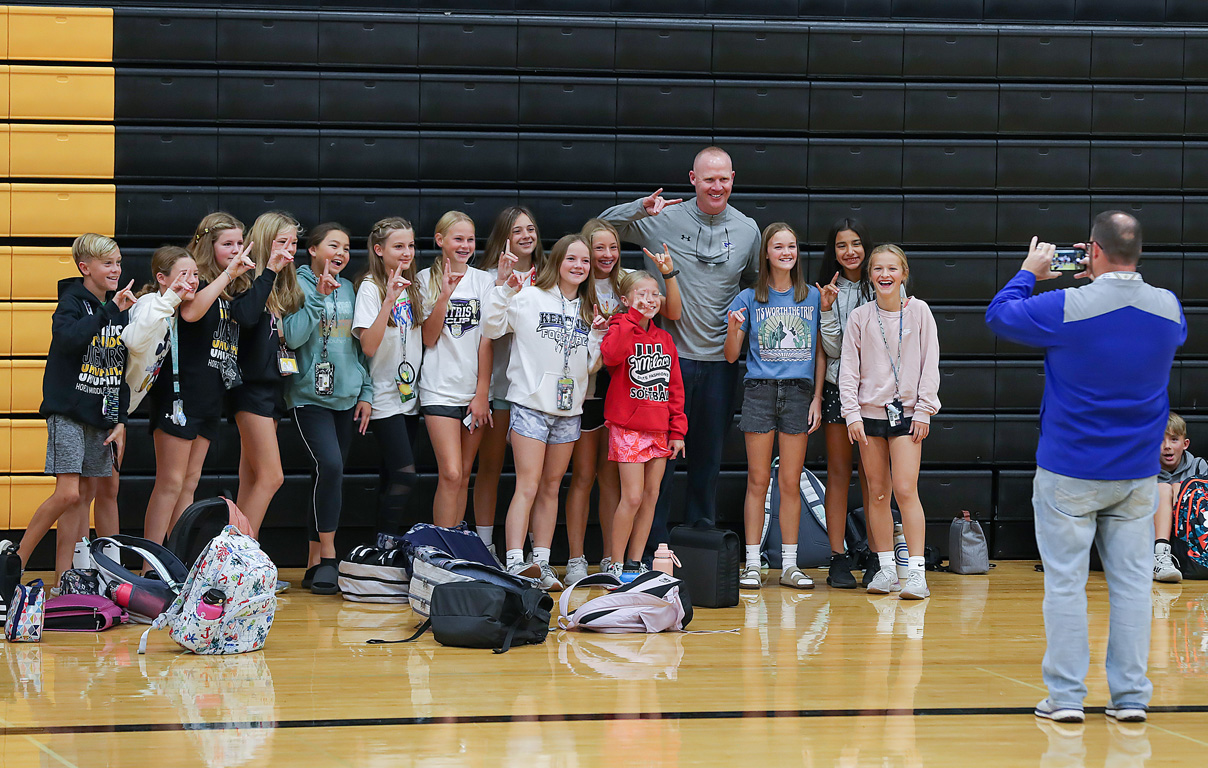