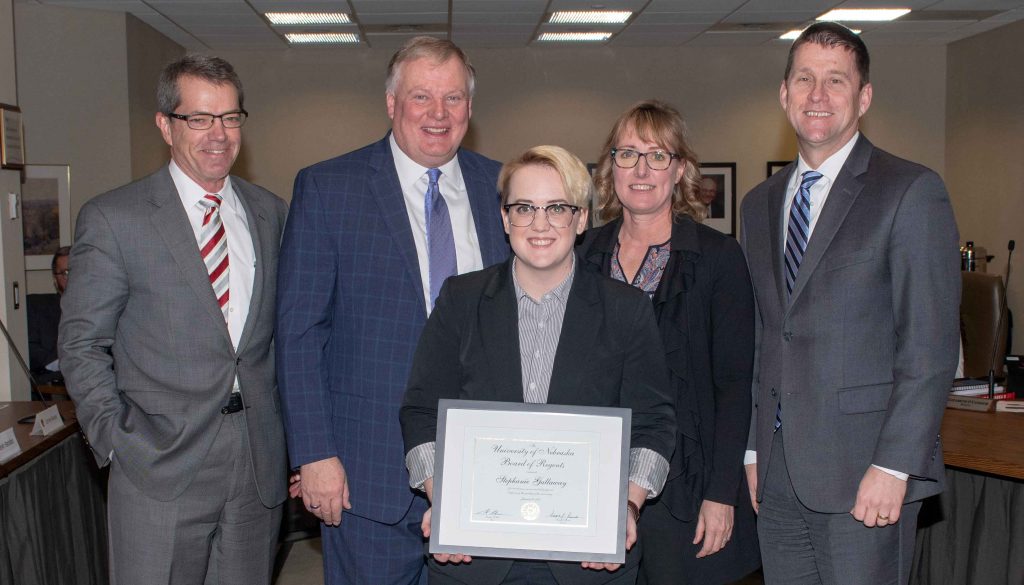 KUDOS awards recognize university staff for their professional expertise, service and “superior dedication” to UNK and University of Nebraska. It is the university’s top staff award.

Gallaway has been a member of the UNK communications and marketing staff since 2013.

She has produced a massive library of promotional videos, commercials, short documentaries, highlight reels, live-streamed events, sports-action highlights and events packages. One of UNK’s favorites, Chancellor Kristensen’s “Carpool Karaoke” video, has been seen, shared, liked and commented on by more than 50,000 people, including producers at James Corden’s “Late Late Show.” She also was responsible for the recent sendoff video for Regent Emeritus Bob Whitehouse.

Gallaway has “demonstrated how to turn the process of video-storytelling into an art, and raised the profile of UNK by capturing the sights and sounds, voices and emotions of students, faculty, staff, alumni, supporters and fans,” her nomination letter read.

“She also completed training to receive her FAA drone-pilot certification, literally taking UNK’s videos to new heights,” Bartling added. “The volume and quality of her work speaks for itself, but Steph also uses her leadership and skills to mentor student interns, who are thriving under her direction.”

Gallaway earned her bachelor’s degree from Webster University, recently completed a graduate certificate in public relations and social media, and she is studying for her master’s in integrated media communication.

She was recognized and given the KUDOS award at the Board of Regents meeting, which was attended by UNK Chancellor Doug Kristensen, NU President Hank Bounds and Bartling, among others.