KEARNEY – A study led by the University of Nebraska at Kearney shows the economic impact of tourism in central Nebraska during the sandhill crane migration was $14.3 million in 2017.

The annual migration also is responsible for 182 full-time jobs and generates $379,000 per year in property, sales and lodging tax revenue across the region.

“Tourism is Nebraska’s third-largest revenue source, so it’s important for our local economy,” said study coauthor Bree Dority, associate dean of the UNK College of Business and Technology and associate professor of economics. “This is one aspect of tourism, and it’s particularly important for the central Nebraska region.”

Each spring, more than 600,000 sandhill cranes stop along Nebraska’s Platte River valley to rest and refuel before flying farther north to breeding grounds.

Area organizations devote resources to crane preservation, education and watching, which generate donations and grants. The cranes also attract tourists in March and April who spend money in hotels, restaurants and at other businesses.

The study found that about 46,500 people visited during the crane migration in 2017, and 93 percent – or approximately 43,300 – were non-Central Nebraska residents. Those visitors spent an average of $93.37 per day.

Together, the overall economic impact of the annual crane migration on Central Nebraska was $14.3 million in 2017, supporting 182 year-round equivalent jobs.

“This was a great experiential learning opportunity for students,” Dority said. “These students are going into communication fields, so it was particularly important for them.”

Visitors were asked where they were from, and about their typical daily spending on hotels and lodging, food and drinks, gasoline, shopping and gifts, other entertainment and recreation, and other spending in central Nebraska.

The study was completed by UNK College of Business and Technology and University of Nebraska-Lincoln for the Nebraska Central Platte River Region.

Eric Thompson, associate professor of economics and director of the Bureau of Business Research at the University of Nebraska-Lincoln, was among co-authors. Also co-authoring the study were Lisa Tschauner and Shawn Kaskie with UNK’s Center for Entrepreneurship and Rural Development. 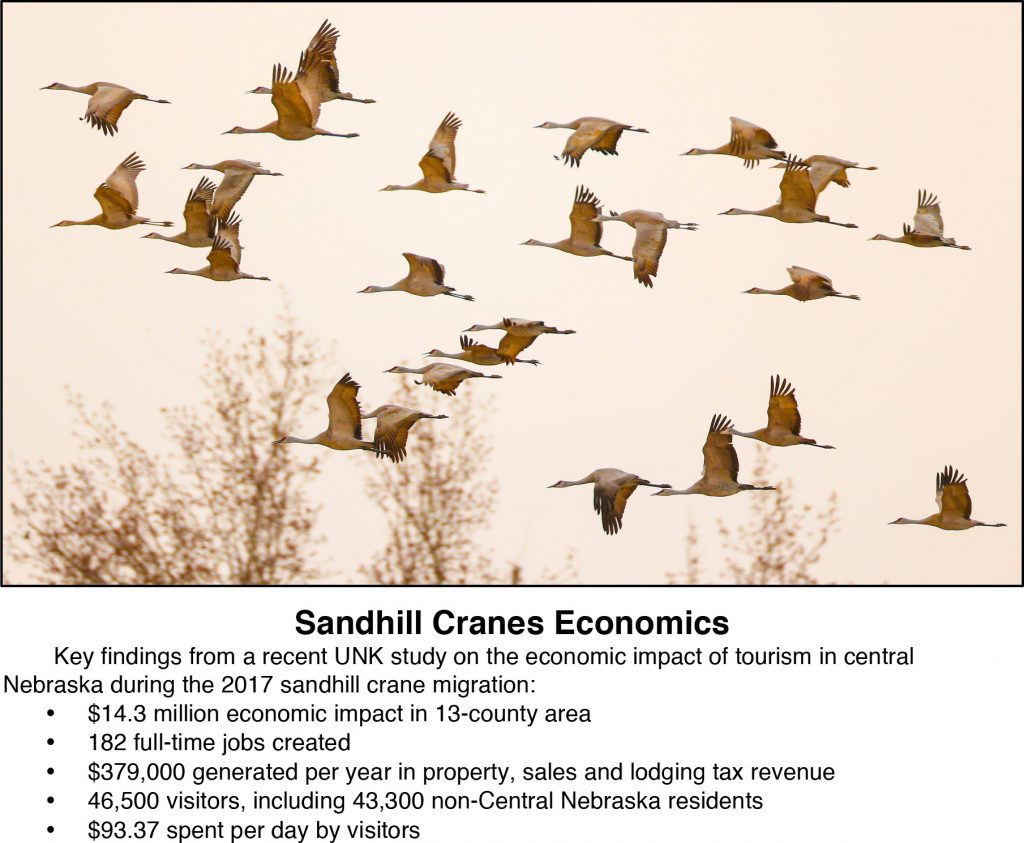