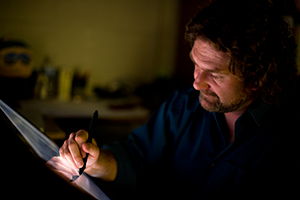 Dungeons and Dragons players long recognized Lolth, Demon Queen of Spiders, as a thin and sinewy creature. The evil goddess had been drawn long and lean since 1978, when she was introduced to the role-playing fantasy game.

“She’s only five feet tall, but she has an overwhelming aura when she walks in a room,” Stanko said. “It just didn’t make sense that she’d be waiflike.”

Stanko’s illustration of Lolth for a 2008 Dungeons and Dragons Player’s Handbook shows her muscled and armored. Her bearing is regal, her long white hair glowing as she looks down at the viewer – maybe her victim – somewhere near her feet.

Working in his studio on the campus, Stanko laughs when he talks about the uproar he created with that image. His art director at D&D loved the idea, and kept asking him to give the goddess an even fuller figure. Only later did he find out that director had to fight with other executives for months to get the drawing approved.

It may sound strange to hear adults in heated debate over a demon spider’s curves, Stanko explained, but that’s how important art is to the fantasy gaming industry. That is one of many lessons Stanko has learned as an illustrator. Since breaking into the industry about five years ago, Stanko has created artwork for the well-known games—Dungeons and Dragons, Star Wars Galaxies, Legends of Norrah, World of Warcraft, Lord of the Rings and Magic: The Gathering. 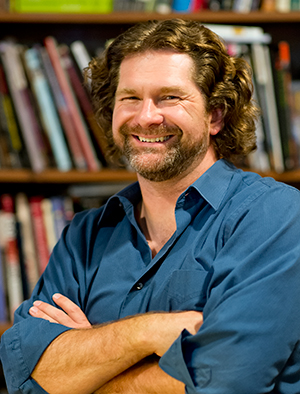 An associate professor in the Department of Art and Art History, Stanko has built a solid reputation for his illustra­tions. He earned a Chesley Nomination in 2008 for the oil painting “Fall of Tink” and has received awards four out of the last five years at the juried Gen Con Art Show.

He has had two illustrations in each of the last two issues of Spectrum, a journal that annually showcases the best fantasy art, and two of his illustrations are in a Dun­geons and Dragons style guide. The confidential guide is for artists only, to demonstrate how they should create the game’s illustrations.

“Having my work in there means that when they say ‘this is the bar we want you to reach,’ my work is the bar,” Stanko said.

Perhaps his biggest vote of confidence, though, has come from fans who respond enthusiastically to his art on their playing cards, and in their books and magazines.

“Artists are part of the game,” Stanko said, and there are fans who not only know the artists, they check to see what artists will be at fantasy conventions and bring cards to be signed. At a recent event in the Philippines, Stanko said, he signed cards for two days, eight hours a day, and there was always a line.

“I don’t care how hungry you are or how tired you are, you have to sit there, and take that 15 or 20 minutes with them, and make it special,” he said.

Stanko started as a gaming fan, when he was a kid and everyone was crazy about a game called Pong. He played all the classic games growing up, including the very popular role-playing board game Dungeons and Dragons. He was also a strong art student.

As an undergraduate at UNK, Stanko sent his art to the company that produced Dungeons and Dragons. Stanko said his drawings weren’t very good, “but the art director took pity on me and gave me some work.” Throughout college, Stanko received $75 apiece for thumbnail-size “spot illustrations” that ran as chapter starters in a magazine for D&D players. 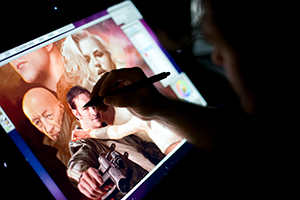 “That’s how I paid for pizza, and going out,” Stanko said, shaking his head at a younger self who thought break­ing into the illustration business would be easy. Instead, he started collecting rejection letters after college.

“I got really angry at the illustration industry, because I was young and dumb, and I was looking at people—who, in my mind, weren’t as good of draftsmen as I was—getting jobs,” he said. He quit illustration for five years, working solely as a graphic designer creating logos, websites, outdoor graphics, etc. While graphic design involves some of the same skills as illustration, Stanko explained, it is mainly for commercial clients. There is less artwork and more layout.

Then, an adjunct teaching job at Metro Commu­nity College in Omaha convinced Stanko he enjoyed teaching more than doing graphic design. While earning a master of fine arts degree from Virginia Commonwealth University, Stanko found his way back to illustration. He credits the switch to his thesis adviser and to his suitemate Marius Valdes. An artist with a much different style, Valdes showed Stanko there is more to illustration than a tight drafting technique.

“You’ve got to be able to tell a story,” Stanko said, and Valdes could do that. “He was able to bring worlds into his images.”

Stanko said it was an easy decision for him to specialize in fantasy illustration, not only because of his background with the games, but because of the challenge that genre pres­ents. Fantasy illustrations not only have to depict characters, but fantastic worlds and elaborate situations. 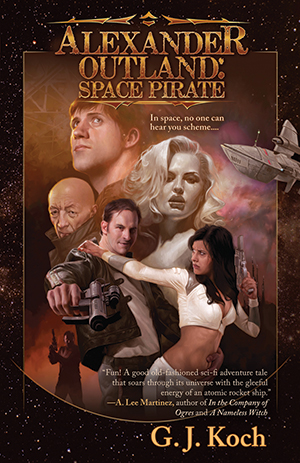 Still, Stanko did not have immediate success when he began marketing his work at fantasy gaming conventions. He recalled his first meeting, with an art director for Magic: The Gathering. The director said his work lacked a consis­tent style, and advised Stanko to go back in the studio and create “four good pieces.”

“It was a punch in the stomach,” Stanko said, but it was the direction he needed. Among the paintings Stanko brought the next year was the award-winning “Fall of Tink.”

The next year, Stanko attended a master class with instructors he describes as “icons.” He said the experience changed his work dramatically.

“My work really exploded. My work really came together after that master class,” he said, adding he learned more than technique. He also learned about the relationship fantasy/science fiction artists have with their fans, and the important role they play in the games. “I learned they’re not only great artists, but they were great people, and I learned that who you were was almost as important as your work.”

Since then, Stanko has built many relationships in the industry, and his work has appeared in many forms. For the online card game Legends of Norrah, Stanko has illustrated dozens of virtual cards that feature the game’s characters. His illustrations have appeared in Dungeons and Dragons books and magazines, while the art he has done for games such as Magic: The Gathering has been printed onto playing cards. Other illustrations have gone on to be featured on board games and in online articles.

Stanko’s illustrations begin with photographs of models. He sketches his images using Photoshop; the photo gives him a posed figure, but the character’s features, clothing and surroundings spring straight from Stanko’s pen.

Once his client approves a value study, Stanko adds color using a program called Painter and a Cintiq – equipment that allows him to “paint” on the digital image. Stanko strives to capture not only the characters’ “looks,” but their backstories.

For the cover of the book Orion and King Arthur, Stanko drew the young Arthur grasping his sword awk­wardly, his arms held in close and his eyes determinedly on the blade as he draws it out. Viewers see all at once the boy he is, and the king he will be. And in Stanko’s image of Lolth, a spider-topped scepter and her flowing robes show the power she has amassed, while her hardened physique and the tattered webs around her hint at what she went through to achieve such power.

What he wants, Stanko said, is for people to see the sto­ries they love in the art he creates. “That’s what I love to do. I love to tell stories.”