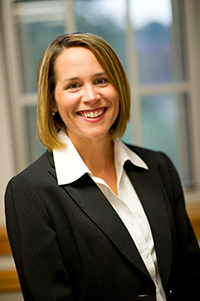 “We’re now just scratching the surface of how we can use the virtual world (for training and commerce),” Eschenbrenner said. She and her research colleagues at the University of Nebraska-Lincoln are studying the potential benefits of systems featuring avatars.

Avatars are graphical personas of humans placed in a virtual world environment. In 2D, the avatar can be a simple icon; in 3D, a fully representational human. And the size and complexity of the computer-based simulated environments are only limited by the creator’s imagination. Some environments are as small as a room, such as a science lab, while others are re-creations of entire real-life cities.

Virtual worlds, commonly thought of in terms of gaming, are becoming more “real” with real-life applications. As noted in an article by Victor Keegan in The Guardian, “…Regular us­ers know that some virtual worlds are more ‘real,’ and certainly more efficient, than real life.

“An increasing number of companies such as IBM, for in­stance, hold meetings in virtual worlds, because they can gather together executives from around the world at one place without increasing their carbon footprint. And PowerPoint presenta­tions are far better. You can move your online camera closer, so you can actually read the text on the (virtual) screen, which you often can’t at the back of a (real) auditorium.”

The virtual world research that Eschenbrenner has done with Fiona Nah, who was her doctoral dissertation adviser at UNL, and fellow Ph.D. student David DeWester, has been pre­sented at national and international conferences, and has earned recognition in prestigious publications for information manage­ment specialists. 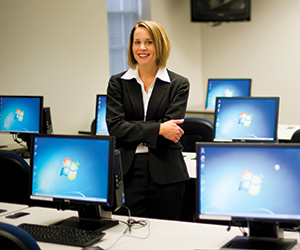 Their article on “Enhancing Brand Equity Through Flow and Telepresence: A Comparison of 2D and 3D Virtual Worlds” was published in 2011 in MIS (Management Information Systems) Quarterly, which has been rated as one of the top-ranked informa­tion systems journals.

According to the article, “The results suggest that although the 3D virtual world environment has the potential to increase brand equity by offering an immersive and enjoyable virtual product experience, the rich environment can also be a distrac­tion…developers of virtual world branding sites need to take into account limitations in the information processing capacity and attention span of users when designing their sites in order to avoid cognitive overload, which can lead to users being distract­ed from branding information.”

Their research was also featured in 2010 in the Proceedings of the International Conference on Information Systems. Eschen­brenner describes the conference as “one of the premier” confer­ences in her specialty.

In addition to publishing her research, Eschenbrenner has made numerous conference presentations, including the New Ventures and Leadership in Virtual Worlds Workshop in Austin, Texas, in 2010; the Big 12 Plus MIS Research Symposia at UNL and the University of Kansas in 2009 and 2007, respectively; the 2007 Human-Computer Interaction Research in MIS in Montreal, Canada, at which her paper with Nah received a best paper nomi­nation; and the Americas Conferences on Information Systems in San Francisco in 2009.

She’s also had work published in other jour­nals, book chapters and conference publications: workshops on HCI Research in MIS in Shanghai, China, in 2011 and St. Louis in 2010; the Journal of Database Management; Information Science Publish­ing; Journal of Virtual Worlds Research; International Journal of Mobile Learning and Organisation; and the International Conference on Human-Comput­er Interaction in Beijing in 2007.

Eschenbrenner brings to her research the real-world experience of an earlier private sector career with one of the nation’s top accounting firms, Deloitte & Touche, and with Gateway Inc., during the Fortune 500 company’s 1997-2001 expansive growth period. She joined Deloitte & Touche LLP in Lincoln immediately after earning her bachelor’s degree from UNK. At Deloitte & Touche, one of the “Big Four” accounting firms, many of her clients were banks for which audits required specific procedures and controls to determine if the numbers were right, and if the clients were meeting regulatory obligations.

Her experiences with those firms taught her that for account­ing systems to be effective, they require constant improvements to meet specific business needs and to keep up with new tech­nologies. She also saw good systems fail when employees did not follow procedures.

The result of a procedure failure is one of the real-world lessons she shares with her accounting students—when some­thing is done incorrectly in one department within a company, it affects the entire system.

“You just never know what you will find until you get in there,” Eschenbrenner said. “A lot of it is experience. I tell students that when you do auditing, it’s just a different way of thinking … You have to put that critical thinking skills hat on.”

In 1997, while at Deloitte & Touche, she was approached by a “head hunter” firm hired to recruit talent for Gateway, an international company with offices in locations such as Japan, Malaysia, Australia and Ireland.

“They were growing really fast at that time, a Fortune 500 company. They needed a lot of help,” Eschenbrenner said, including help willing to work a lot of late nights on the many start-up projects.

Gateway was competing with Dell for computer and laptop customers, a competition that generated constant change.

“Some people don’t like that challenge and intensity,” Eschenbrenner said. “I lived for that.”

In her first role as a Gateway financial analyst, she focused on corporate financial reports and analysis. When she advanced to senior finance manager for Gateway Country Stores, which grew from 30 to more than 300 stores in just 18 months, Eschenbrenner worked on information system upgrades and implementations across the divisions.

The accounting systems she was designing focused on the need for real-time data from all departments—marketing, sales, shipping, inventory and manufacturing. She said that real-time data is important not only for day-to-day business, but also because the data collected is used to make business decisions.

It soon became clear to her that no one had “put their arms around information system competency.” Without that, Eschenbrenner said, companies may spend millions of dollars on accounting systems and not get the return on that investment, because not all employees are using it correctly.

Eschenbrenner still rolls her eyes when she recalls the many times in her Gateway years she heard someone say, “We tricked the system to get that done.”

“Oooh, don’t tell me that,” she said. “From an accounting standpoint, that means we have incomplete or inaccurate data.”

Following set procedures is essential to an entire accounting system, so it doesn’t matter whether the “trick” was using a wrong code, inputting data late or some other problem.

That, she says, is where her interest in human-computer system relationships was born.

When Gateway moved their headquarters from Sioux City to San Diego, Eschenbrenner chose to stay in the Midwest to raise her fam­ily. By then, she was a senior finance manager involved in business forecasts and budgeting margins at a time when the separate internation­al units were closed, and Gateway was operated more as one company.

After a year working with Kroy Building Products in York, she went on to earn MBA and Ph.D. degrees from UNL, while serving as a research and teaching assistant. She joined the UNK faculty in 2010.

“Teaching was always something I wanted to do, probably since high school. I thought, ‘maybe someday.’ Then I tried it while working on my master’s, and I loved it,” Eschenbrenner said. Her teaching earned her the UNL College of Business Administration Outstanding Research Assistant Award in 2008-2009, and in 2010, she received honorable mention for the UNL Outstanding Graduate Research Assistant Award.

“A lot of the research I do is tied into teaching,”  Eschenbrenner said, and a lot of what she learned in the private sector is integrated into her lesson plans.

She said making accounting systems work is “definitely a 360-degree issue” that involves an organization’s environment, functionality and the user. The topic is also the title of a book chapter she wrote with Nah and Keng Siau – “A 360-Degree Perspective of Education in 3-D Virtual Worlds.” The book, Principle Advancements in Database Management Technologies: New Applications and Frameworks, is one in a series of reference works.

Too often, she has found, employers do not start the training process by telling their employees why account­ing tasks are done in a certain way. So, Eschenbrenner tells her students why it is important that they learn an accounting system, and the value that can be derived, before they ever touch a keyboard in a computer lab in the UNK West Center Building.

She teaches students how to use SAP (Systems Ap­plications and Products) accounting software, which is an enterprise resource planning (ERP) system. SAP, which is challenging to learn, provides the basic foundation for understanding accounting systems. Eschenbrenner said she encourages students to explore the system on their own to help them understand the system and get over any fears they might have.

Without allowing such hands-on exploration, she said, it would be like telling students how to use a new cell phone and expect them to understand all the options without touching the phone.

For accounting systems, Eschenbrenner said one question is whether virtual world technology can help train employees. Would a system with an enhanced virtual world experience result in employees using it correctly, rather than trying to “trick the system”?

“The big push now is to be more mobile. Doing things on the fly. Pulling it up on your iPhone,” she said, so integrated solutions must be part of effective accounting systems.

“Virtual worlds are relatively new,” she said, but they are becoming more mainstream with a younger generation that is entertained by 3-D computer games, movies and virtual worlds. And with those looking for real-life profit in virtual-life worlds.

For example, in Business Week Rob Hof profiled virtual-life land baroness Anshe Chung, who is Ailin Graef in real life, as being the first person to become a real-life millionaire by doing business in a virtual world. Chung/Graef began with small scale purchases of virtual real estate. She subdivided and developed the virtual real estate with virtual landscaping and themed architec­tural builds, which she then rented and sold in a virtual world.

“Because there are actually people doing business in virtual worlds,” Eschenbrenner said, “there are now accounting questions such as how to depreciate a building in a virtual world.”

Eschenbrenner said she plans to continue her information system user competence research as a way to solve problems she recog­nized more than a decade ago when Gateway employees didn’t always follow their company’s accounting system procedures.

Maybe, she said, training using virtual world images can help employees better understand that how they input data affects all other departments. It’s just one of the questions her research may soon answer.