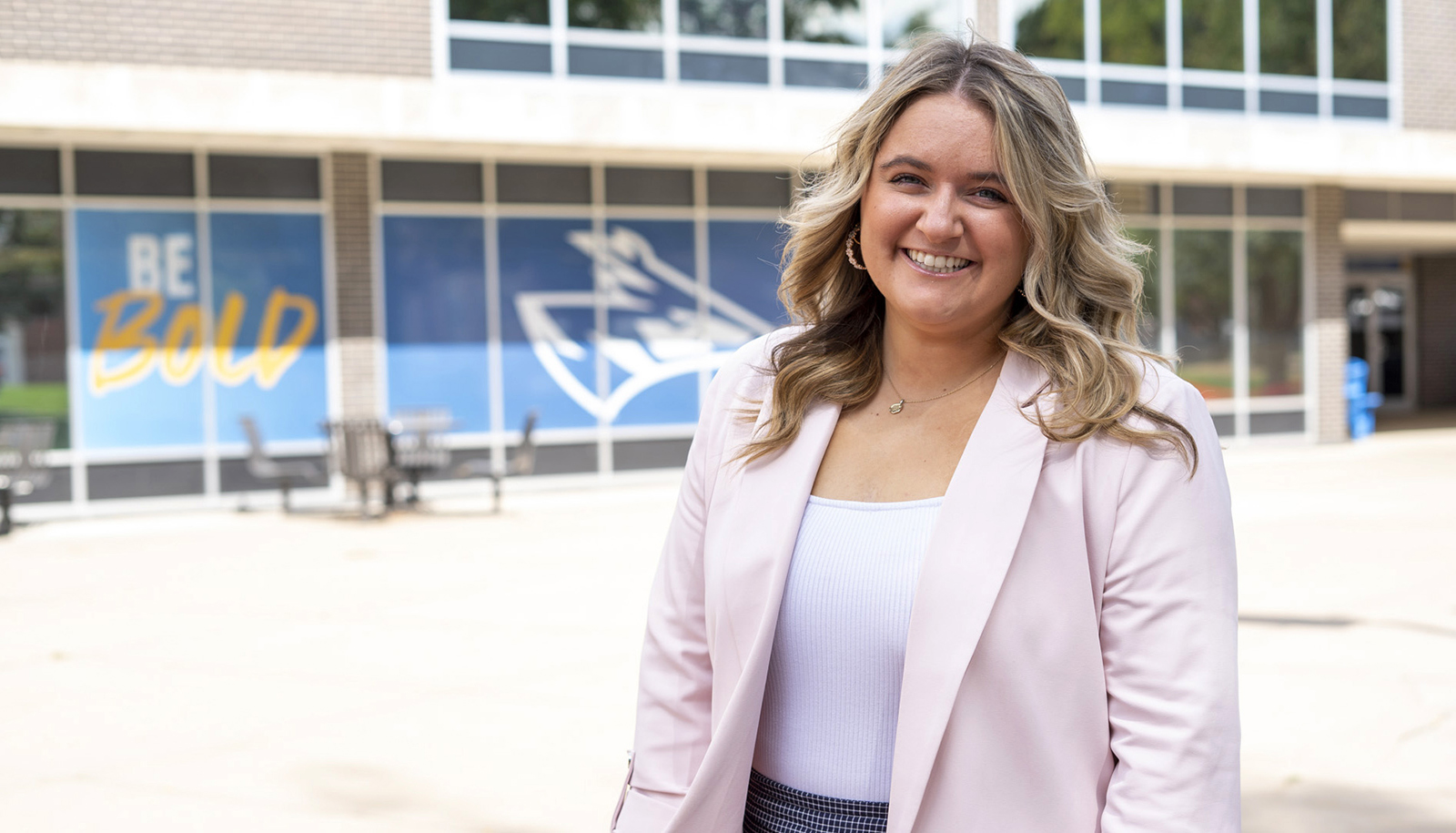 By ALEX HAMMEKE
The Antelope

KEARNEY – University of Nebraska at Kearney senior Tatum Vondra didn’t know exactly what she wanted to do after graduating, but she knew where she wanted to go.

A girls trip with her mom to New York City had her sights set on the Big Apple.

“I just fell in love with the city,” Vondra said. “I remember one moment very vividly watching a woman dressed very similar to me right now flag down a taxi and get in a cab. I looked at my mom and I was like, ‘I want to move here.’”

The business administration major from Milford has already flown out from the Cornhusker State to the Big Apple, soon to start an internship with Madison Square Garden as a process engineering student associate. Her position will consist of working with departments such as venue management, guest services and public relations to make sure efficiency is maximized and departments are hitting goals.

Vondra was able to pursue her big-city dreams on a whim through a project in her JMC 309: Intro to Public Relations course with Michelle Widger, a senior lecturer in the UNK Department of Communication.

Widger’s other projects in the class have garnered various opportunities, as well.

“One assignment within the class is to interview someone who has a position you want,” Widger said. “I had one student reach out to the national soccer league in Mexico and talk to the head of public relations. We had to sign a special letter saying we wouldn’t share the information with anyone else.”

That led Vondra to start looking at jobs in New York, where she stumbled on a live coordinator position through Madison Square Garden.

“They were looking for someone with a bachelor’s degree and at least two years’ experience,” Vondra said. “I remember telling my roommates, ‘If only I had graduated, if only I was a bit older, this is exactly what I would want to do.’”

It took some convincing from friends, but Vondra would end up applying for the position in a spur-of-the-moment decision at 2 a.m.

Still curious, she started combing through page after page of open positions, landing on the student associate application.

After a simple survey and sending her resume off, the waiting game started between an internship with the Grand Island Chamber of Commerce and a study abroad trip to Costa Rica.

The process was full of patience and checking emails throughout the summer. With the interview process ending in late June, Vondra was starting to come to terms that she did not get the internship. Disappointed at first, the blow was softened by the fact that it also meant she’d be able to spend her senior year in Kearney.

A response came on June 29.

“I got a notification that I got an interview,” Vondra said. “It was confusing because most anything I had read about the program said that the typical person would have four to five interviews and my email said, ‘Congratulations on your next and final interview.’”

The next day, Vondra interviewed with John Morello, vice president of process engineering, and found out in mid-July that she was accepted for the position.

Roughly 1,300 miles separate New York City and Kearney, but UNK and the lessons learned will stick with Vondra. This includes her experiences in student government, Circle K and the Alpha Phi sorority.

The people will stick with her, too.

“The never-ending support from everybody here,” Vondra said when reminiscing on what she will miss most about UNK. “Obviously people are sad that I won’t be here, but at the same time everyone’s so excited. Nobody has expressed anything to me aside from support and encouragement.”

This story first appeared in The Antelope student newspaper