KEARNEY – University of Nebraska at Kearney senior Grace McDonald has loved to tell stories for about as long as she can remember.

When she was 3 years old, she wanted to be an author and illustrator, so her mother Amy translated her gibberish and drawings into writing.

In eighth grade, McDonald branched out to video. She recruited her five younger siblings – Faith, Hope, Mercy, Thomas and Perry – to be reporters in homemade newscasts, which included a recording of them dressed as past Nebraska explorers, such as Lewis and Clark, and a Nebraska weather video.

“I created a whole intro where we’re turning our heads and smiling at the camera,” she said with a laugh.

At Centura High School, the Rockville native gravitated toward all things communication while participating in Future Business Leaders of America (FBLA). She was the chapter reporter and submitted her articles to the St. Paul Phonograph-Herald newspaper. She also competed in digital video production and proofreading events, went to the national competition in broadcast journalism and public speaking, and wrote a biweekly student column for the Grand Island Independent.

McDonald soon realized she wanted to use her communication skills to help people.

“I just had this sense of purpose that this is what I’m supposed to do, but how can I make communities better? Journalism was what I was centered on,” she said.

Now a multimedia and journalism double major at UNK, McDonald gets to tell stories to a wider audience. This summer, she interned at 10/11 NOW in Lincoln.

McDonald shot and edited video and wrote accompanying stories for the television station’s website and social media channels. Sometimes, she spoke as a reporter in packages that appeared online and during newscasts on the local CBS affiliate. As time went on, McDonald was allowed to pitch story ideas.

“I got to do more than I thought. I thought I would be getting coffee for people,” she said with a chuckle. “It ended up being exactly what I wanted it to be.”

McDonald covered an array of topics, from a press conference with Gov. Pete Ricketts and a Chief Standing Bear memorialization to how the city of Lincoln keeps plants alive at Sunken Gardens during the summer heat.

Her favorite story was about a union protest near the BNSF Railway offices in downtown Lincoln. The event happened on a Sunday, when most reporters are out of the office, so McDonald jumped at the opportunity to cover it.

She interviewed the employees about their call for better wages, benefits and work hours.

McDonald said her broad experiences in life and at UNK prepared her for the news intern role.

Her internships as a reporter at the Kearney Hub for two summers and winter breaks made her feel comfortable walking up to strangers for interviews.

The writing skills she developed at the Kearney newspaper and as a reporter and editor at the UNK student newspaper, The Antelope, gave her a leg up when producing stories to accompany her videos. While other reporters may have groaned about the extra responsibility, it was a relief for McDonald to have space to tell more of the narrative.

“That print experience helped me tell a thorough story and helped it flow better,” she said. “I don’t think I could have succeeded without it.”

McDonald’s early experiences creating videos and playing with her younger siblings made it easier for her to interview children, who often freeze during on-camera interviews. For example, she put a 7-year-old girl with leukemia at ease when she showed her the camera equipment and let her put on the headphones to listen to the audio. McDonald also asked the girl to show off her Legos during the interview. As she played, McDonald recorded conversations between the girl and her dad.

“You just need to be authentic, and I think little kids are the best judge of authenticity. I think they know when they’re being talked down to or when they’re feeling uncomfortable,” McDonald said. “They are my favorite interviews because they’re the best of us.”

The Communication Department at UNK has also provided endless opportunities for McDonald to develop her skills. In addition to her duties as editor-in-chief of The Antelope, she reported and anchored for “Antelope News,” a biweekly show covering campus events and other UNK happenings. She was involved with the campus radio station, KLPR 91.1 FM, and served as a counselor at UNK’s Digital Expressions Media Camp the last two summers.

“We don’t have as many hands as other universities, so I’ve been thrown into a lot of opportunities that I maybe wouldn’t have gotten at a larger college,” McDonald said.

With those experiences, she was able to do whatever was asked of her at the Lincoln TV station.

UNK’s close-knit learning environment has allowed McDonald to better connect with her professors, too. For instance, she reached out to department faculty in an online group chat and let them know when her stories would be featured on the evening news. Associate communication professor Jacob Rosdail often offered her tips after the newscasts.

“Grace is a very smart young woman. She takes criticism to heart and is always trying to improve on her work,” Rosdail said. 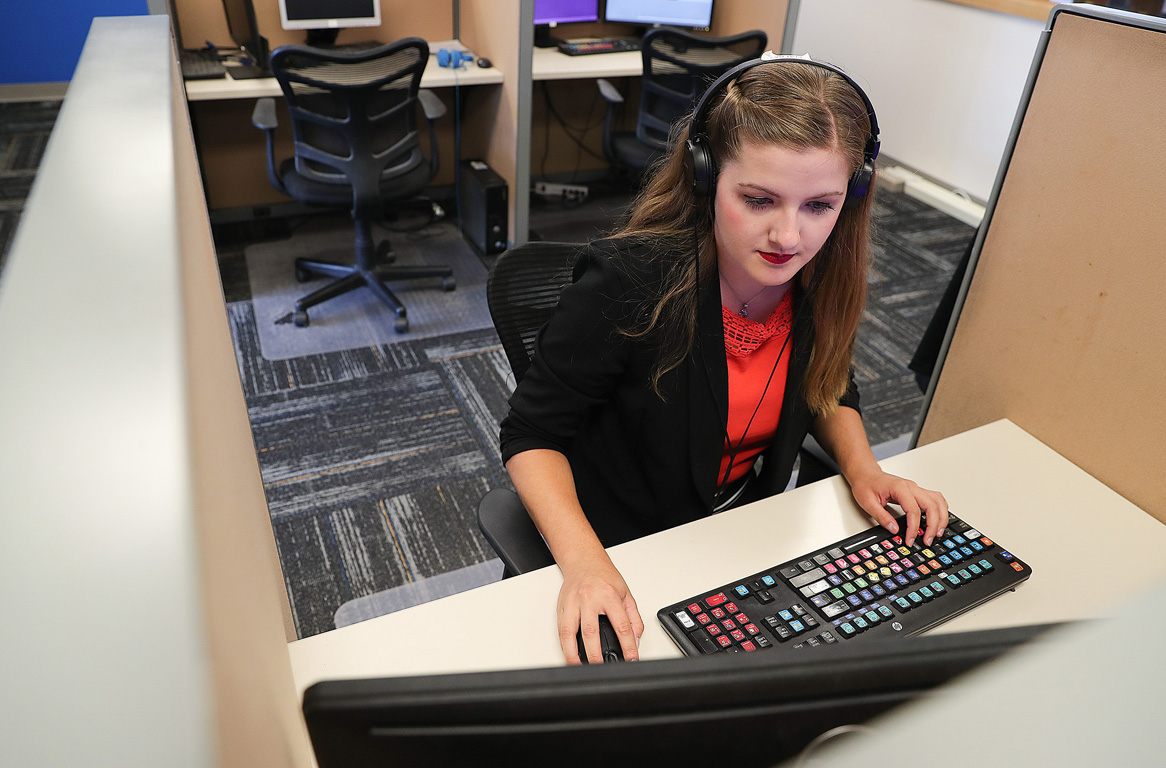 After completing her internship at 10/11 NOW earlier this month, McDonald learned lessons about herself.

She realized she has what it takes to be a professional journalist, something her professors were already saying.

“They’ve been telling me that all through my degree program, but now I’m out doing it in an unfamiliar landscape,” McDonald said.

McDonald also knows which communication path to pursue – broadcast journalism – after she graduates from UNK in the spring.

“I love the adrenaline rush of TV and the thought of producing something right now as it happens rather than waiting a week for a deadline,” she said.

The Midwest is where McDonald would like to stay, preferably in Nebraska.

“I think the Midwest needs journalists to advocate for it,” she said. “I want to tell the stories of farmers, small-town heroes and small business owners. Because, who else is going to?” 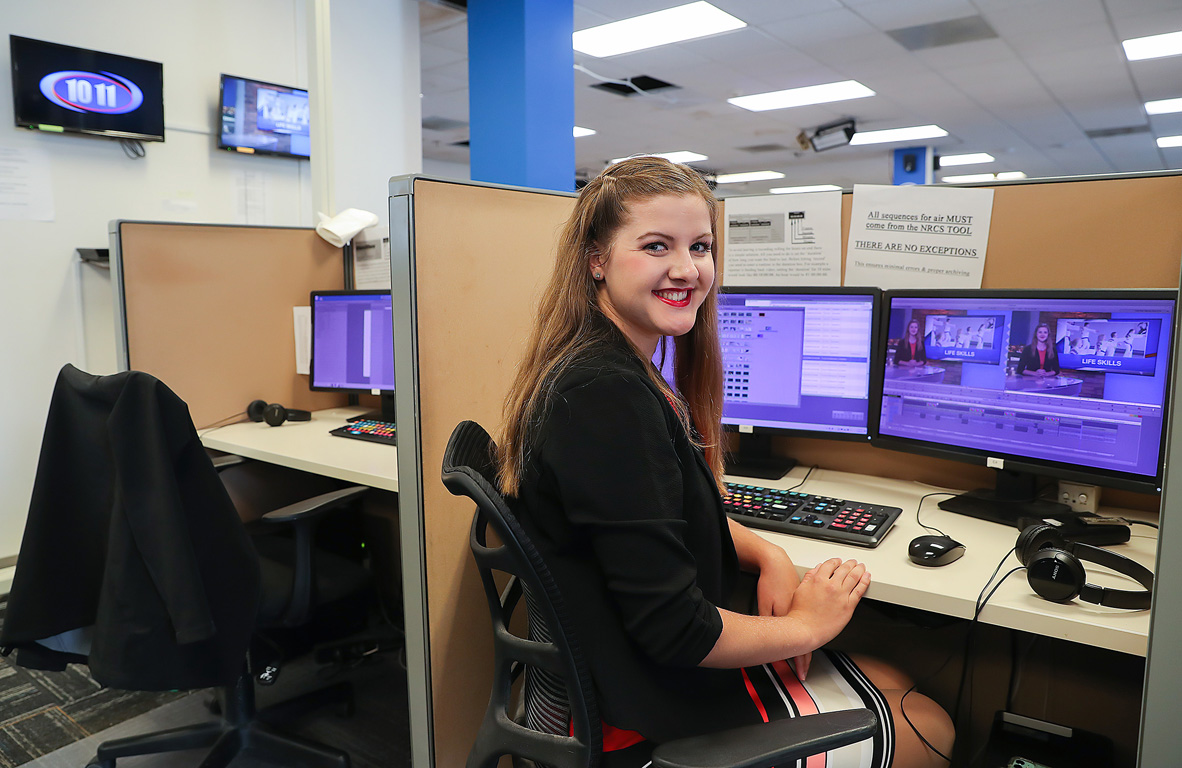 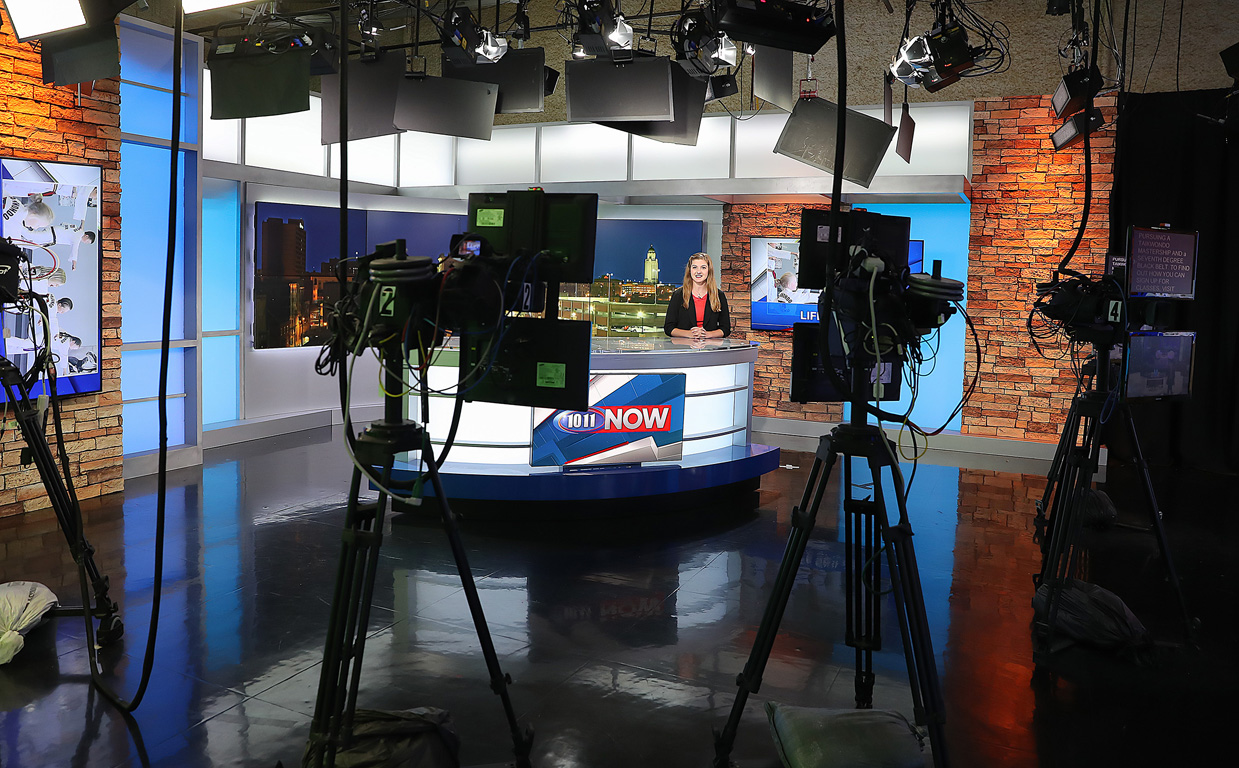