Unlike some buildings on the University of Nebraska at Kearney campus, the faculty and staff who work there aren’t focused on a specific academic area. They support everybody.

For someone who values higher education and lifelong learning, it was the perfect place to spend the final 34 years of her career.

“I really love this place,” said Wilke, who retired Thursday after 15 years as library dean. “It’s brought so many opportunities to me and my family.”

A Nebraska native, Wilke grew up on a small farm along the Middle Loup River near Rockville in Sherman County. She attended a one-room schoolhouse through sixth grade before graduating from Centura Public Schools.

Her parents didn’t have a lot of money, but Wilke and her three siblings were determined to attend college. She watched her mother struggle when their father got sick when she was in the eighth grade and realized she needed to gain the skills necessary to take care of herself and her future family.

“I did not want to end up like that,” Wilke said.

Initially undecided about her long-term plans, Wilke slowly gravitated toward libraries and the broad range of topics she could explore.

“I kind of latched onto that,” she said. “That was really interesting to me.”

Wilke earned a bachelor’s degree in sociology and master’s degree in education from Chadron State College and worked as a school media specialist in Superior for one semester, which was long enough to learn she’d probably prefer postsecondary education over K-12.

After marrying her husband Colin, a Columbus native, Wilke worked in the library at Doane College in Crete for five years. While her husband continued working in Crete, she moved eight hours away to pursue a master’s degree in library and information science at the University of Wisconsin-Madison. Wilke graduated from the University of Wisconsin in 1985 and spent the following three years at Wichita State University before another opportunity surfaced.

UNK, known then as Kearney State College, was looking for a reference librarian and Kearney Police Department also had an opening Colin was interested in.

“We did want to come back and be by family eventually. We just did it a little sooner than we thought we might,” Wilke said with a smile. 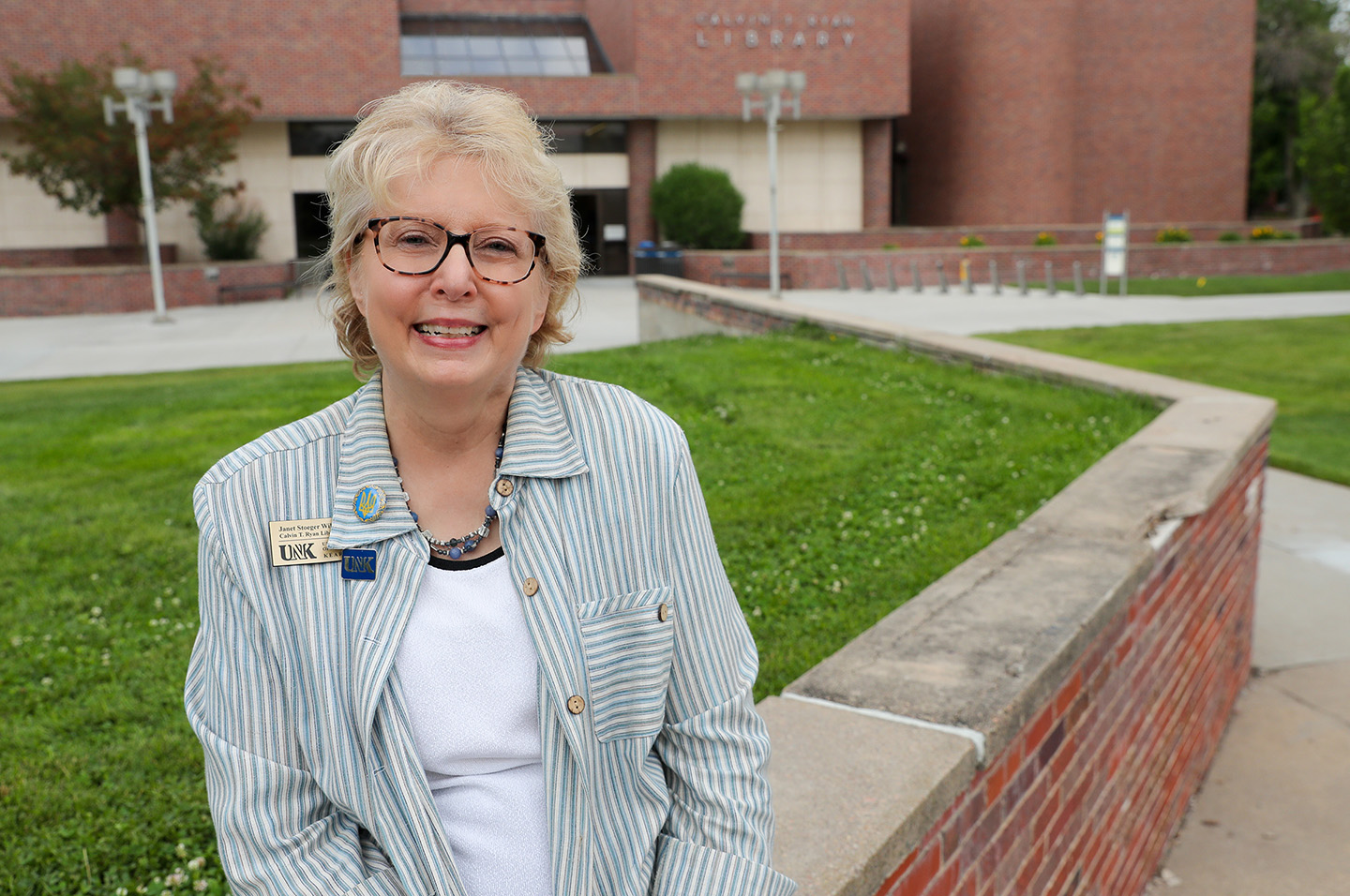 Professionally, the decision to remain in Kearney couldn’t have worked out any better.

“I didn’t come here expecting to end up being the dean,” Wilke said, but that’s exactly what happened.

Wilke rose through the ranks at Calvin T. Ryan Library, joining the staff there in 1988 and holding positions such as head of the curriculum/non-book department and director of the Regional Instructional Materials Review Center while it was in operation.

In spring 2003, when an illness forced then-Dean Mike Herbison to step down, Wilke was asked to lead the library on an interim basis. However, her children were 10 and 7 at the time and her mother was battling cancer, so Wilke was hesitant to say yes.

“Mike convinced me that I should do this,” she said. “Even though it’s going to be hard, he said you really need to do this.”

With support from staff and administration, Wilke served as interim dean for a year before returning to her role as curriculum librarian and later associate dean.

Two years later, she was called upon again following the resignation of Dean Larry Hardesty. This time, though, she never gave up the title. Wilke served as interim dean for nine months and was selected to oversee library operations on a permanent basis in March 2007.

Her guidance over the past 15 years has brought both stability and significant change to Calvin T. Ryan Library.

She led the development of the Learning Commons, working with the Division of Student Affairs to bring the Writing Center and Peer Tutoring into a partnership with the library to better support student academic success. More recently, the Office of Undergraduate Research and Creative Activity and Honors Program relocated to the library to facilitate collaboration.

Wilke also initiated the digital repository, an online resource where scholarly and creative work produced at UNK is stored and shared, and the university archives and special collections grew and gained prominence during her time as dean.

In 1985, the Nebraska Library Commission gave the UNK library its Nebraska Archive of Children’s Books, and the collection has continued to expand.

“We now have a really good research collection of juvenile literature here, probably the largest in the state of Nebraska,” said Wilke, noting that this “hidden resource” spans three centuries. Wilke and her family endowed a speaker series with the University of Nebraska Foundation to bring juvenile literature scholars to campus.

Additionally, she played a key part in the development of the Open Educational Resources initiative, which promotes the use of free and reduced-cost learning materials at UNK, and worked with library deans across the NU System to formalize the University of Nebraska Consortium of Libraries, which has significantly expanded access to resources for UNK students and faculty. She’s also been heavily involved in the planning of a multimillion-dollar renovation project that will modernize the 59-year-old campus library.

“I think we’ve made some real progress,” she said. “We’ve steadily moved forward as an academic library.”

None of these accomplishments would be possible without the 22 people who worked alongside her, she added.

“If you have the right staff, you can do about anything,” Wilke said. “They’re the key to a good library. We have a really dynamic group of people with the current expertise that we need here at UNK, and they all have student success as a top priority.”

Her husband Colin retired in 2019 after 37 years in law enforcement and their children, Lydia and Stuart, live in Denver and Kansas City. She wants to spend more time with them, preferably at the “vacation getaway” she and Colin are building along the Middle Loup River near Thedford.

“Having grown up on the river, I always wanted to get back,” she said.