KEARNEY – There was a time when Rick Squiers thought Sami Mauch’s volleyball career might be over.

Following her second knee surgery in less than two years, the University of Nebraska at Kearney head coach was prepared for the possibility that she may never return to the court.

“After going through what she’s gone through, I think a lot of people would have said, ‘That’s enough,’” said Squiers, who put together a 2021 roster that would allow the Lopers to compete in the rugged MIAA – with or without her.

Mauch could have called it quits. She could have avoided another grueling rehabilitation. Nobody would have blamed her.

But that’s not who she is.

“I never once thought about giving up,” Mauch said. “That never even went through my mind. I knew it wasn’t going to be easy, and most days were going to be harder than the last, but at the end of the day I knew I wanted to be part of the Loper volleyball program.” 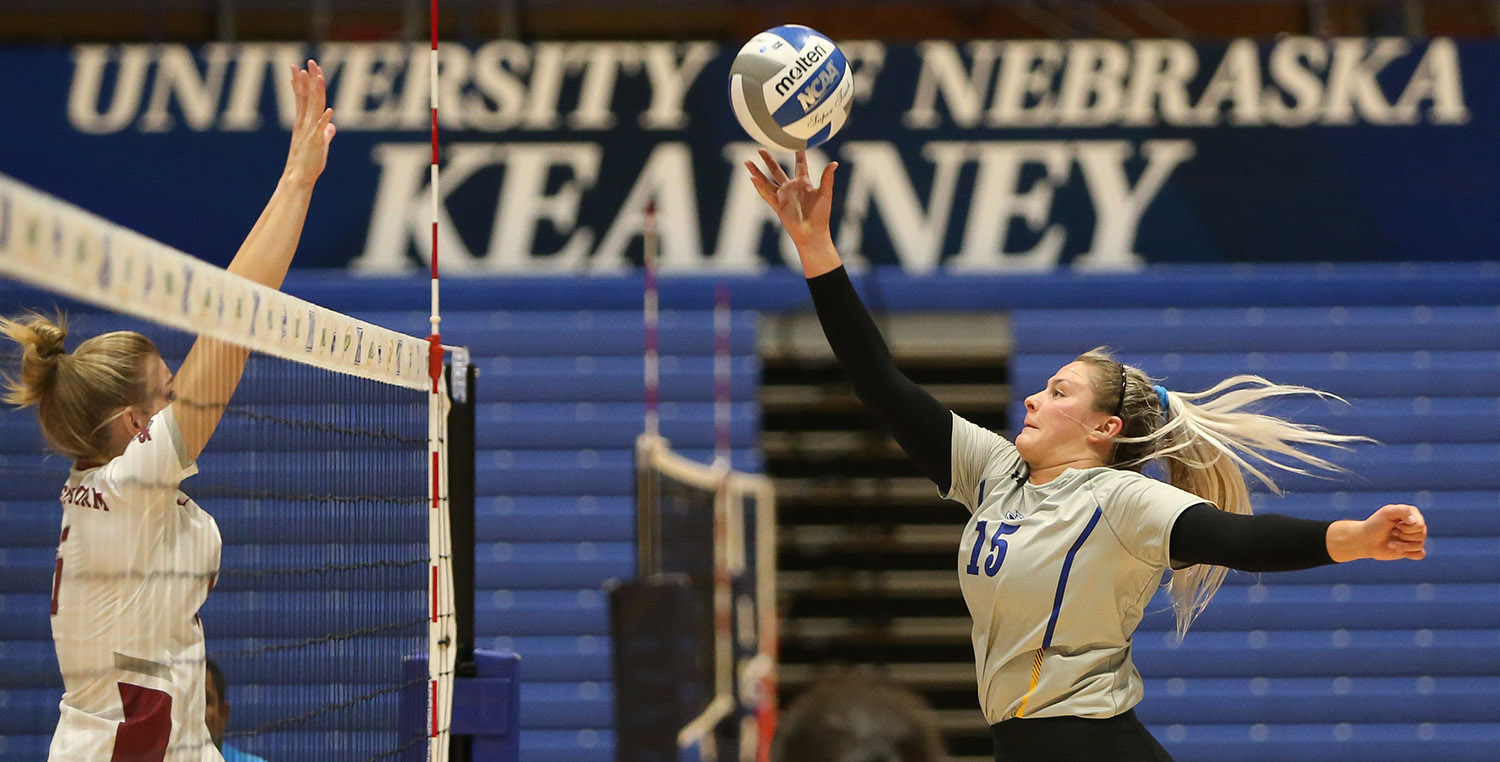 Mauch was a standout athlete at North Platte High School, where she played volleyball, basketball and soccer.

A two-time all-state selection in volleyball, she was the only underclassman starter in 2015, when the Bulldogs made a run to the Class A state championship match. Mauch recorded a school-record 54 aces that season, and she racked up 320 kills, 317 digs, 33 blocks and 30 aces as a senior in 2017.

The ultra-athletic outside hitter also played for the elite Nebraska Juniors club team. She and her father would make the roughly six-hour round trip from North Platte to Lincoln twice a week for practices.

That got the attention of numerous college coaches, including Squiers, who won a recruiting battle against some Division I programs.

The opportunity to play volleyball at UNK – where her parents Mike and Hollie attended college – was a dream come true for Mauch, who committed in September 2017.

“Being a part of this program is truly something special,” she said. “It honestly means everything to me.”

The following summer, Mauch wrapped up her high school career by participating in the Mid-Plains Area All-Star Game, an annual basketball showcase hosted by North Platte Community College. Mauch wanted to represent her hometown one final time, and her team put on a show during the 23-point victory.

However, it was far from a storybook ending.

Mauch was still on the floor with less than a minute remaining. “My sub was on the sideline about to come in and get me,” she recalls.

Although the outcome was no longer in doubt, Mauch always played hard until the final buzzer. She stole a pass and raced downcourt for a layup, but her left leg slid when she planted.

Less than two months before the start of fall camp, Mauch tore her ACL, MCL and both sides of her meniscus. She also suffered a significant bone contusion.

“I was just heartbroken,” she said. “I didn’t even know how to call coach and tell him. It was hard to even believe that it was reality.” 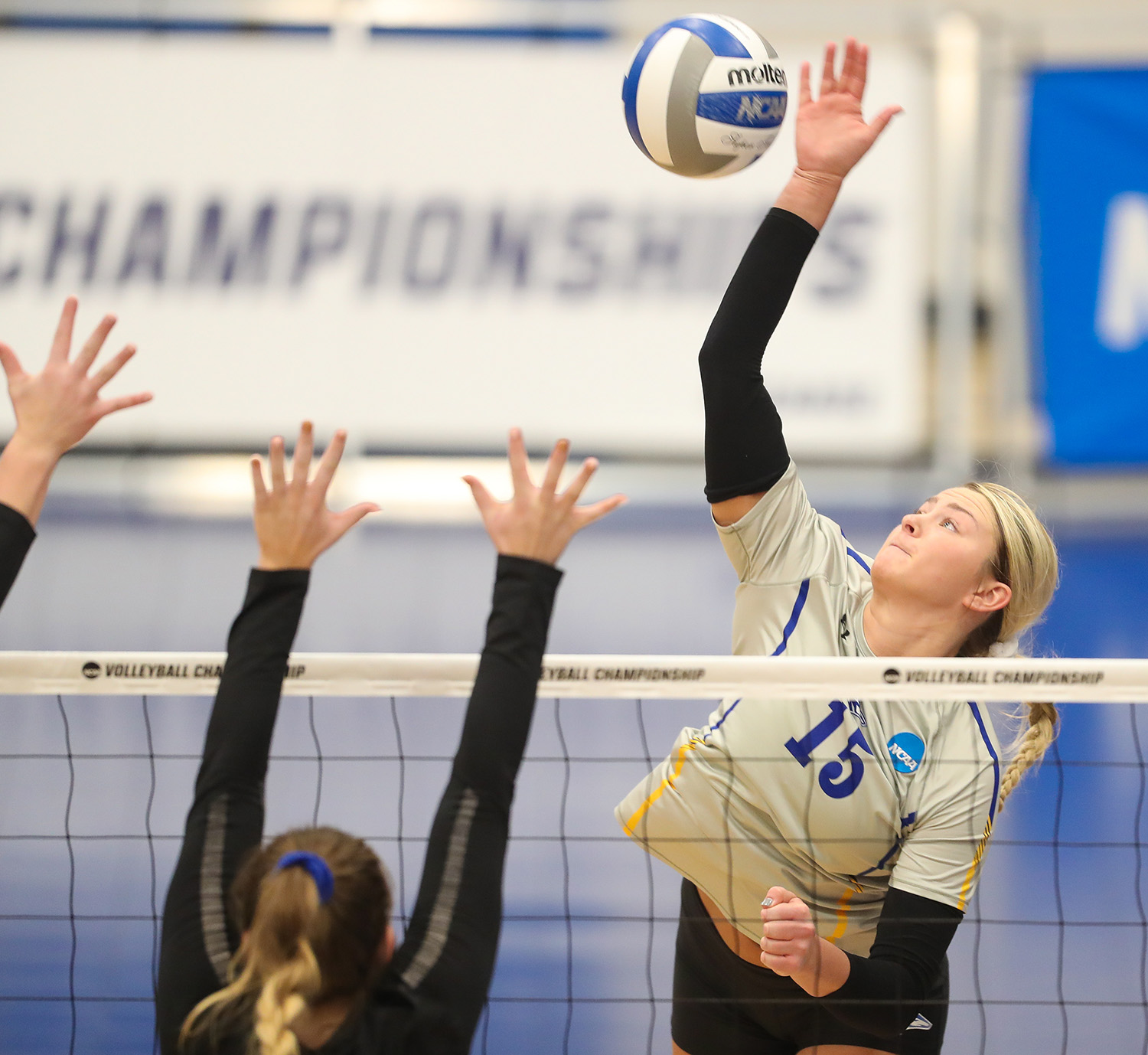 Because the damage was so severe, Mauch spent a full two months on crutches.

“I really lost all the strength I had worked for that entire summer to come in and contribute as a freshman,” she said.

Instead of joining her teammates on the court, Mauch attended regular sessions at New West Orthopaedic and Sports Rehabilitation before transitioning to the UNK athletic training room. She spent her entire freshman year recovering from the injury. 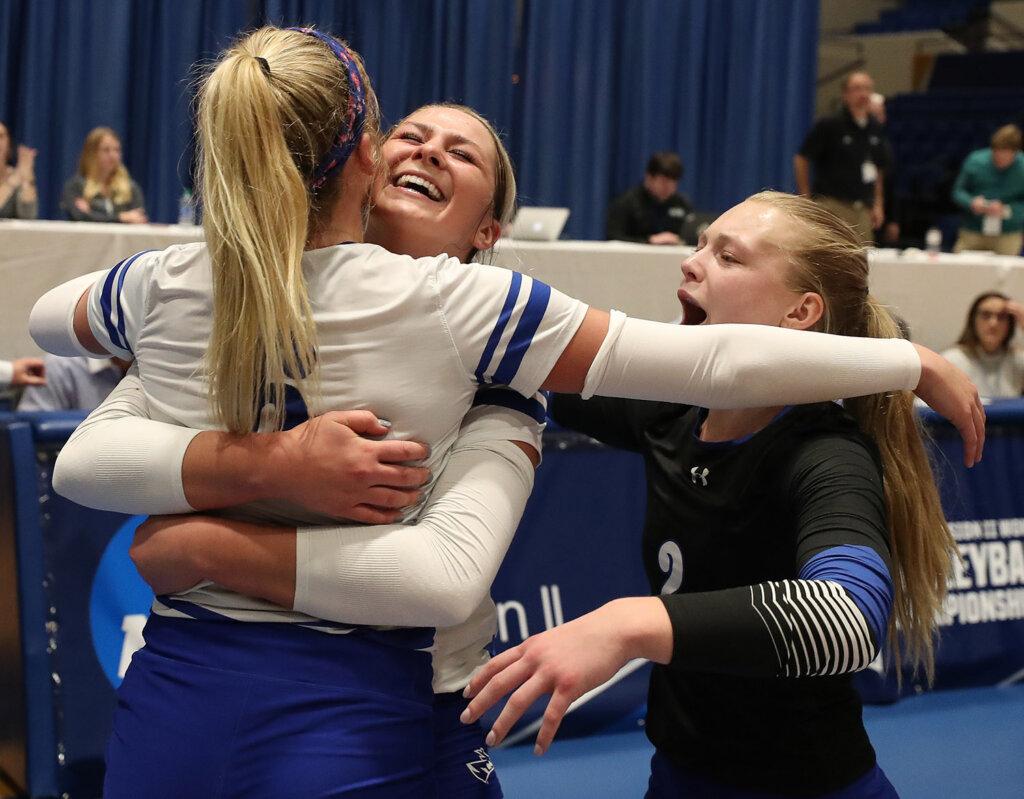 “I knew it was going to take a lot of work and focus, but I was ready for the challenge,” Mauch said. “I knew UNK is where I wanted to play volleyball, so I was going to do whatever I could to get myself on the floor.”

Mauch appeared in her first official match for the Lopers on Sept. 6, 2019, recording seven kills in a three-set victory over Adams State. She played in a total of 25 matches that season, including 11 starts, and was a key contributor as the Lopers put together a 38-1 campaign that ended in the NCAA Division II national championship match.

Mauch had 120 kills, including a season-best 15 against nationally ranked Washburn and 14 in the Central Regional final win over Concordia-St. Paul.

After the COVID-19 pandemic canceled the fall 2020 season, UNK was back in action this spring for an unofficial 19-match schedule.

Mauch didn’t make it past the first one. She went up for a spike, landed, and heard a pop.

“I knew right away,” she said.

An MRI the following Monday revealed the “floating” cartilage in her left knee. She underwent surgery a month later, then more rehab.

“She showed something by just refusing to let it slip away,” Squiers said. “Seeing what she’s been able to do this fall and knowing what she’s been through, no question I have another level of respect for her, because that could not have been easy.” 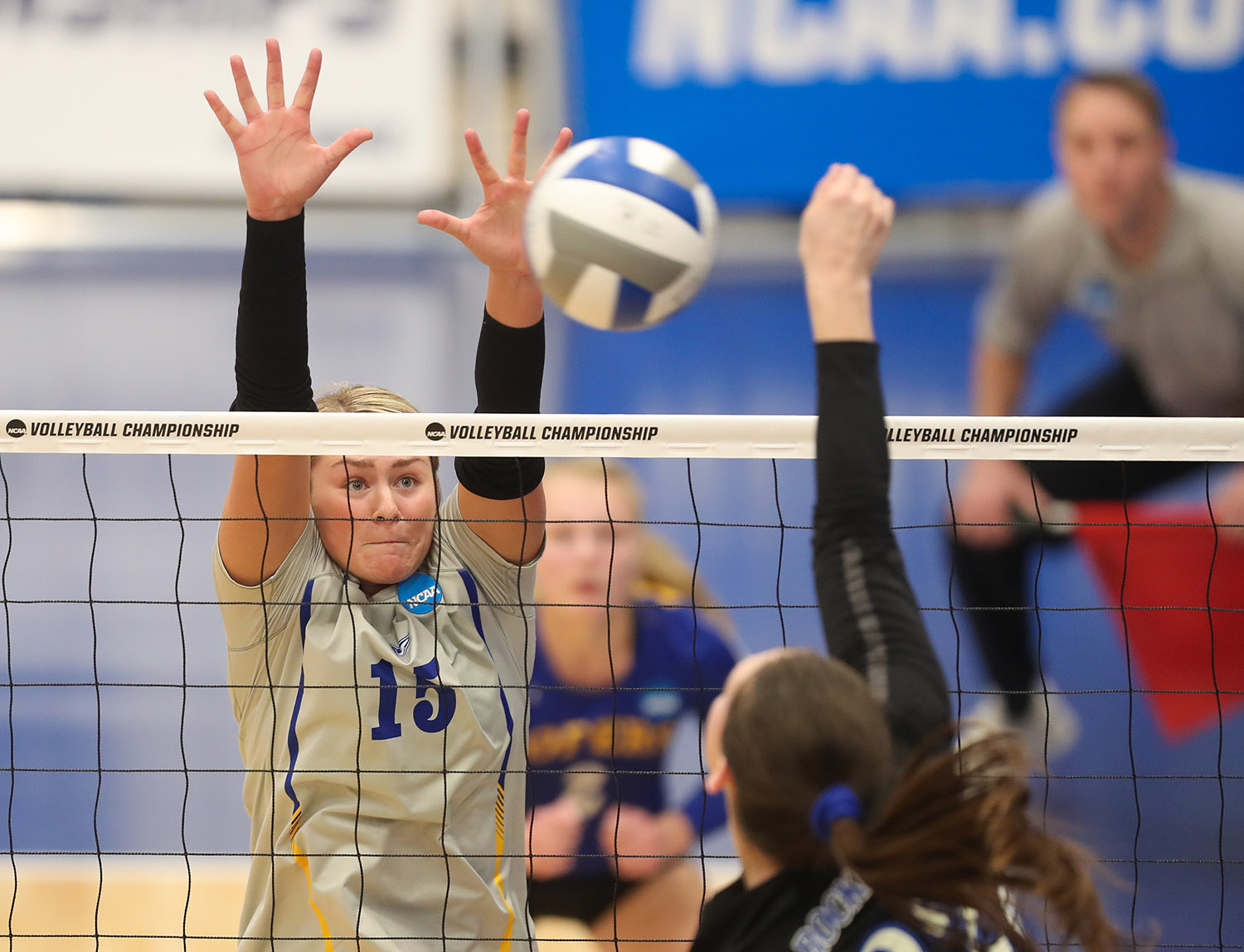 Mauch knows she’s not the same player she was before the injury, and that’s OK.

She’s just happy to be back on the court, playing the sport she loves.

“Coming into this season I wanted to contribute somewhere. I didn’t know exactly what that was going to look like,” she said.

Turns out, that meant playing a completely new position. Mauch moved from the left to the right side, a change that puts less pressure on her surgically repaired knee.

“This is the first time I’ve felt comfortable playing again,” said Mauch, who reached out to former Loper Mary Katherine Wolfe for advice on the transition to right-side hitter.

“She’s a different player, but maybe it’s a more complete player,” he said. “We’re seeing more of the well-rounded skill set she has this season. And I still think there’s some room for her to get better.”

The Lopers, 13-4 and ranked No. 14 in the AVCA Coaches Poll, have high expectations for this season, then Mauch has a decision to make. She has two years of eligibility remaining, but she graduates in December with a bachelor’s degree in exercise science and minors in health science and physical education.

Mauch plans to pursue a professional degree in physical therapy – an area she already knows way too much about.

“I’m just grateful to be able to put on that Loper jersey for another season,” she said. 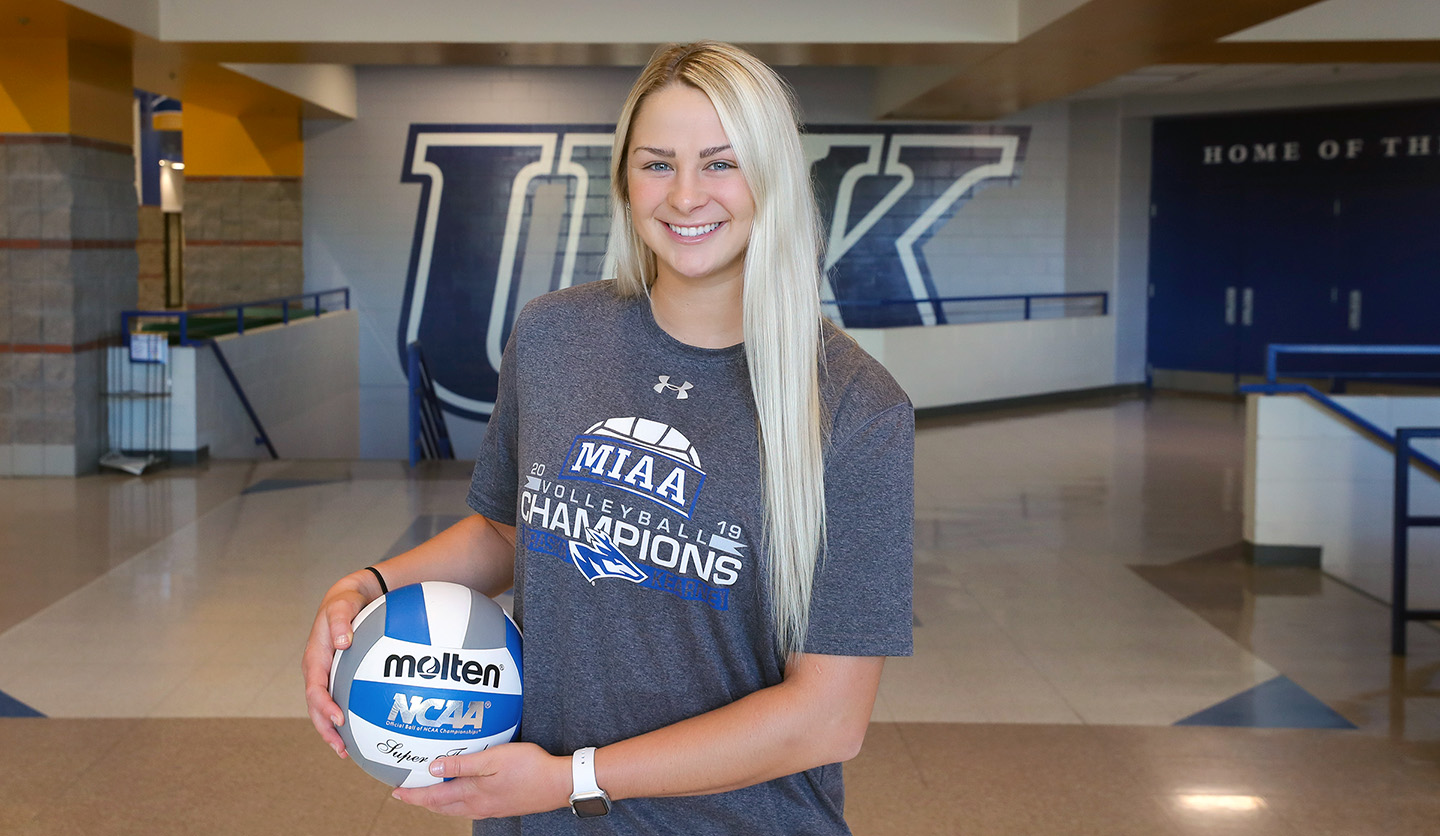 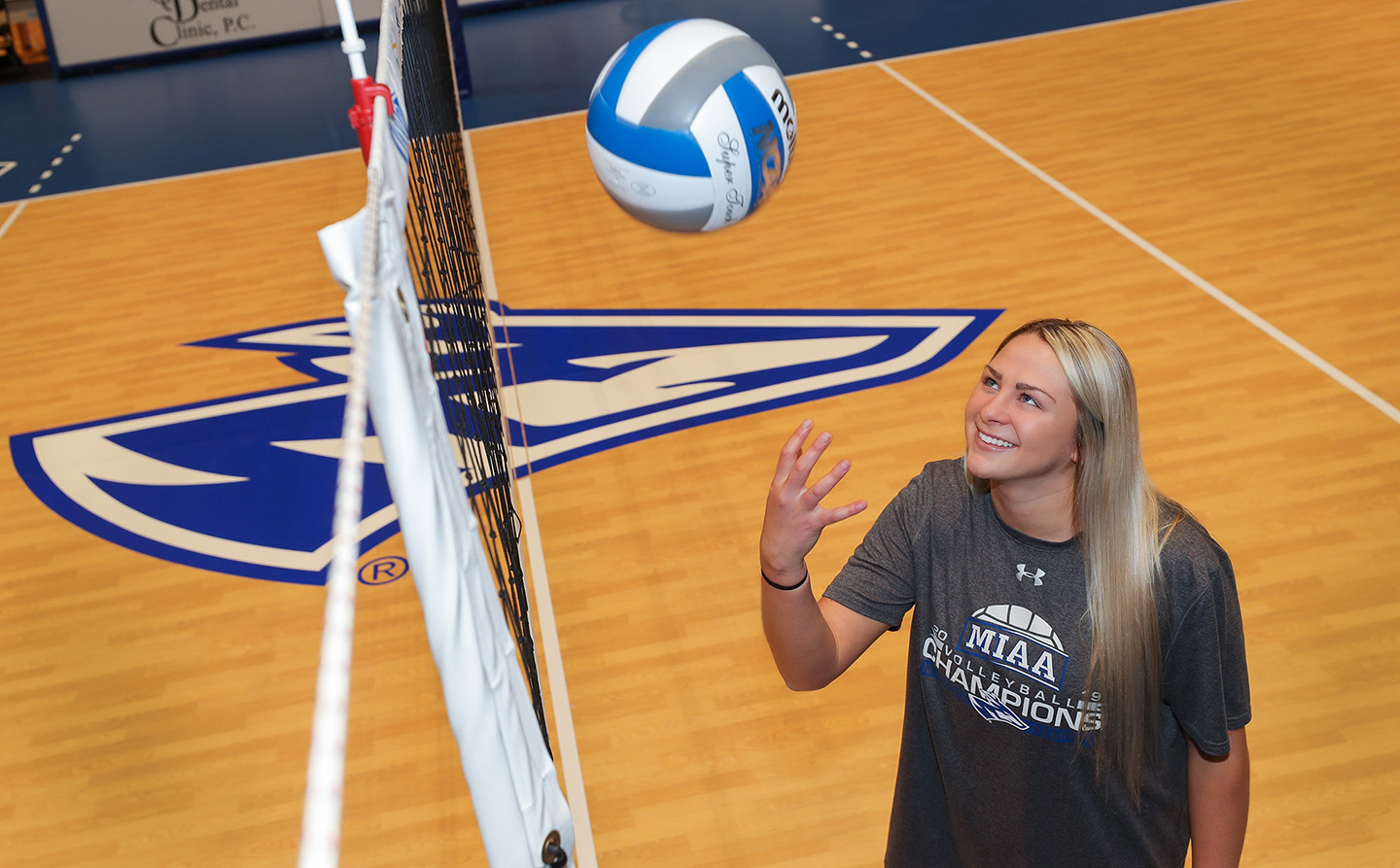