KEARNEY – The Pride of the Plains Marching Band is one of the most visible elements of the University of Nebraska at Kearney.

Band members represent the university at home football games and other campus and community events, as well as parades and competitions throughout the region.

They need to look as good as they sound.

“Our uniforms stand for unity. When we’re all on the field together and we look crisp and proper, it shows the crowd and everyone watching what we’re made of and what we can do,” said UNK junior Sadie Uhing, a trumpet player and section leader.

The music education major from Hartington definitely looked sharp on Saturday, when the Pride of the Plains debuted their new uniforms during the UNK Band Day Parade in downtown Kearney before performing at the football game against Washburn.

“It’s been a long time coming,” Uhing said. “We definitely needed it.”

Most band uniforms are expected to last about 10 to 12 years, according to Brian Alber, director of the Pride of the Plains. UNK’s hadn’t been replaced since 2003.

“It was difficult to keep them looking nice as they got older,” Alber said.

Alber and his team worked with Fruhauf Uniforms to design and manufacture the new threads and an updated parade banner. UNK alumnus Rex Barker, a representative for the Wichita, Kansas-based company, played a big part in the process and College of Arts and Sciences Dean Ryan Teten and Senior Vice Chancellor for Academic and Student Affairs Charlie Bicak stepped up to provide funding. The Department of Music paid for new color guard uniforms.

“Dr. Bicak and Dr. Teten have been incredible supporters,” Alber said. “It’s a pretty big investment for us to get 125 uniforms. To have the university support us financially, that shows what the marching band brings not only to athletics, but to the university and the Kearney community as a whole.”

The marching band uniforms feature a number of changes – all for the better, according to Uhing, who was selected to participate in the 2021 College Band Directors National Association Intercollegiate Marching Band. She sported the new UNK uniform in an online video that premiered during halftime of the College Football Playoff National Championship in January. 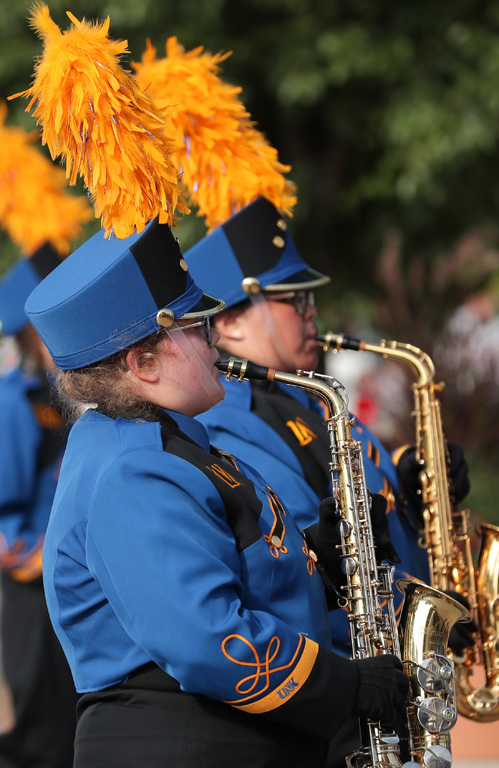 With bright blue and gold colors, the uniforms are flashier and they better represent UNK, said Uhing, who really likes the vibrant plumes.

“I think they’re going to look really nice on Foster Field,” she said.

That was intentional. When the final design was ready, Alber took the uniform to Foster Field to make sure the colors popped against the artificial turf.

Other major changes include the elimination of capes, which took significant time to maintain, and the addition of new UNK and Loper head logos. There’s also a different chest design.

Made from a hybrid wool blend, the uniforms are more flexible and breathable, making them more comfortable for students.

The Pride of the Plains Marching Band will show off their new look at the three remaining home football games, as well as the Oct. 2 Harvest of Harmony Parade and Field Exhibition in Grand Island, Oct. 9 UNK homecoming parade in downtown Kearney and Oct. 23 Nebraska State Bandmasters Association State Marching Contest at Kearney High School.

Uhing believes those events will serve as a valuable recruiting tool for UNK.

“All of those high schoolers are going to see our brand-new uniforms and they’re going to say, ‘Oh, that’s UNK Band. Oh my gosh, that’s so cool. They look great.’ It’s going to make other students want to be part of UNK Band, too,” she said. 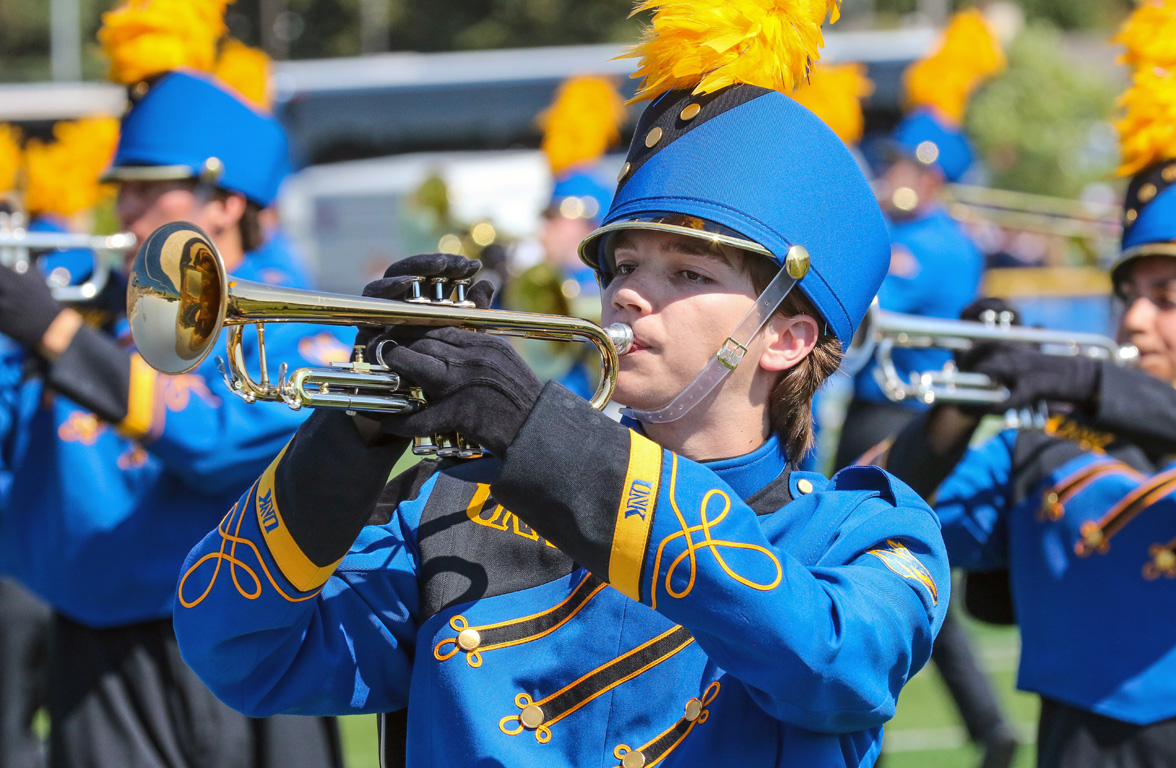 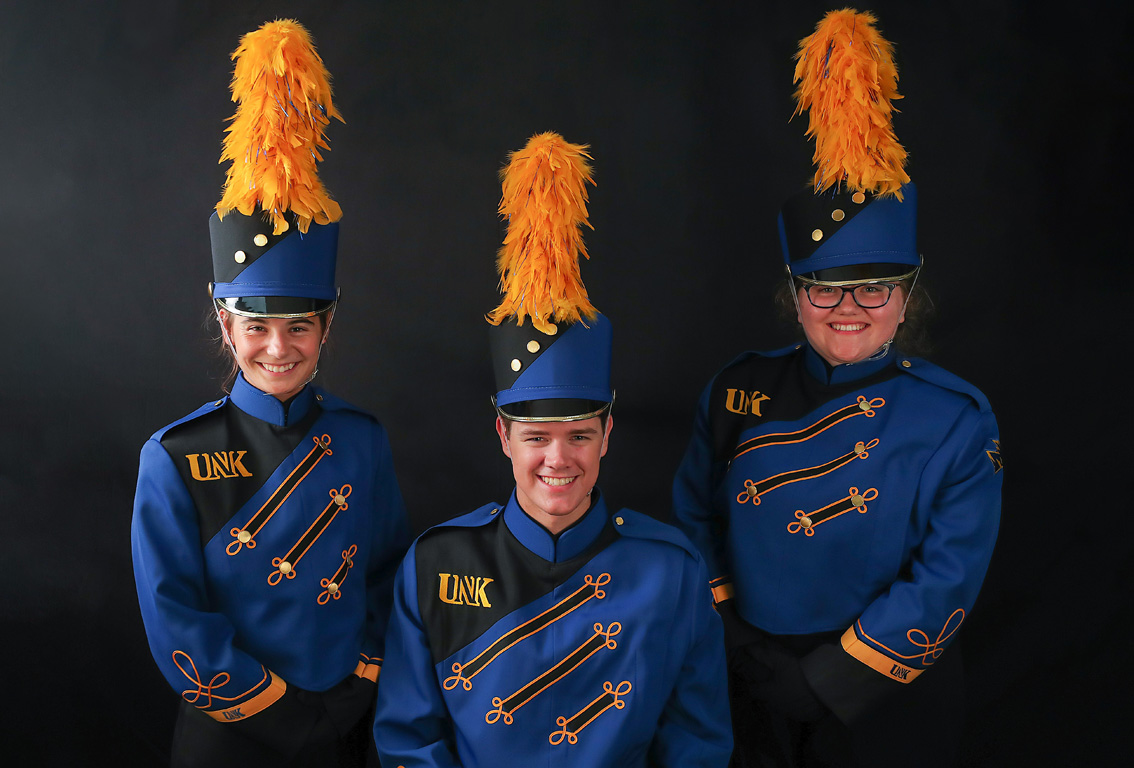 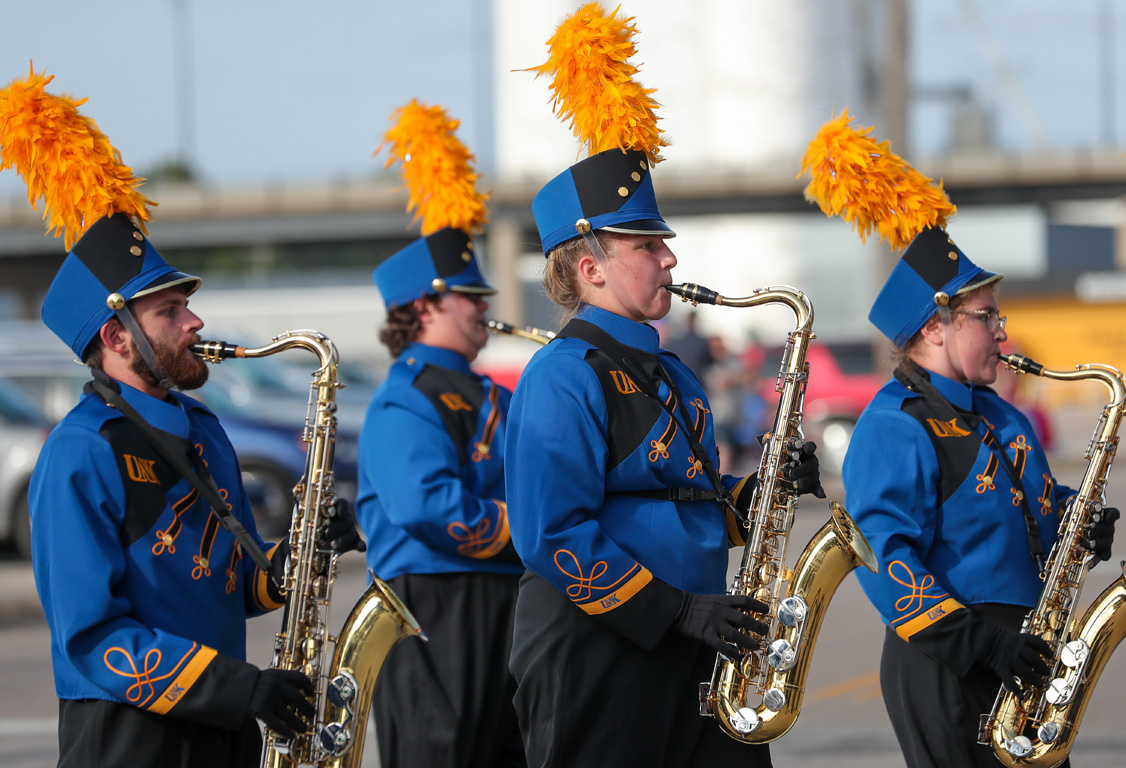