KEARNEY – Life is an adventure for Jake Jacobsen.

The University of Nebraska at Kearney communication instructor has run up mountains, over streams and through sequoia forests in the American West.

She’s competed in marathons in South Africa, Ireland and 45 of the 50 U.S. states, and is a proud member of the Lucky 13 Club, having finished the Lincoln Marathon 13 times.

She’s cycled South Dakota’s Black Hills and Tour de Nebraska, and repeatedly travels 187 miles of the Cowboy Trail between Norfolk and Valentine in northern Nebraska by foot and bicycle.

Along these paths, she has seen breathtaking vistas and wildlife and enjoyed the oft-overlooked beauty of the Nebraska landscape.

In Alaska, Jacobsen and other runners stopped in the middle of their marathon to watch eagles fly above, orcas swim in the bay and moose wander near the waterway.

On the Cowboy Trail, she listens to frogs, cicadas and meadowlarks and watches cattle in the adjacent pastureland because she is fascinated by their movement and how they take care of their calves. Jacobsen sometimes encounters rattlesnakes and deer on the trail but is unfazed. Rather, she is amazed by the creatures.

These adventures are a way for Jacobsen to continually gain a new perspective of the world and herself.

“We constantly have to be somewhere; be accountable to somebody,” she said. “But when you walk away, run away or cycle, and you’re out in nature and you realize we live in a wonderful, great, huge world, all those things we think are really stressful really aren’t.”

Jacobsen, 63, grew up living in and traveling to different states and countries.

When she was 6, her family moved from rural Nebraska to the Panama Canal Zone, where her father worked as a surgeon. She spent her summers vacationing in Hawaii, Canada, Colorado or Wyoming.

Jacobsen and her family moved back to Nebraska at the end of her sophomore year, and she graduated from Broken Bow High School at age 17. The next year, in 1976, she enrolled in an extra year of education at a private, all-girls school in Cape Town, South Africa, through Rotary International.

“My parents really did believe that I wasn’t mature enough to go to college. Thank God they gave me such a wonderful gift,” she said.

Though it was a dangerous time in the country’s history – with Nelson Mandela in prison and the country in the middle of apartheid – Jacobsen said her parents felt comfortable sending their daughter under the umbrella of Rotary.

In Cape Town, she met her best friend, whose parents were the only members of their family to survive the atrocities of Auschwitz during the Holocaust.

Jacobsen said that year in South Africa changed her life, and her upbringing set the stage for her love of travel.

“Sometimes people ask me, ‘Why do you go everywhere else? Why don’t you just stay here?’ To me, home is everywhere,” said Jacobsen, who’s lived in Kearney the past 30 years.

Jacobsen began cycling long distances when she was a young, single mother living in Alliance.

While getting a divorce from her two oldest children’s father, a friend asked her to go on a bike ride. They rode 20 miles that day.

The experience taught Jacobsen to slow down and find peace in nature.

She continued to cycle when she enrolled in classes at Chadron State College. As a single mother, she often didn’t have money to put gas in the tank, so she rode her bike 9 1/2 miles to Chadron State Park to work her internship.

Jacobsen also used cycling to de-stress and connect with God. She rode her bike to the state park and walked to the Black Hills Overlook when she couldn’t make it to Broken Bow for her grandmother’s funeral.

“When you just sit there and be still, you can say, ‘Do you hear the voice of God?’ Probably,” she said. “Maybe He’s been talking to you all along, but you weren’t quiet and still enough to listen.”

When Jacobsen moved to Kearney to pursue a master’s degree at UNK, she kept up with her long bike rides. She began kayaking the Kearney Canal, as well.

About five years later, she ran her first marathon in Lincoln. Since then, she has completed more than 100 full and half marathons, 5Ks, 10Ks, duathlons and triathlons. She also participates in multiple 50- to 100-miles-per-day cycling events each year.

As the daughter of a physician, Jacobsen was taught at a young age to take care of her body.

“It’s not about being athletic,” she said. “The fact is we all have this incredible machine and if you don’t move it, you won’t end up in a healthy space.”

Jacobsen moves her body every day. She cycles at least 40 miles per day, runs 3 to 6 miles a few times a week and kayaks every weekend during the warmer months. She also lifts weights three times a week and walks 3 miles every day with her youngest daughter Marti Cramer, who needs to stay active for her heart health.

Jacobsen used to do more. She ran 10 miles every day before undergoing knee surgery in 2017.

“Most people who know me will say I’m really high-end as far as activity and movement,” she said. Six weeks after her surgery, she ran 3 miles every other day and increased her cycling.

Jacobsen has endured cycling accidents, too. She suffered a collapsed lung and had to have a cornea transplant following a bad fall. Once, she was struck by a pickup.

“But you get back on and keep going,” she said. “Life isn’t linear. You don’t just wake up in the morning and everything is perfect. It’s how you deal with all those bad things.”

Jacobsen enjoys sharing her love of travel and the outdoors with her children and students.

She went to Ireland and England with her middle daughter Jeni Cramer and they visited Omaha Beach in France, where the Allied soldiers landed during World War II.

Jacobsen also taught in China and delivered solar-powered lights to India with the local Rotary group. She’s taken students on mission trips to Haiti and invites them to a yearly kayaking trip along the Kearney Canal.

“One of our objectives as teachers is to help students think and be creative. You don’t have to sit in a classroom with a laptop in front of you and your cellphone dinging next to you,” Jacobsen said. “If you go out and participate in your world, you will certainly learn.” 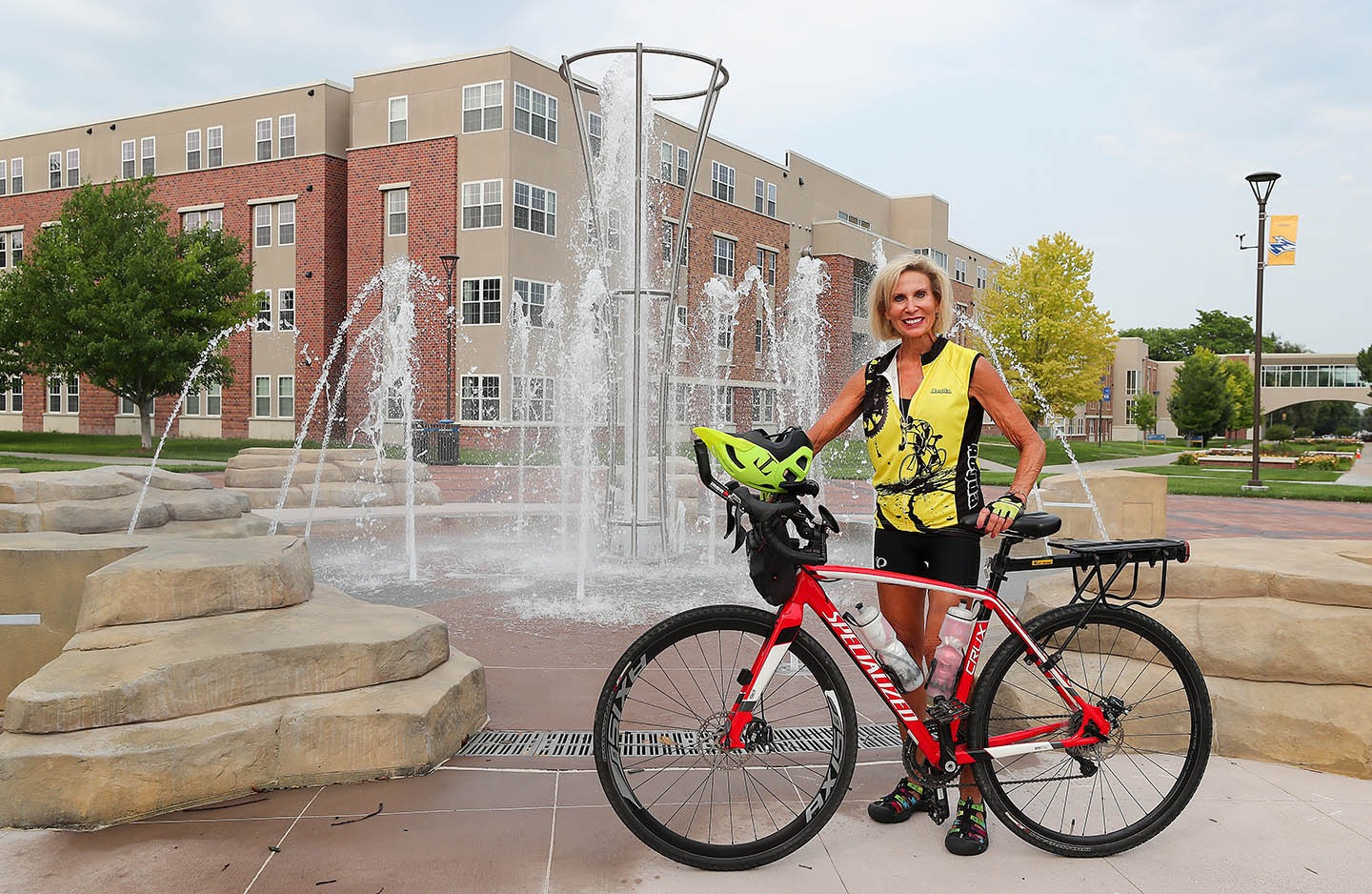