SCHUYLER – In Schuyler, Nebraska, population 6,300, half of the residents were born outside the United States.

Only 53% of adults ages 25 or older completed high school and just 9% went on to earn a bachelor’s degree.

The Colfax County community is a safe haven for people from across the world who left their home countries in search of a better life.

The daughter of Guatemalan immigrants, Cruz was born in New Jersey and raised in Schuyler, where her mother Isabel works at the Cargill beef-processing plant, the city’s largest employer.

Like so many others in town, Isabel never had the opportunity to pursue an education in Guatemala. She was forced to quit school in the third grade so she could help support her family.

“She tells me that story all the time,” Cruz said. “She cried and cried because all she wanted was to go to school.”

Cruz’s parents recognized the value of education, and they wanted their children to take advantage of an opportunity they didn’t get.

“My parents always pushed me to get good grades, because that’s all they could understand,” Cruz said. “They knew that getting good grades meant I was learning.”

And Cruz loved to learn.

A self-described “nerdy kid,” the highlight of her summers was shopping for back-to-school supplies. That meant it was almost time to return to the classroom.

She also used her fluency in both English and Spanish to help her parents understand the lessons she brought home each day.

“It was exciting for me to teach them what I was learning,” she said.

Cruz enjoyed school so much, she didn’t want to leave. And there was one career that would allow her to stay in the classroom.

“I realized I can share my love for learning with students,” Cruz said. “If I’m a teacher, I never have to say goodbye to school.”

During her senior year at Schuyler Central High School, Cruz joined a friend who was visiting the University of Nebraska at Kearney.

Cruz knew UNK had a strong teacher education program, but she’d never seen the campus located 2 1/2 hours from her hometown.

“UNK was something I hadn’t ever experienced. I think I had been on a college campus maybe once or twice because of high school activities,” Cruz said. “It was almost like a different world to me. It was exciting.”

Her excitement continued to grow as she discovered all the ways she could get involved at UNK. When she was offered a Bilingual Educators Scholarship through the Office of Multicultural Affairs, Cruz knew she wanted to be a Loper.

At age 17, the first-generation college student was ready to leave home and begin the next chapter in life.

“It was a big move, but we knew the scholarship was too good to pass up,” she said.

Cruz fit right in at UNK, where she was a member of the Alpha Omicron Pi sorority, Hispanic Student Association, Kearney Association for Bilingual Educators and several other organizations. The campus tour guide and dean’s list student was named a homecoming royalty finalist in 2017.

“I made a lot of connections with a lot of different people at UNK,” Cruz said. “If I could go back to being a college student solely for the purpose of reliving those years, I would. My years at UNK were honestly some of the best times.”

UNK also had a big impact on her teaching career, fueling her passion for education and solidifying her decision to follow this path.

“I appreciated the teacher education program at UNK because we were able to learn things in class, then apply this knowledge in an actual K-12 classroom,” she said.

As a freshman and sophomore, Cruz was part of The Language Project, a national program that offers Spanish language programs for kids. She taught students at four different elementary schools in Kearney.

She called her adviser, Patsy Bruner, a “huge influence” on her teaching style.

“She was very helpful while guiding me through everything and she really got to know me,” Cruz said of Bruner, a teacher education lecturer who retired in August 2018. “I felt like I wasn’t just a kid in college going through the steps. I was being prepared to impact others.”

Amy Nebesniak, an associate professor in UNK’s Department of Mathematics and Statistics, was another mentor.

Cruz was still student teaching when Michelle Burton, then the principal at Schuyler Middle School, called her out of the blue.

Burton knew all about Cruz, and she wanted the UNK student to interview for a teaching position at the middle school.

“I hadn’t even submitted an application,” said Cruz, who was aware of the opening but unsure about returning to Schuyler.

“I felt like I still had a lot of growing up to do before I went back home,” she said. 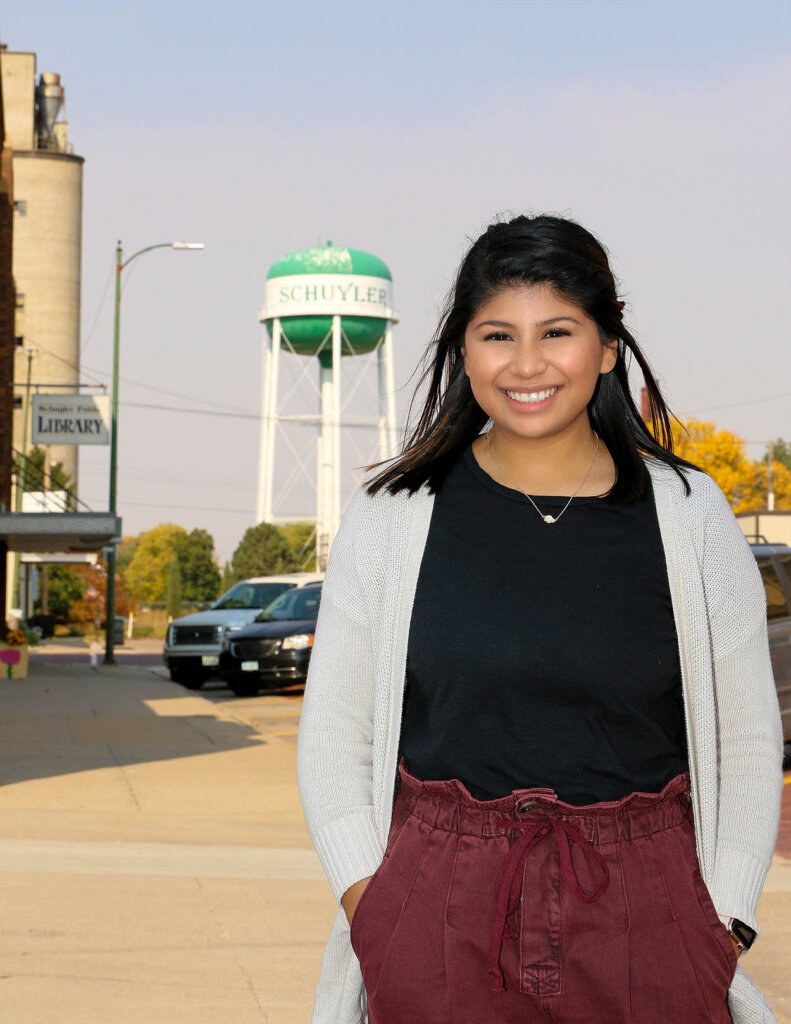 Cruz eventually agreed to the interview – her first for a teaching position – and was offered the job on the spot.

“It all happened really fast,” she said. “It was such a great interview, and I felt like this was something I couldn’t pass up.”

The 24-year-old made an immediate impact at Schuyler Middle School, where she’s taught seventh-grade math and Spanish since fall 2018.

Jesse Zavadil, a former assistant principal who took over for Burton in June, called Cruz a hard worker whose positive attitude and open-mindedness create an engaging classroom experience for students.

“It’s really easy to come into a school and just teach your students the same way it’s always been done, but Ms. Cruz has been willing to try more innovative teaching practices and get students talking about math,” Zavadil said. “She really has done a great job of finding new ways to reach students.”

Cruz has already become a leader at the school, according to Zavadil, who noted that her upbeat, approachable style is appreciated by her co-workers.

The Schuyler Middle School principal is so impressed by Cruz he nominated her for the Nebraska Association of Teachers of Mathematics (NATM) Rookie of the Year award, which she received in September.

Presented during the association’s annual conference, held virtually this year, the award honors Nebraska math teachers in their first three years of service who demonstrate passion and excellence in math education.

“When I saw NATM had an award for newcomer of the year, I instantly thought of Ms. Cruz,” Zavadil said.

Cruz, who started attending NATM conferences during college, had a different reaction.

“I was very shocked. It almost feels like imposter syndrome,” she said. “There are so many amazing teachers out there.”

Schuyler Middle School would like to congratulate Odalys Cruz on being selected as the Nebraska Association of Teachers of Mathematics' "Rookie Of The Year"! pic.twitter.com/DDTpL6ZdcS

That may be true, but few find the perfect fit like Cruz has at Schuyler Middle School, where 89% of the students are Hispanic or Latino.

Because she’s from Schuyler, Cruz is able to develop an instant connection with her students. These relationships are her favorite part of teaching.

“I really like to get to know the kids and form those relationships with them, then the content comes,” she said. “It’s so cool to see that growth and witness those aha moments.”

Cruz, who also coaches volleyball and is part of a community STEM committee, now realizes how important it is for her to be back in her hometown.

She wants to serve as a role model for students from similar backgrounds, inspiring them to continue their education and pursue their dream jobs.

“I think it’s so important for students to have people to look up to, and I hope to be that person in Schuyler,” said Cruz, whose younger sister Nayeli currently attends UNK.