KEARNEY – John Petzet knew he had big shoes to fill.

The University of Nebraska at Kearney’s new director of choral activities was replacing David Bauer, a highly respected vocal music instructor who held the position for 35 years before retiring last May.

Petzet, a Tulsa, Oklahoma, native with 18 years of experience at the postsecondary level, was up for the challenge. UNK’s vocal music program hasn’t missed a beat since he took over in August.

“There are a lot of opportunities here that weren’t available at my last position,” said Petzet, who served as director of choral activities and head of vocal music education at Louisiana Tech University from 2013-19.

For the first time in his career, Petzet is conducting four collegiate choirs – the Women’s Chorus, Men’s Choir, Collegium and Choraleers – a responsibility he calls both challenging and fun.

He credits his colleagues in the department of music, theatre and dance, as well as the hardworking students, for making the transition as smooth as possible.

“I’ve been well supported by everyone in the department,” Petzet said. “They’re just as helpful as can be.”

The assistant professor of music is also impressed with the local performance venues, both on campus and across the Kearney community.

In October, UNK hosted its annual choral symposium, an event that included the Choraleers and more than 200 high school singers from Kearney, Cozad and Lexington. The students worked with guest clinician Vijay Singh, a professor of music and choral/jazz director at Central Washington University, before performing a public concert at Kearney High School.

“I can’t say enough about Clayton Moyer,” Petzet said. “He is professional. He is excellent at what he does. When I go over there to work with the choir, I’m always very impressed.”

One of Petzet’s goals is to find more opportunities for UNK students to showcase their talent off campus and collaborate with other performers.

“We only sang two pieces, but it was a blast to do something completely different than what we typically do,” Petzet said.

In addition to performing with the Gospel Music Hall of Famer, UNK students were able to ask Patty questions about the music business and life as a full-time performer.

All four UNK choirs will be represented at the Merryman Performing Arts Center on April 28, when members perform two pieces with the Kearney Symphony Orchestra.

“The more opportunities and musical experiences I can give our students, the better prepared they’ll be,” Petzet said.

He’s visited a dozen Nebraska high schools over the past seven months as part of his plan to grow UNK’s vocal music program. On top of that, more than 120 students from six high schools attended UNK Choral Day in October and more than 750 performers from 101 high schools were on campus in January for UNK’s annual Honor Band and Choral Clinic.

“It’s all about recruiting,” Petzet said. “We’re not going to have singers if people don’t know we exist.”

Petzet wants to “let other universities know they have competition” by getting UNK’s name out there as much as possible. This includes auditioning for events with a statewide audience, such as the Nebraska Choral Directors Association and Nebraska Music Education Association annual conferences.

UNK’s Collegium and Choraleers have been selected to perform at the Nebraska Choral Directors Association and Nebraska Music Education Association state conferences numerous times throughout the years, most recently in 2015.

Eventually, Petzet would like to see the Lopers represented at the American Choral Directors Association regional conference.

“We have some growth that needs to occur,” he said. “It’s going to take a few years to get there, but I’m willing to put in the work.”

The 45-year-old lives in Kearney with his wife, Jennifer, and their three children, Zachary, Andrew and Catherine. 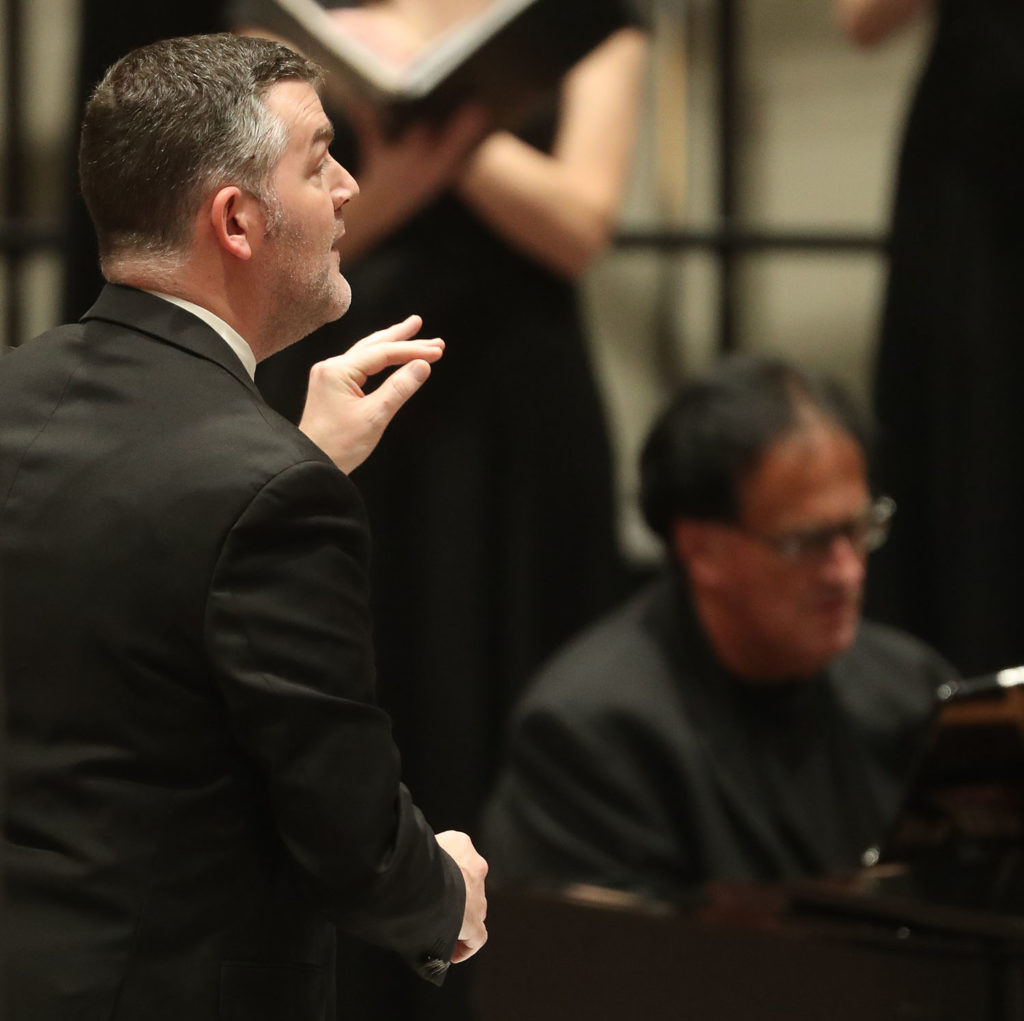