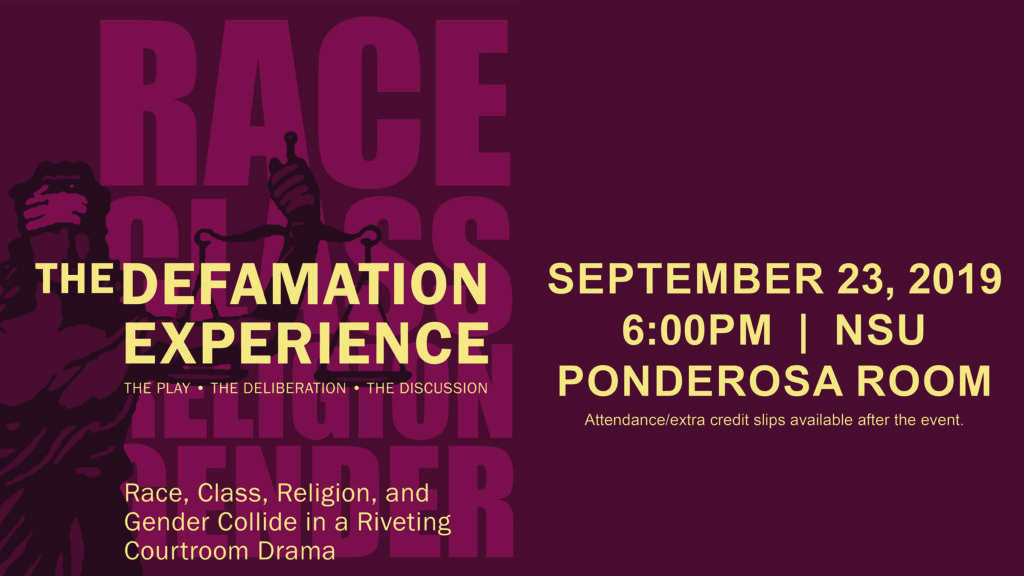 KEARNEY – Race, class, religion and gender collide in this riveting courtroom drama with a twist.

University of Nebraska at Kearney students, faculty and staff are invited to participate in “The Defamation Experience” 6 p.m. Monday (Sept. 23) in the Nebraskan Student Union Ponderosa Room.

The three-phase interactive program addresses diversity and inclusion issues in a unique and impactful way that challenges preconceived notions and encourages civil discourse.

Ms. Wade, an African-American business owner, is suing Mr. Golden, a Jewish real estate developer, for defamation after she’s accused of stealing his family heirloom. What follows is a 75-minute trial that “holds our prejudices and assumptions under a powerful lens, and does not let go except by way of an unsettling self-examination.”

Following the testimony, the judge tells audience members they’ll be the jury. That’s the twist. During deliberation, jurors discuss the case while deciding whether to vote for the plaintiff or defendant. Their vote decides the outcome of the trial.

Immediately following the trial, a facilitator steps forward and invites the audience to stay for a post-show discussion. This is an opportunity for honest and meaningful conversations about race, class, religion, gender and the law.

Since its premiere in November 2010, “The Defamation Experience” has been seen by thousands of people nationwide, with performances for universities, law schools, bar associations, high schools, civic and religious organizations and theaters across the country. It was created and written by award-winning playwright Todd Logan.

“Whether we like it or not, we still have major divides in this country. Most of us still go to bed at night in cities, communities and neighborhoods that are segregated by race, religion, ethnicity and/or class,” Logan said. “I wanted to write a play that encourages open, honest conversation that leads to greater understanding and empathy to combat today’s prevailing trends.”