“We are a very diverse campus, and there’s power in diversity. We need to utilize that power to improve our campus.”
– Nicole Kent, UNK Student Body President

KEARNEY – Nicole Kent and Katie Schultis have a lot to accomplish over the next year.

The University of Nebraska at Kearney’s new student body president and vice president are confident they can address every item on their campaign platform – from legislative advocacy and library renovations to parking policy and dining options.

“We think we can do all of them,” said Kent, a junior from Benkelman who serves as student body president and UNK’s student representative on the University of Nebraska Board of Regents.

They intend to meet this mission by reaching more UNK students.

“Our goal is to connect student government with the student body,” Kent said.

Many of the more than 6,000 students enrolled at UNK don’t understand student government’s role and how it can benefit them, she said.

Kent and Schultis, who took office March 26, plan to change that.

They want more students involved in every aspect of student government, whether it’s passing a policy to improve campus life or promoting UNK at the state Capitol.

Part of their outreach effort focuses on the creation of a new cabinet position that reflects the diversity of UNK’s student body.

The secretary of diversity and inclusion, a position that must be formally approved by the Student Senate, was proposed by Kent and Schultis to ensure students from minority populations have a say on campus issues.

Sophomore Adrian Gomez-Ramos, a first-generation college student from Lexington, was selected for the role.

“He’s very passionate about what he’ll be doing,” Schultis, a junior from Diller, said of Gomez-Ramos. “Adrian is very driven, and he brings a unique perspective to student government.”

The new cabinet member would serve as a liaison to the offices of International Education and Student Diversity and Inclusion while promoting student government and encouraging students from underrepresented backgrounds to seek elected positions.

“We are a very diverse campus, and there’s power in diversity,” Kent said. “We need to utilize that power to improve our campus.”

Kent and Schultis, both pre-medical students majoring in biology with a health sciences emphasis, believe UNK students also must rally together to show their support for the university system as Nebraska lawmakers discuss state funding for higher education.

A group of students, including Kent and Schultis, recently attended “I Love NU Advocacy Day” in Lincoln, where they met with state senators and encouraged them to back the university system during budget talks. Student government members sent the same message through letters to their representatives.

“We want people to know how much UNK means to us,” Schultis said. “Taking away funding means taking away some of the aspects that make it great.” 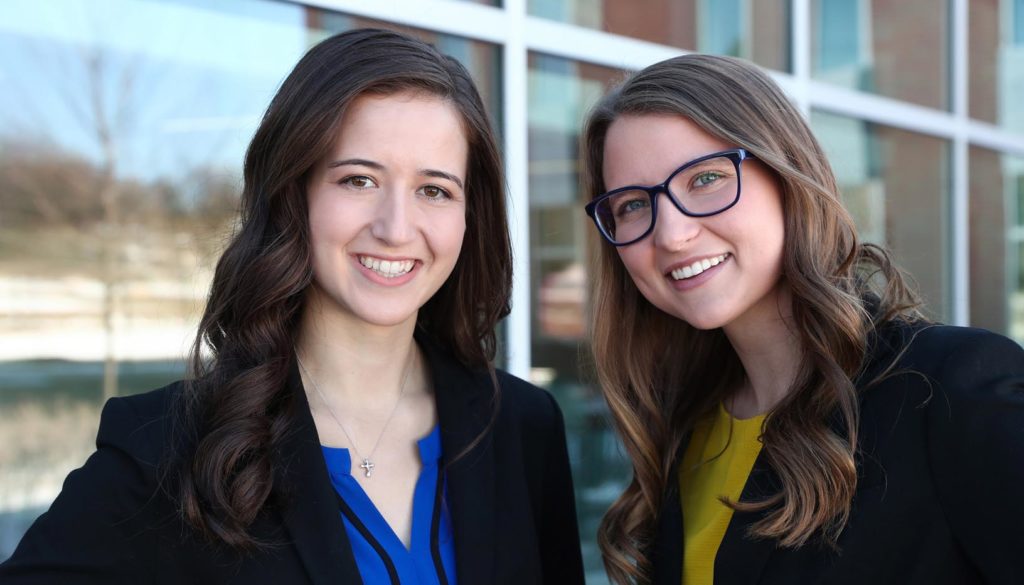 Here’s a look at other items on their agenda:

UNK is currently looking for a dining services provider to replace Chartwells, which is ending its contract May 20. When a new provider is in place, Kent and Schultis would like to see new meal plan options that offer more flexibility for students.

They also want a retail food option in the new STEM building, which is scheduled to open in spring 2020.

The student government leaders hope to establish a policy that allows students to reschedule final exams if they have more than two on the same day, similar to a policy already in place at the University of Nebraska-Lincoln.

“It’s something that we’ve both dealt with. It’s something that we know a lot of students have dealt with,” Kent said. “We have a friend who had four in a day – eight straight hours of final exams. And that’s crazy. That shouldn’t happen to a student, because you can’t perform at your best academically, regardless of how well you know the material.”

A separate proposal would require professors to add the “dead week” policy to their syllabi along with contact information for department chairs and college deans so students know how to report a violation.

Kent and Schultis plan to work with UNK Police and Parking to implement a “courtesy system” that allows drivers to receive a warning instead of a parking ticket once a year. The change would make campus “a little more welcoming for students and the community,” Kent said.

“It’s kind of gotten put on the back burner with all the other projects on campus right now,” Kent said.

Kent and Schultis want to reignite the discussion by conducting surveys and hosting forums so current students can provide input on the proposed library plans. They’d also like to add a coffee shop to the project.

They also want to ensure the hammocks requested by the previous student government leaders are installed on campus.

“This is something students voted for and students wanted, so we want to make sure it gets done,” Kent said.