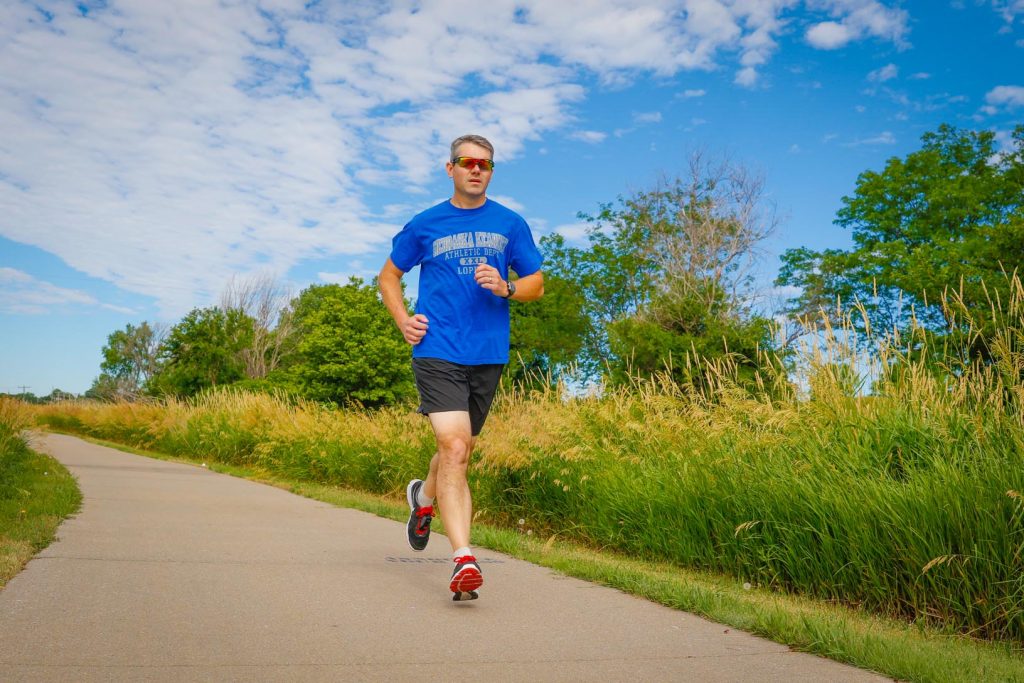 KEARNEY – In the 2000s, video games as a source of exercise and physical activity were taking over American basements and living rooms.

Kinect for Xbox. It was a new phenomenon, said Greg Brown, professor of Kinesiology and Sport Sciences at the University of Nebraska at Kearney. But after four or five years of research on the subject, Brown’s work stymied. “Two things happened. One, those video games were not as active as we had hoped,” said Brown.

“They were better than doing nothing, but it was about the same as walking. And as people got used to the video games, they were actually moving less. Then the market for active video games died off, too. So I had to move on from that research.”

That discovery forced Brown to answer the question of where does one go when a line of research comes to an end. “I just moved on to the next question,” Brown said. “What is something else I’m interested in, and what do I want to do?”

At a conference in Nashville in 2005, Brown met a few colleagues from South Africa who had been conducting research on strength training and aerobic exercise. Brown, along with Brandon Shaw and Ina Shaw of the University of Johannesburg, began collaborating on research and produced a number of publications related to how a combination of the two methods of exercise influence body composition, hunger and heart health.

It combined a number of interests for Brown, who runs approximately 30 to 40 miles a week and completes three hours of strength training each week as well. It also aimed to answer a variety of questions for individuals of all fitness levels.

“A lot of times when people exercise, you’ve got your weight lifters or you’ve got your runners and cardio people, but we all know you should do both,” Brown explained. “We’re trying to find out what the benefits of doing both compared to just one or the other are.”

Brown’s interest in this area of the exercise science stemmed from his research as a graduate student, which focused on strength training and nutritional supplements.

“We want to know how combining aerobic and resistance exercise influences health and appetite,” Brown said. “Our research shows that if you do both, you’re more likely to eat fewer calories than if you do just one or the other.

“Maybe it’s subconscious or maybe there are some hormones involved, and that’s what we want to research. Questions like, ‘Is there one that affects body composition more favorably?’ or ‘Is it all really just calories in and calories out?’ And then which type of exercise do people like.”

BRINGING RESEARCH TO THE CLASSROOM 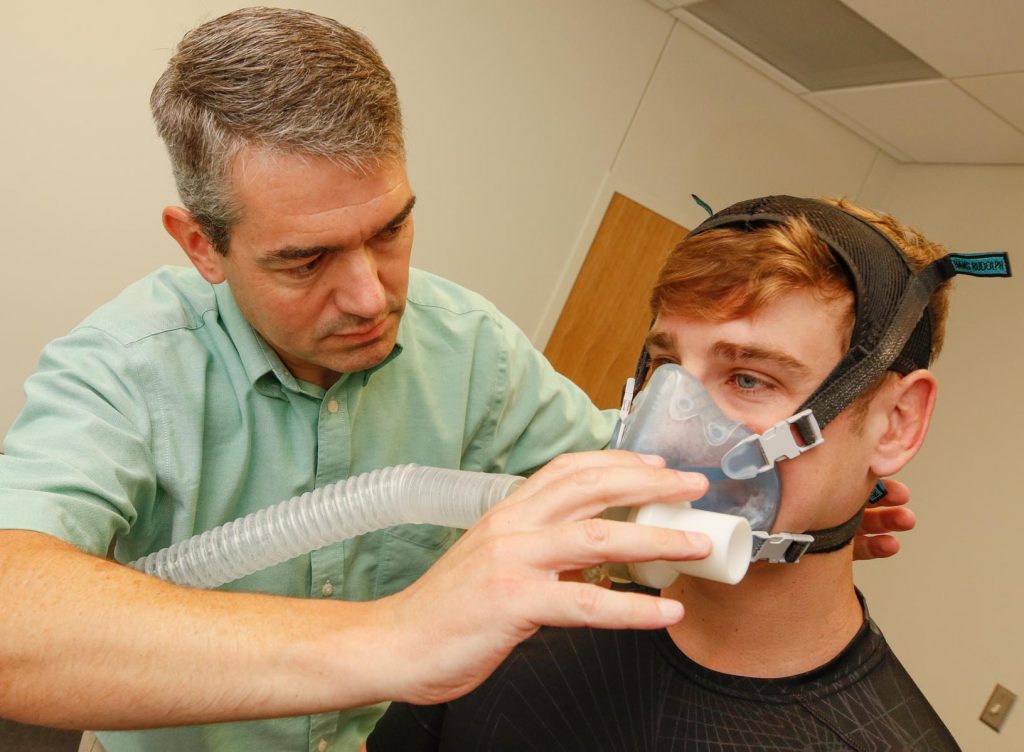 While Brown’s research regarding physically active video games may not have led him in the direction he was hoping, he’s still able to use the knowledge and insights gained every semester in his exercise science classes.

He has a lab where students measure heart rate while playing video game boxing and sword fighting.

“Sure, we can put them on a treadmill or bike, but they can play the video game and have a little fun with it while learning the same concepts,” Brown explained.

In order to keep things fresh in the classroom, Brown incorporates his research in to class as much as possible.

For example, if Brown is lecturing about heart rate in response to exercise, he has research and data that looks at different heart rates in student-athletes during different types of workouts from a previous project.

“That way, it’s not just all textbook,” he said. “I can say, ‘this is stuff I’ve had students work on to actually confirm this type of information.’ By doing research, it keeps me viable for the classroom.”

When Brown was a graduate student at Iowa State University, working toward his master’s and Ph.D., it was at the height of the steroid era in Major League Baseball.

In 1998, Mark McGwire smashed the MLB record for home runs in a season, breaking a mark that had stood for 37 years.

During that season, McGwire took a nutritional supplement called androstenedione, a human hormone that could also be extracted from plants. Because of the plant element, it was sold as a supplement. And the thought at the time, Brown says, is that it was being sold as a legal alternative to anabolic steroids. 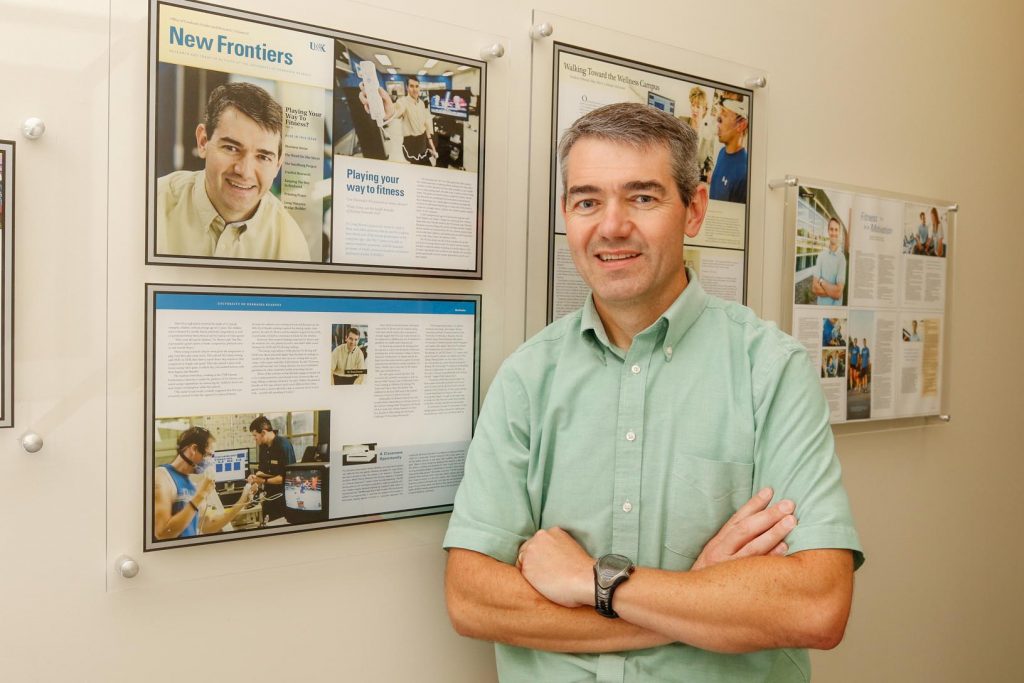 People thought McGwire was hitting so many home runs because he was taking androstenedione, but there was no research done on it.

Brown’s adviser at Iowa State, Doug King, received a grant from a supplement company to research the hormone.

In the exercise science world, androstenedione was a curiosity. And in the popular culture world it was just as eye-catching.

“It became a big deal because of the whole Mark McGwire thing,” Brown said. “ESPN had an hour-long special on the Andro debate because nobody knew what it did.”

As a part of Brown’s study, 40 college-aged men engaged in strength training three days a week for eight weeks. The subjects were either supplementing or not. The researchers measured body composition, muscular strength, various hormones, cholesterol levels and other related measurements.

That’s where the team of Iowa State researchers discovered that androstenedione didn’t promote any adaptations to training and did much more harm
than good.

In 1999, Brown co-authored “Effect of Oral Androstenedione on Serum Testosterone and Adaptations to Resistance Training in Young Men.”

It was one of the first developments of research regarding androstenedione.

“It was really cool because we had scooped everybody. Nobody else had research on it,” Brown said. “Major League Baseball had commissioned a big study at Harvard, but we published our results before they did. Until then, everybody knew about the Harvard study, not what we were doing at Iowa State.”

His research on androstenedione influenced legislation, too.

So much about Greg Brown’s area of study is the inclusion of other individuals – both as researchers and subjects.

Ever since he was a graduate student, Brown has had undergraduates assisting with research. But once he came to UNK he was especially able to involve students through the University of Nebraska at Kearney’s undergraduate research programs. 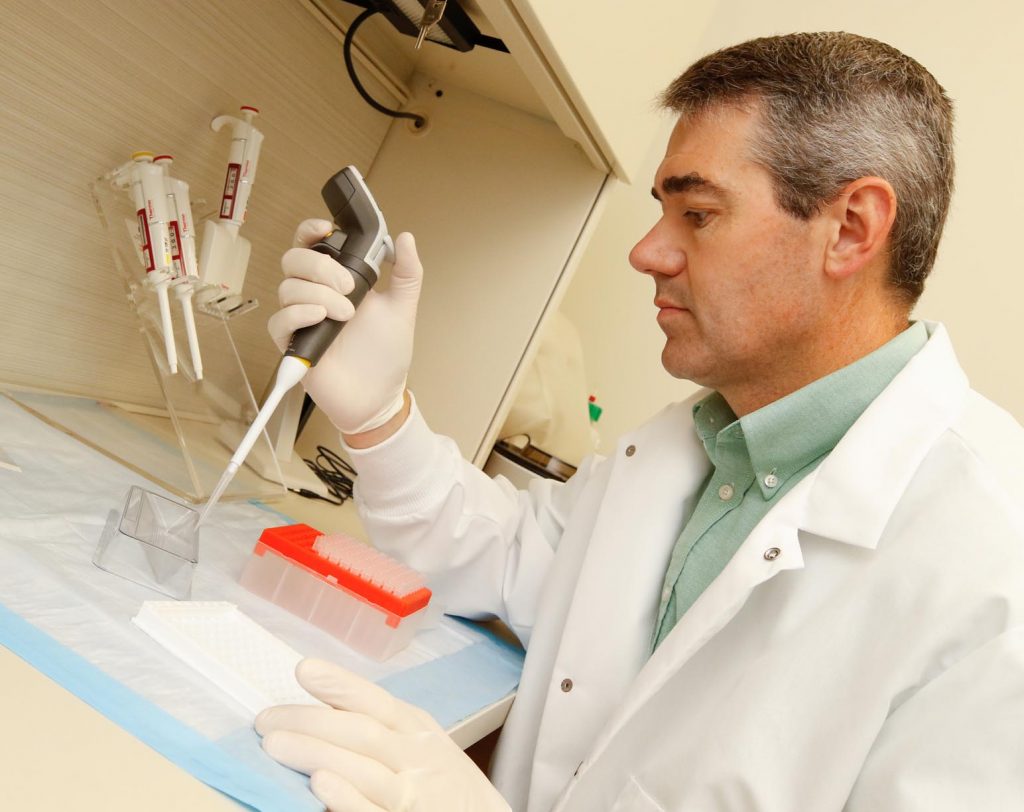 Brown, who just completed his 13th year of teaching at UNK, began working with students in the Summer Student Research Program. Then once the Undergraduate Research Fellows developed, he quickly started mentoring students through that progam as well.

By working with students on research, it serves a dual purpose for Brown.

“By helping them with their questions, I can look at what research is being done,” he explained. “It helps me keep current to know what is being researched and what areas are open to research, what questions have or haven’t been answered.

“If you’re researching the same thing all the time, it feels like it can get a little boring. The students keep it from getting boring.”

It also enriches the student experience and helps develop interest in research.

Going back to his work with androstenedione, Brown has always had questions about supplements.

He also has many students with questions about energy drinks and their impact on exercise.

Energy drinks are widely available and popular among athletes and non-athletes, and Brown set out to find the effects of energy drinks on resting and exercise energy expenditure and metabolism.

Through the Summer Student Research Program, he was able to guide the student, Janae Nienhueser, to the conclusion that many claims made by energy drink companies weren’t true. The research, “Effects of Energy Drinks on Metabolism at Rest and During Submaximal Treadmill Exercise in College Age Males,” was published in 2011 in the International Journal of Exercise Science.

The study measured resting metabolic rate (RMR) and respiratory exchange ratio (RER) in 10 healthy males. The subjects consumed one of three commercially available energy drinks. RMR and RER levels were then measured one hour later. The individuals involved with the testing then engaged in 15 minutes of treadmill exercise.

The data indicated that energy drink consumption increased RMR and carbohydrate use at rest, but metabolism during submaximal exercise remained unchanged.

“People always have questions about their energy drinks,” Brown said. “Hopefully the students don’t take the advertisements at face value and start to think critically about what they’re being told by advertisements.”

Brown is also able to tie his research into the Kearney community.

Every year, one or two Boy Scout troops come to the Wellness Center, and his exercise science students help with fitness testing for the Personal Fitness merit badge. When the Susan G. Komen Race for the Cure was hosted in Kearney, Brown served as the race director for three years. His students were involved with marking the course, packing t-shirts, timing the race and serving as course marshals.

“The thing that would make the day the best for research is when it’s not just me,” Brown said.

One of Brown’s favorite aspects regarding his field of research is his ability to provide knowledge that benefits others.

“I really like to answer questions that are practical to people,” he said. “It’s always cool if you can find something that means something to other scientists, but I want something that affects other peoples’ lives.”

The video game research is a good example. 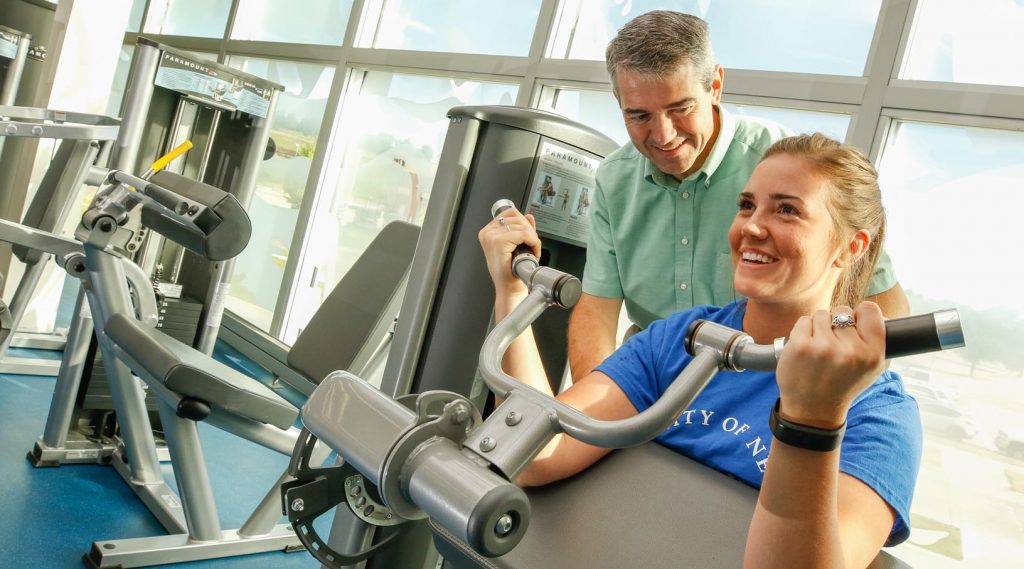 Brown said that while he would have loved to tell people to buy a Wii to help them lose weight, he knew it would not provide drastic changes. However, he also knows there’s value in the fact that using a Wii is better than not exercising at all.

Most importantly, Brown wants something with a take-home message that can have a meaningful impact on people.

“I would love to be able to say with my research that if you are engaged with aerobic training and strength training, and you do it this much this many times a week, you are more likely to lose weight because you eat fewer calories and you burn more,” Brown explained.

“Or, something like when people go for a snack, they’re more likely to choose a health snack versus a candy bar or soda.

“It’s easy to say that, but to actually have numbers to back it up is important. Those may not be the answers we get, but hopefully we can find something that will make a difference.” 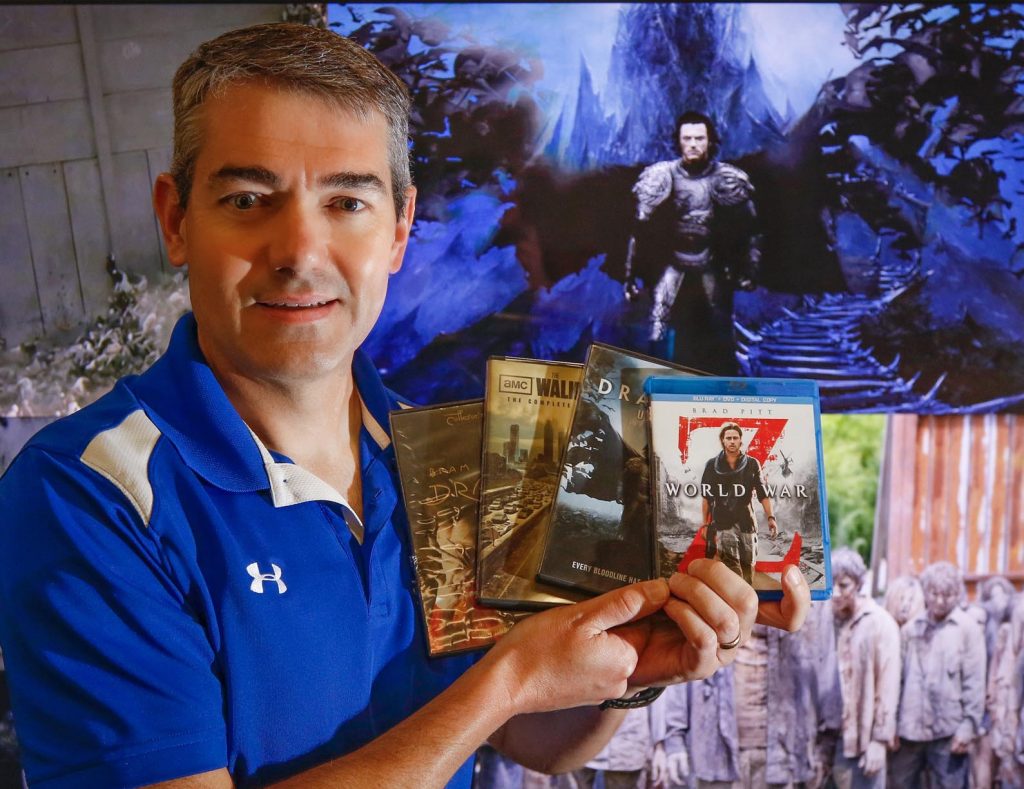