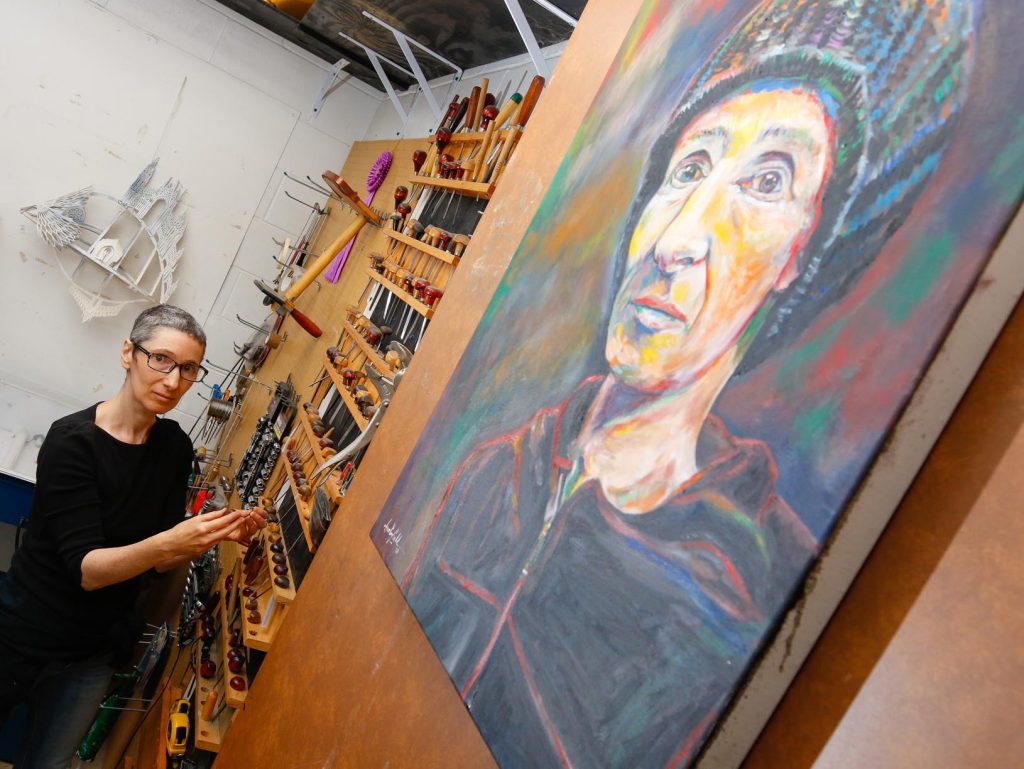 Like many artists, Victoria Goro-Rapoport’s world is wrapped up in journey, process and discovery.

This print maker has experimented with a number of ways to make prints, with each method containing technical limitations that ultimately proved unsatisfying as a medium. But as she has experimented and refined techniques, she may have landed, through serendipity, on a new printmaking method that combines technology and materials in different and fulfilling ways

Goro-Rapoport’s story starts in the former Soviet Union, where she was born.

In addition to regular school, she attended a special arts school for an additional four hours, three days a week. She kept this demanding schedule for eight years through primary and secondary school. She graduated from Moscow Art College in 1985. She was 24 in 1990, and the Soviet Union was disintegrating. She took advantage of her Jewish heritage and emigrated to Israel, where she opened a frame shop and took classes in printmaking. Four years later, she immigrated to Salt Lake City, where her parents were living. There, she took a master’s degree in theatrical set design. That, she said, was a mismatch. A bad fit. And as soon as she graduated from the University of Utah, she entered the University of Illinois, and earned another graduate degree, this time in printmaking. She joined the University of Nebraska at Kearney faculty in 2004 as a professor of printmaking and drawing. 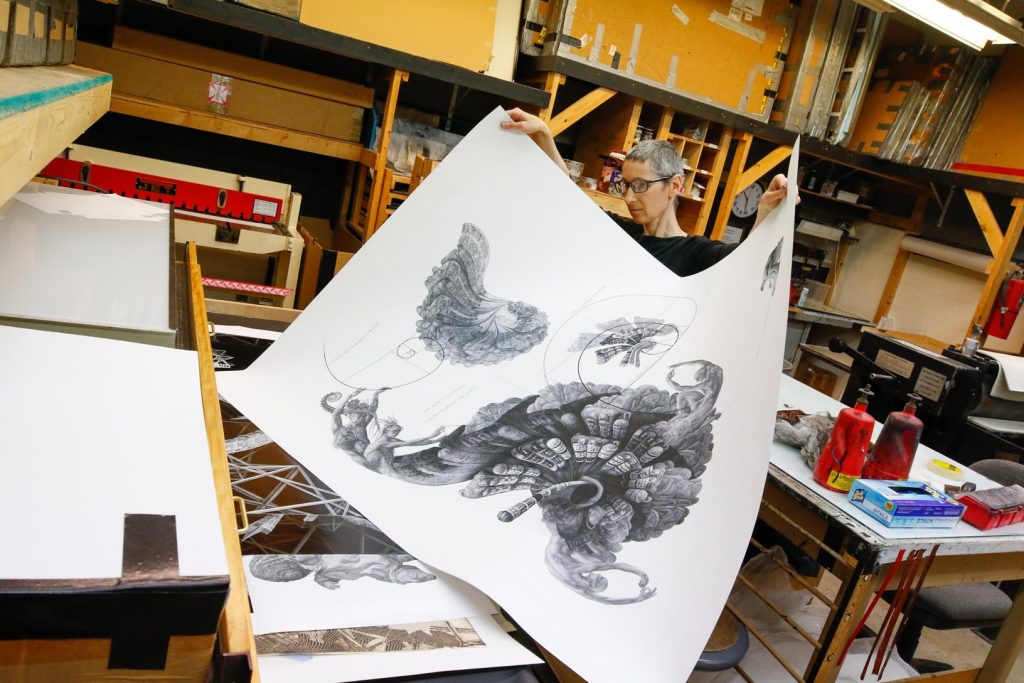 While she enjoyed theatrical set design, she found the impermanence of theater sets to be limiting. She also wasn’t enamored of the amount of collaboration and teamwork required in the theater. But she found great joy in drawing and imaging the designs themselves, and she also enjoyed the intersection of architecture to humans on the set – the relationship to people and surroundings. That interest is still evident in her choice of subject matter for her prints, which often depict structures, people, fantastical animals and nature.

“My art focuses mostly on figures and their relationship to space. I am very interested in architecture as created by man as well as the idea of architecture as a life force.” By that she means the symmetry and architecture of animals, plants, people and the forms of nature. Think of the mathematical relationship of the 3:5:8 ratio to the Fibonacci curve. That gentle unfolding sequence is found in all of nature – from the sequence of the unfolding petals of a rose, to the shape of a conch shell.

“Architecture like that is imbued in all life forms and can be seen in arches, scrolls and the symmetry of our bodies,” she said.

Goro-Rapoport abandoned theater work and moved into printmaking and drawing. And she started her quest for the “perfect” printmaking technique that would best showcase her aesthetic.

Her early work centered on a tried and true medium – etching. This demanding process involves using a needle-like tool to scratch (etch) her drawings onto a copper plate coated with an acid-resistant material called ground. The scratching removes the ground and the plate is dropped into acid, which etches a groove into the plate where the ground was scraped off. When the etches are complete, the plate is cleaned of ground and ink is applied. The ink settles into the grooves and once the plate is pressed onto paper, the print is revealed.

“This is a very harsh process,” Goro-Rapoport said. “The initial attraction was the thin, crisp precise lines it creates. It allows much control. But it only creates those harsh, sharp lines. Not soft lines like one sees with a pencil.”

And she was searching for a way to replicate the pencil’s softness.

She moved on to mezzotint. In this process, a half-mooned shaped tool is rocked across the surface of the plate, making a rough surface that then is smoothed in ways that create varied tones of light and dark on the print. Mezzotint is a “dry process” in which all variations in tone are created by tools. Rough areas of a plate hold more ink, so rough areas print darker than smoother areas.

“It’s a very laborious process,” she said. “It’s very physical work for the printmaker.” Mezzotint plates are fragile and they wear quickly, yielding few prints. And often they do not print correctly after all the preparatory work. 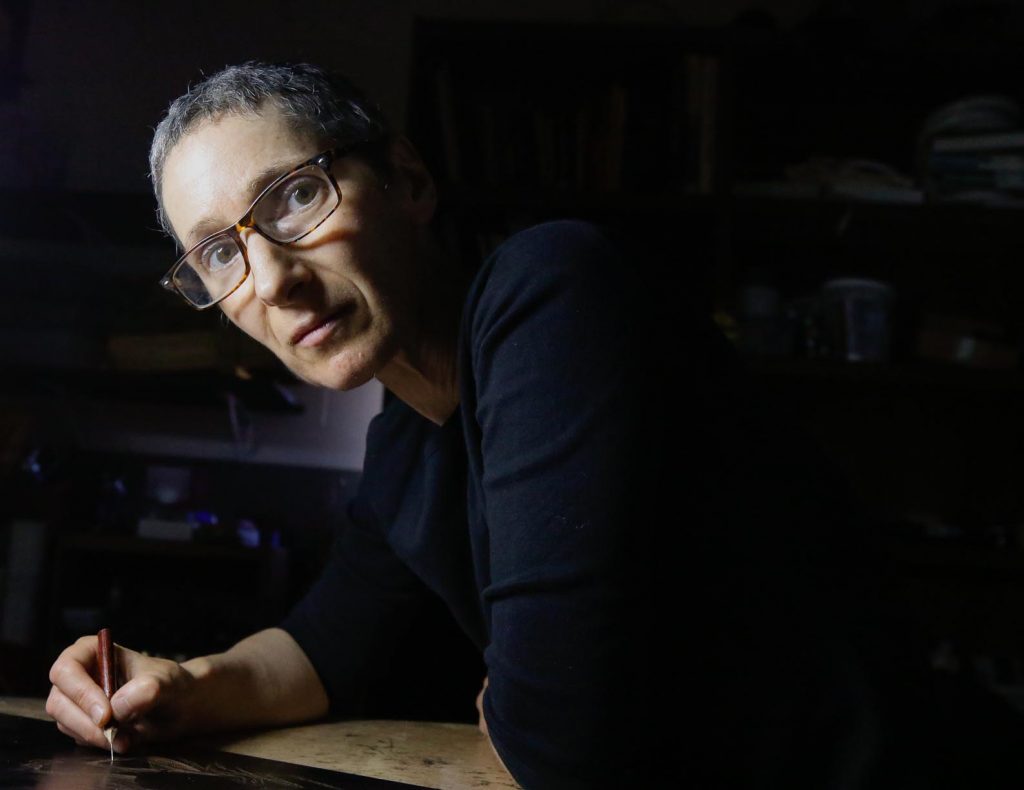 “Mezzotints really wore me down,” she said.

Goro-Rapoport was still searching for a way to incorporate smooth, soft surfaces with etching. Her subjects, often human bodies, are soft and vulnerable, she noted, while architecture is sharp, precise and hard. How to combine the two into a satisfactory medium? How could she take her drawings, which often took months to finish, to the plates in less labor-intensive ways?

She moved on to photoplates, which allowed versatility but lacked precise values – they were neither as crisp as originals, nor as soft. “I never got to a level I found completely satisfying.”

Goro-Rapoport said she puts so much emotional investment into the drawings that to be unable to realize the final steps was grueling and disappointing.

Would scanning and replicating via photocopies an option? Combining digital processes with etching was, she said, “horrible.”

“Etching has a hand-made charm, but when combined with the digital they negate each other. It is too big of a clash. It looks cheap. Horrible.”

And then, a breakthrough.

“Accidentally, almost by chance, I learned you can do digital printouts on wood. That adds a depth to the piece that is almost organic. The wood gives it a luminous quality.

“I’m kind of excited about this because it’s not really a print anymore. It becomes more of an object.”

This also seems to coalesce with a bit of a change in the content of her images and how she is manipulating them. She now uses a computer to expand and blow up shapes, such as traditional Archimedean solids reinterpreted into forms previously unknown. “We perceive our world in five senses, but there is a world that is invisible to us,” she said. The computer can reveal this world, simultaneously depicting the inside and outside of a shape in fantastical ways.

Some of her pieces contain images of children or angels playing with objects of violence. She also depicts things like birds or fish (she finds mammals and furry things artistically boring) that morph and evolve so the bird’s wing might end in a human hand.

There are machines and other mechanical devices such as floating air ships. Often the works have a steam punk vibe, a sort of retro-futuristic look that incorporates 19th century industrial technologies and aesthetics with fantasy or apocalyptic worlds. For example, one of her award-winning etchings, “Sinking of the Empire,” features what appears to be a man’s head atop the Empire State Building, with laboring men and a ship all bound up in ropes and wires.

That may come from her Soviet upbringing, she said.

Embedded in the Soviet psyche is the concept of “boys draw war,” she said.

“As children, we would draw tanks and war items because they were so much the part of our culture since World War II. We wanted to be the heroes of our context as players on the world stage. I think for me, as a civilization we are smart and technology driven, but we are in the infancy of technology. It only started about 150 years ago, but homo sapiens are 200,000 years old. We are only just now learning how to harness some parts of technology. So we are in the infancy stages of something with tremendous potential for creativity but also tremendously dangerous. We have made discoveries as part of the war machine and adapted them to civilian use. We need to harness our emotions on how to use that technology. So thus the children images, to me, represent innocence and vulnerability as we live in the wider universe.” 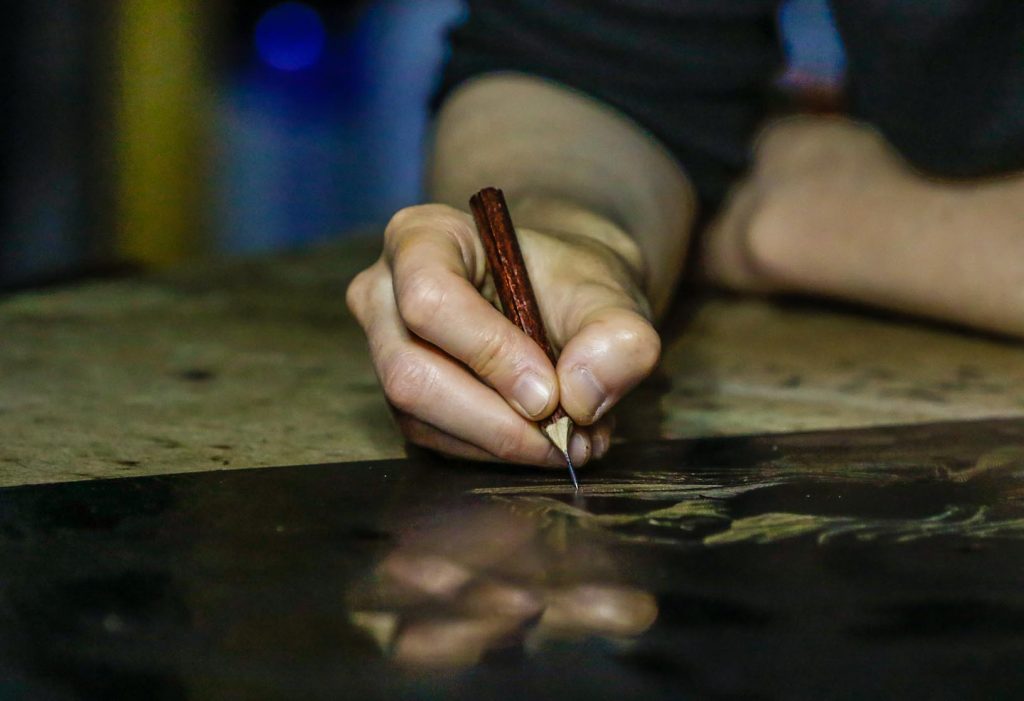 Goro-Rapoport’s art has resonance and has won numerous awards in more than 300 juried and invited art exhibitions worldwide.

Her most current work involves creating triptychs, traditionally three pieces of art often associated with religious altar pieces in early Christian churches. The subjects, however, are not the Madonna and Child images, but portraits of scientists Galileo, Isaac Newton and Albert Einstein. She depicts them wearing each other’s hair or clothing and comingles them with pieces of architecture, their own art and animals.

“I guess I am trying to say ‘has science become a religion?’,” she says of the works. “It’s a little bit subversive. I came from a society that was violently atheistic – there were no believers. Now, I find myself in a very religious society here in America. It was a sort of an intriguing culture shock for me and an interesting way for me to play with the architectural shapes I love and finding points of connection between human shapes and evolution.”

Goro-Rapoport collects her inspiration from the works of artists from the Northern Renaissance – artists such as Rogier van der Weyen, who worked in Belgium in the early half of the 15th century, or Hugo van der Goes, a late 15th century Flemish painter. These artists often painted on wood, and their works have a luminosity not found in works on canvas. So her ability to print on wood has a straight-line connection to those artists.

She has another connection to those Dutch painters: she has created for herself a pair of wooden clogs that she wears in her studio. Crafted from chunks of 2x4s with leather straps, the clogs add several inches of height to the diminutive artist as she works at a tabletop about 5-feet high. The bi-level clogs show off her creativity and resourcefulness, and they protect her feet.

Printmaking is a technically demanding medium. It’s hard to correct errors. It’s dirty and physically hard; it involves dangerous chemicals. But while there is just one painting or drawing, a printmaker may be able to pull 30 to 50 quality prints from a plate until it degrades, she said. The art form has fewer practitioners than in the past, and yet it’s timeless, she notes. While she loves drawing, she felt her drawings were unfinished as fragile works of art until they were advanced to printmaking. There, she said, the works gained permanence and felt finished.

She doubts she will ever stop experimenting with printmaking. But now she feels less deadline pressure and free to continue the journey, the process and the discovery of art making. 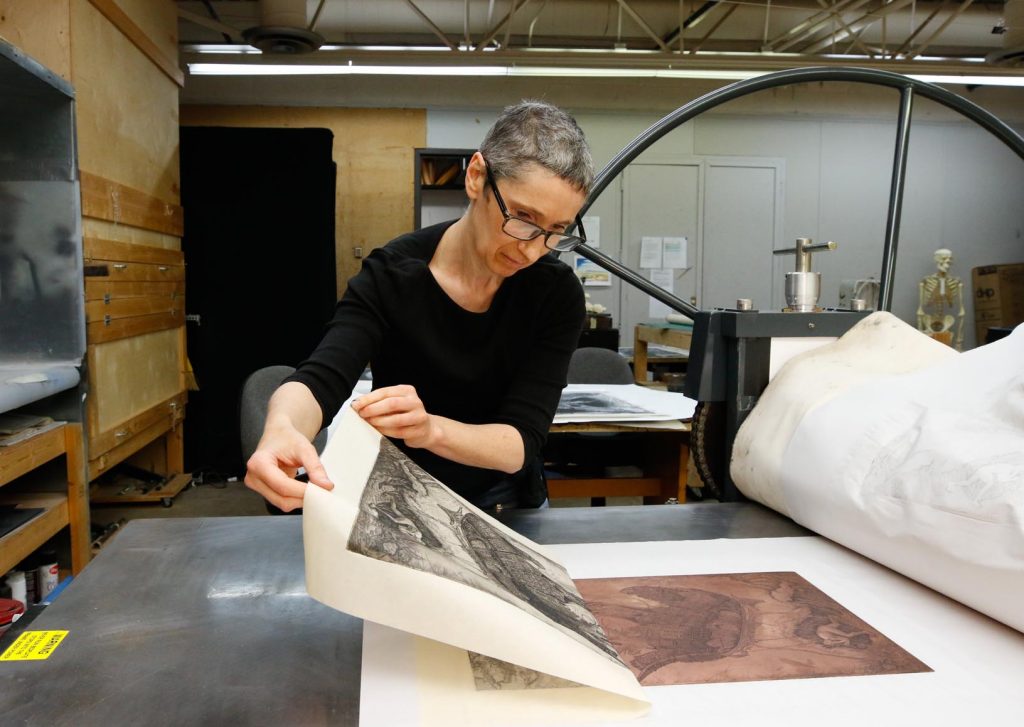 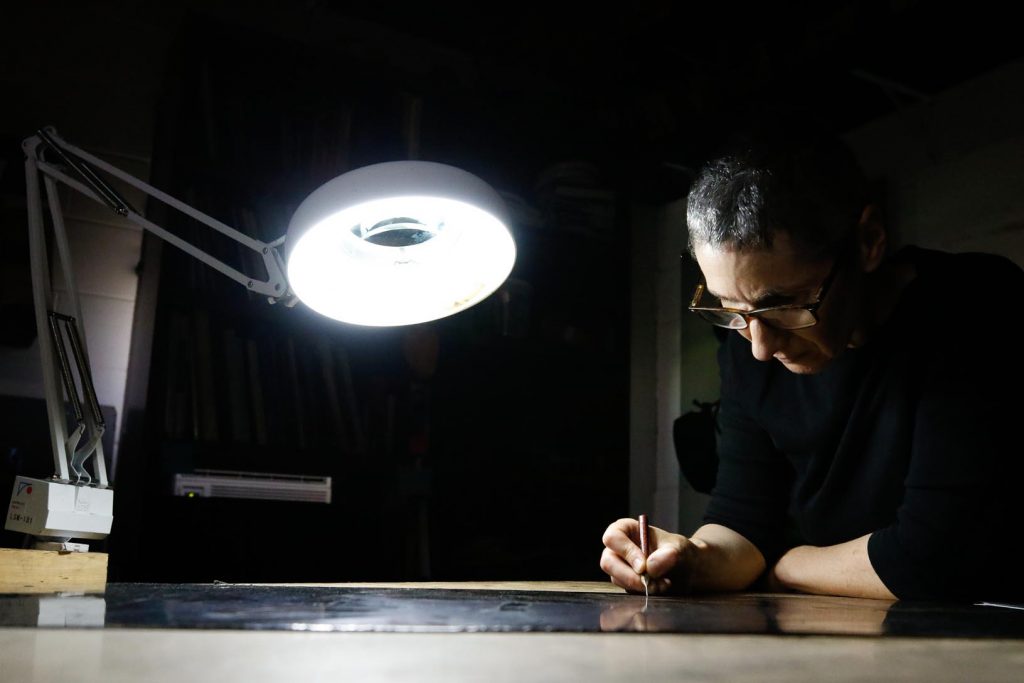 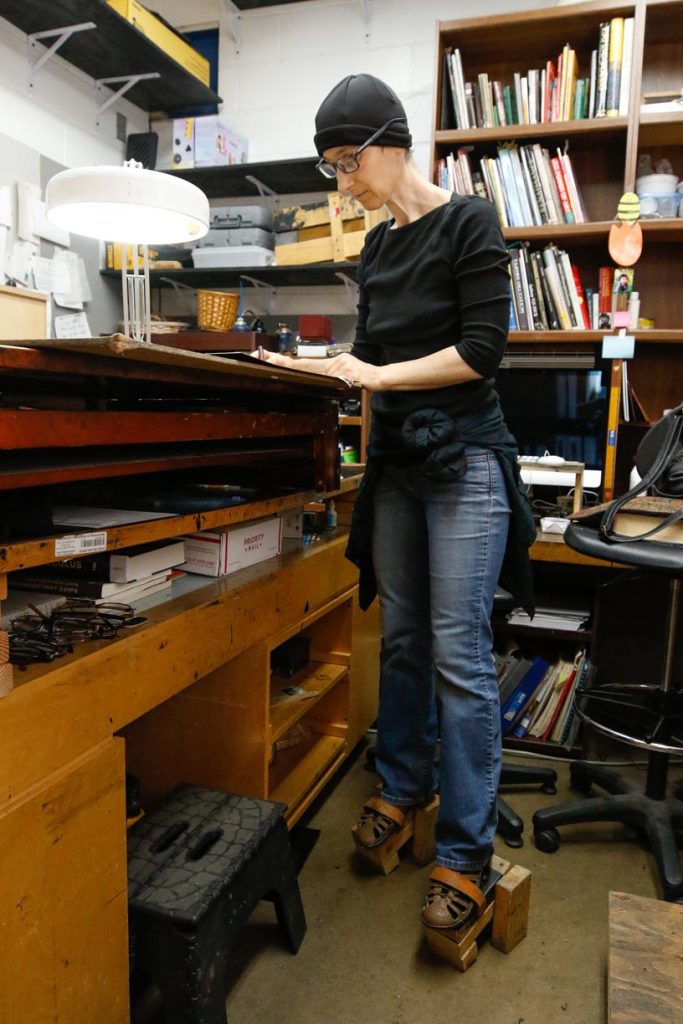