WHAT: Warner Lecture Series, “Can There Be, Or Should There Be, Another Jerry Warner?”
SPEAKER: UNK Chancellor Doug Kristensen
WHEN: 4 p.m., Thursday, Aug. 31
WHERE: Copeland Hall 142, 2507 11th Ave., Kearney
COST: Free and open to the public
HOST: College of Natural and Social Sciences

KEARNEY – Chancellor Doug Kristensen is the featured speaker at the inaugural Warner Lecture Series at the University of Nebraska at Kearney.

Kristensen’s talk – “Can There Be, Or Should There Be, Another Jerry Warner?” – is at 4 p.m. Aug. 31 at UNK’s Copeland Hall room 142. Hosted by the College of Natural and Social Sciences, the event is free and open to the public.

The new series is hosted to recognize the service of Charles J. Warner and Jerome Warner, two prominent Nebraska state senators – father and son – who played a significant role in UNK’s history.

Often referred to as the “grand old man of Nebraska politics,” Charles J. Warner led the effort to establish Kearney Normal School in 1903 while in the Nebraska House of Representatives.

Charles Warner was a member of the Nebraska House from 1901-1907, Nebraska Senate from 1919-1937, Nebraska Unicameral from 1937-1939, and served as the combined legislature’s first Speaker. A farmer and cattle breeder, he was later elected lieutenant governor four times, serving from 1949 until his death in 1955 at age 80.

Jerome Warner himself became the next “grand old man,” serving 35 years in elected service (1963-1997) as state senator, including as Speaker, and heading committees on Education, Appropriations, Revenue and the Executive Board. He led efforts on bills related to state school aid, forming the Department of Administrative Services, limiting property taxes, highway and road funding, development of the biennial budget process, among others. His leadership helped make Kearney State College part of the state university system in 1989.

In March, UNK’s Founders Hall was named Jerome and Charles J. Warner Hall as a tribute to the two longtime supporters.

The idea to honor the Warners arose during the “Year of Celebration” at UNK in 2016, during which the university celebrated 111 years as an institution, and 25 years as part of the University of Nebraska. 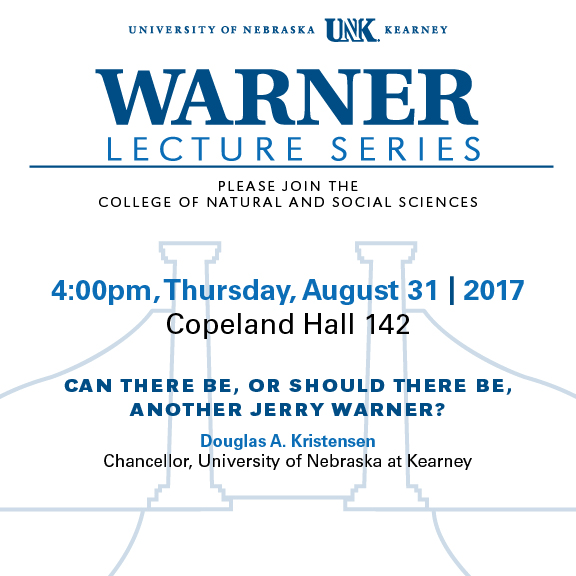