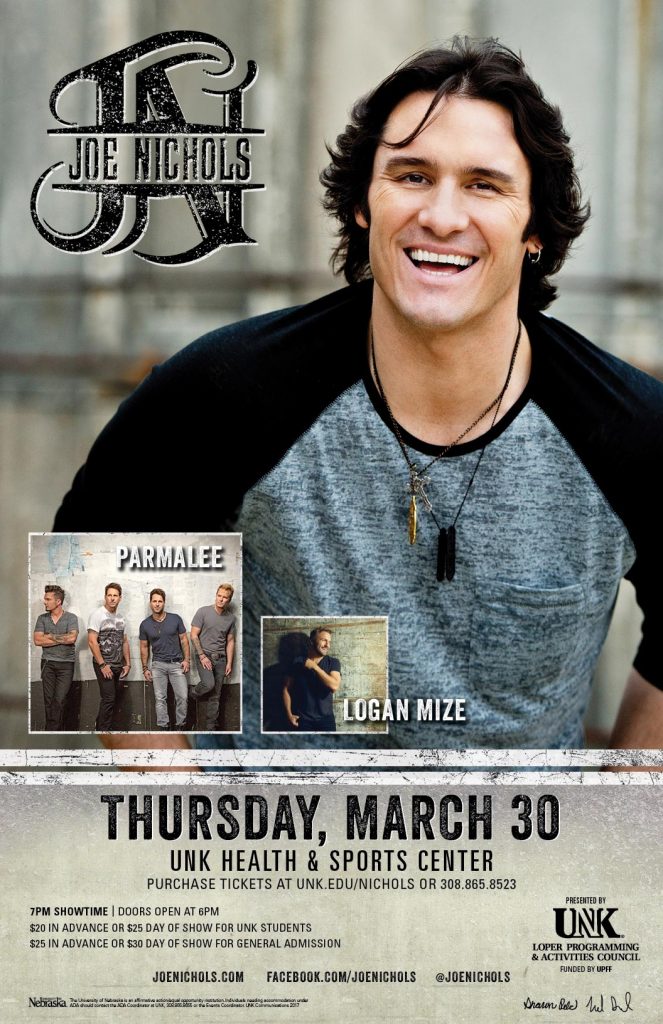 KEARNEY – Four-time Grammy nominee Joe Nichols is headlining this spring’s concert at the University of Nebraska at Kearney.

Nichols is no newcomer to the game. He’s been performing since the late 1990s and has six No. 1 hits and eight Top 10 singles to his credit. Among the hits are recognizable songs “Tequila Makes Her Clothes Fall Off,” “Gimme That Girl” and “Brokenheartsville.”

Opening for Nichols is platinum-selling country rock band Parmalee, a 2016 Academy of Country Music nominee. The band’s latest single “Roots” is off its highly-anticipated sophomore album.

Parmalee’s biggest hit to date is “Carolina,” which was released in 2013 and reached No. 1 on Billboard’s Country Airplay chart. “Already Callin’ You Mine” also made Billboard country top 20 charts for radio play and sales in 2015.

Also opening the show is Kansas native Logan Mize. Known for his rugged voice and merging mainstream country with front porch rock, his 2015 single “Can’t Get Away from a Good Time” was a breakout hit on SiriusXM’s the Highway last year.

Mize’s 2012 national CD release “Nobody in Nashville” charted to No. 15 on Billboard’s Heatseekers Albums. His latest single is the 2016 release “Ain’t Always Pretty.”