KEARNEY – The Kovanda family can always find a reason to laugh.

Even as Katie Kovanda’s father, Tom, became critically ill with a rare lung disease, the family continued to look for humor in everything.

“Because of my dad, I’m not afraid to be outspoken,” said Kovanda, a University of Nebraska at Kearney sophomore elementary education major from Grand Island. “He has shown me by example how great it is to be content with being unique and living loudly.”

A lawyer for 33 years, Tom Kovanda became ill in 2006. He left his practice when he became critically ill in 2011. 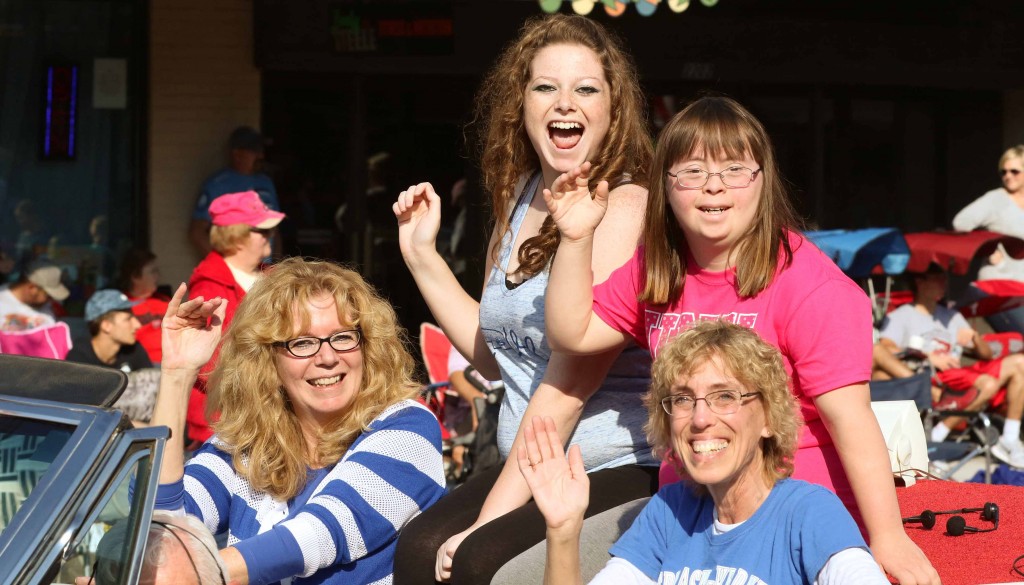 “He lives by the motto, ‘I get paid to be serious, I’m not going to do it for free,’” Katie Kovanda wrote in her Outstanding Family application. “Having conquered death numerous times, my dad is certainly my reminder to never take life for granted.”

Any UNK student can nominate their family for the Outstanding Family Award.

“I would be nowhere near where I am today without the immeasurable amount of love and support my mom has given me my entire life,” Kovanda said. “I was very young when I told her I wanted to be a teacher, so she bought me a collection of stuffed frogs so I could teach ‘frog school.’”

As UNK’s Outstanding Family, the Kovandas and invited guests were treated to lunch, rode in a convertible during Saturday’s Homecoming and Band Day Parade, received complimentary Loper gear and watched the football game with Chancellor Doug Kristensen from the Nebraskan Student Union skybox.

Because her dad was unable to participate in the Outstanding Family activities, Kovanda invited her fourth-grade teacher, Nancy Chavez from Seedling Mile Elementary in Grand Island, and her daughter, Serena. “She is my mentor and my reason for pursuing elementary education,” Kovanda said of Nancy Chavez.

Kovanda hoped Outstanding Family activities would be exciting for Serena, who never had the opportunity to wave in a parade. “Serena is like my little sister and certainly one of my dearest friends. We can’t promise to be a traditional family, but we can promise to stand out,” Kovanda wrote in her application.

Kovanda describes her family as being humorous, loud and always trying to find the humor in sad things.

“It was very exciting and meant a lot to me,” Kovanda said of receiving the Outstanding Family Award. “I saw my family worthy of receiving the award because I think I have an amazing family. I didn’t know other people would see my family that way as well.”

Kovanda has a brother, Joe, who is studying physics at the University of Nebraska-Lincoln.