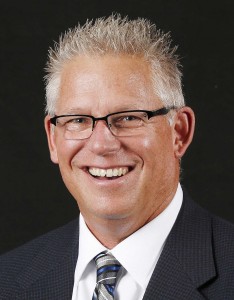 “It is with great appreciation that we recognize the many contributions Darrell has made to UNK during his 28 years,” said Plinske. “He displayed great passion and enthusiasm for his profession and this institution. He devoted countless hours to our student-athletes and the Kearney community. We thank Darrell and wish him well in his future endeavors.”

Plinske said a national search for a new head football coach will begin immediately. A transition team of some of the current staff has been assembled to provide stability for the program and help with ongoing recruitment efforts.

“It is my goal to have a new coach in place by Jan. 1, 2015,” Plinske said. “I am confident in our ability to attract highly qualified coaching candidates to this job. We will seek a leader whose vision for our football program mirrors that of our athletic department. Our fans and the entire university value the strong tradition of Loper football, and we are committed to making it a successful program.”

Morris was the 16th coach in the Lopers’ 107-year football history.

“I would like to thank everyone at UNK that supported me during my tenure as Head Football Coach.  It was a privilege for Darla and I to be a part of the Loper Football Family for the past 28 years.  I had the honor to work with some of the best coaches and student-athletes that have ever worn the blue and gold.  We also want to thank all our friends in the Kearney community for their support as we worked to turn Loper Football into a competitive program in the MIAA.  I am very proud of all that we accomplished over the past 15 years.”

Media: A media availability with AD Plinske is planned for 10 a.m. Monday in the Zikmund Room at Health and Sports.