KEARNEY – Numerous facility improvements, building renovations and equipment upgrades in the athletics department will greet fans when University of Nebraska at Kearney teams return to action in September.

“We are making major investments in our facilities. To move us forward, we need to create an atmosphere that excites our fans and student-athletes,” said UNK Athletics Director Paul Plinske. “We want facilities that people embrace and are proud of.”

Work on numerous projects started in April, and the renovations are expected for completion in 2015. 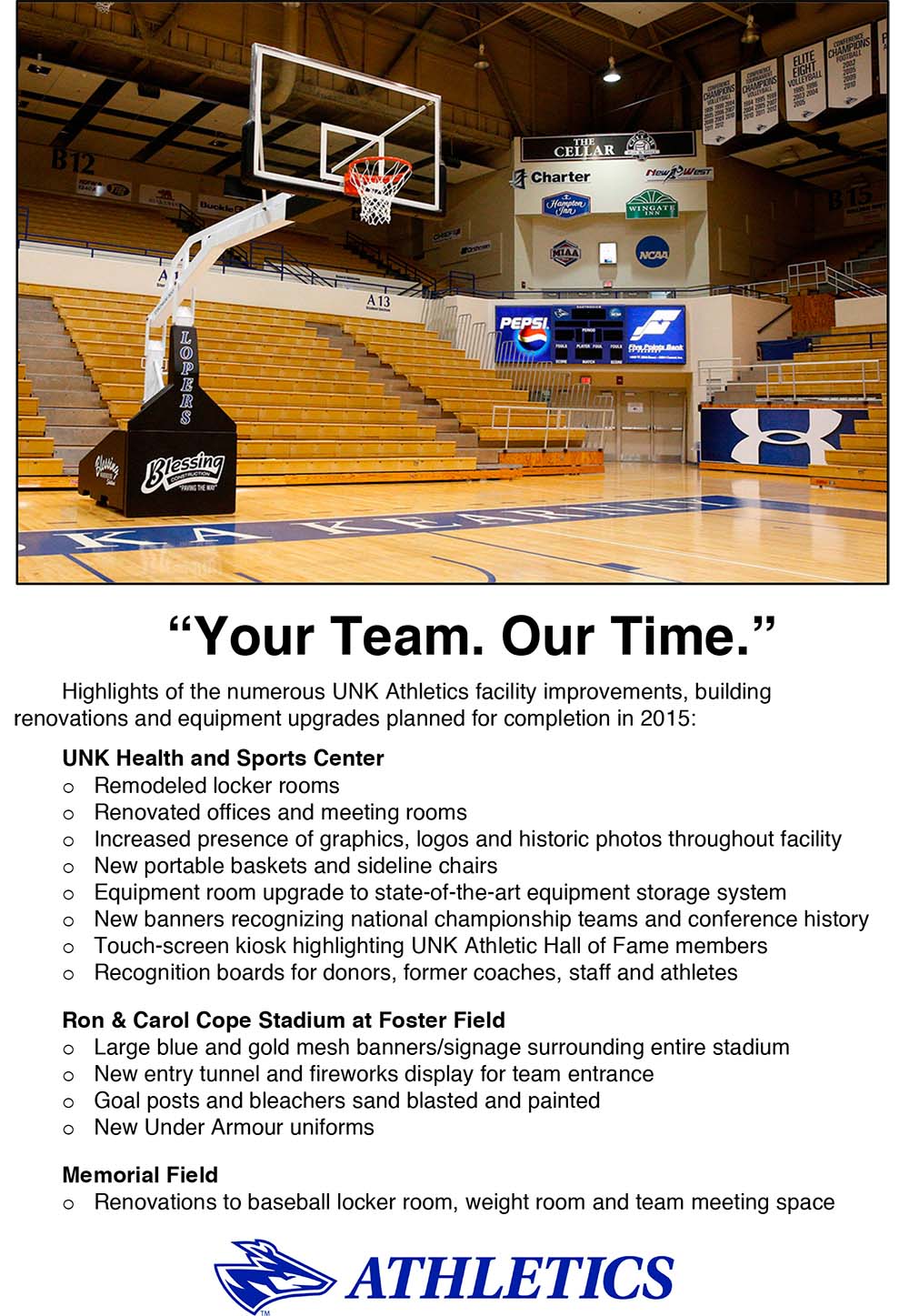 The first phase is a $450,000 investment, with funding coming from multiple sources that include university, corporate and private support.

The centerpiece in a long list of improvements is the 5,600-seat UNK Health and Sports Center, which opened in 1990.

Highlights of the project include remodeled locker rooms, renovated offices and meeting rooms, and increased presence and display of graphics, logos and historic photos throughout the building’s stairwells, entrances and main corridors.

In addition, new portable baskets and sideline chairs were purchased for basketball. The equipment room has also been upgraded to include a state-of-the-art Spacesaver equipment storage system.

“Our goal is to create a unified vision for Loper Athletics, and it starts with how we look and present ourselves,” Plinske said. “Aesthetically, these are the first significant upgrades to this building in 25 years. It is a much needed facelift.”

Plinske said a significant focus is being placed on embracing the history of UNK athletics. New banners will be hung recognizing UNK’s national championship teams, while framed team photos and other graphics will honor teams of distinction, athletes of the year and UNK’s conference history.

“This is a great opportunity for athletics to tell our story,” Plinske said. “We want to create a ‘Wow’ factor while capturing our history and sharing it in meaningful and inspiring ways.”

Plinske said former Sports Information Director Don Briggs will be memorialized, and a special award is being created to honor former swimming and softball coach Joan Bailey for advancing women’s athletics at UNK.

“Telling the story of where we’ve been is important. It’s important to showcase and respect our history and the rich tradition of Loper athletics. We can’t go forward if we don’t know where we’ve been,” said Plinske.

UNK also is sprucing up Ron & Carol Cope Stadium at Foster Field. Goal posts and bleachers have been sand blasted and painted. Large blue and gold mesh banners also will surround the entire stadium. The new signage was unveiled in June for the Nebraska Shrine Bowl game and received strong reviews.

“When the Shrine Bowl was on TV it was evident that it was being played on the UNK campus, and that’s important,” Plinske said. “It provided a visual impact highlighting the UNK and Loper logos. With all of our facilities, we want to create an incredible visual presence that draws people in and makes them excited to be a Loper.”

Football game day improvements are also planned for Foster Field, said Plinske, including an entry tunnel and fireworks display for the team entrance. The Lopers also will unveil new Under Armour uniforms this fall.

At Memorial Field, home to the Loper baseball team, renovations are being done to the locker room, weight room and team meeting space.

Plinske called all of the improvements a “positioning statement,” and used a newly-adopted slogan – “Your Team. Our Time.” – to explain how UNK wants people to view the Lopers.

“We are trying to position Loper Athletics in the community and let our fans know that this is their team. We need and value their support.

“It’s also our time. This is our third year in the MIAA. It is our time to step up and be one of the premier programs in the conference. It’s our time to be at the table competing for top three finishes in every sport.”

“You can see some renewed excitement. We are trying to create an energetic setting where they know they are valued and appreciated. It’s important to me to have an operation that looks and feels first class. Our staff, recruits, student-athletes and donors need to see and feel that if we want to make an impact in the league.”