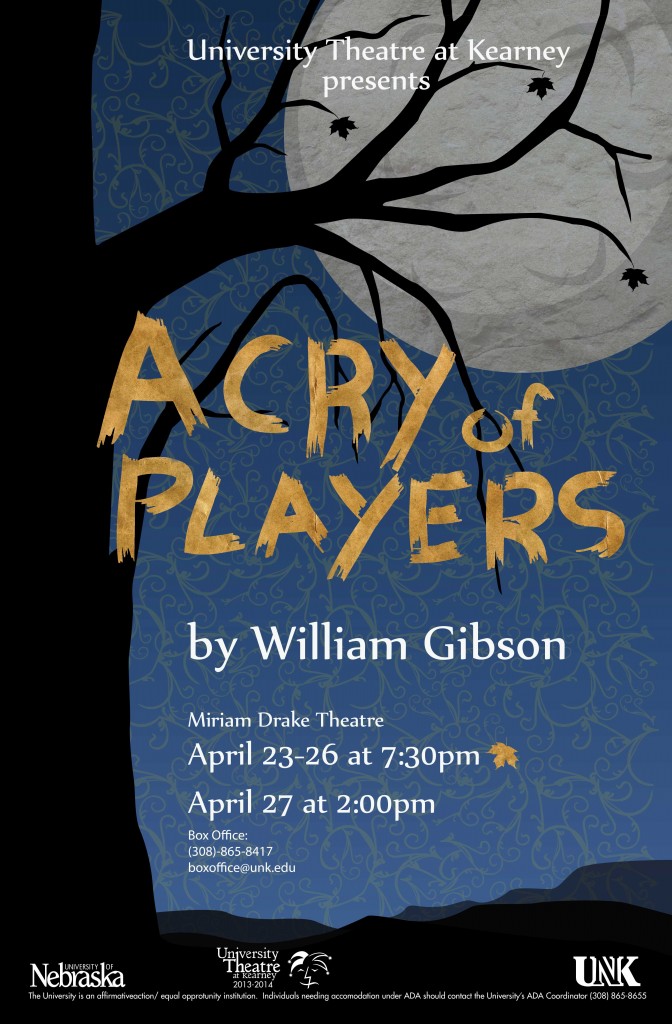 KEARNEY – The University of Nebraska at Kearney Studio Theatre’s production of “A Cry of Players” is a journey of moral perfectionism.

“This is a story that many many people can identify with,” said production director Sam Umland. “What do you do to enable yourself to become who you really are?”

“A Cry of Players,” written by William Gibson, is the fictionalized story of William Shakespeare’s life as a young man in Stratford.

Gibson presents young Will (Kyle Mundil of Winside) as the high-spirited, strong-willed, responsible husband of the eight-years-older Anne (Madison Hoge of Omaha) and father of Susanna (Taylor Ritz of Comstock) and recently born twins. Despite his love for his wife, he was a dallier with the town tarts, a carefree worker at his father’s trade and an occasional companion of poachers on the local estates.

When a troupe of inherent actors come to town, Will is determined to be himself – even if it means leaving his home and family.

“‘A Cry of Players’ is one possible version of the life of the young William Shakespeare before he became the person known as William Shakespeare,” Umland said. “For such a famous person, we know very little about him. This is a play that attempts to present a fictionalized portrayal of what his life may have been like.”

The play takes place in the fall of 1587, which is the last time Shakespeare was recorded as living in Stratford.

The cast of over 20 students has been rehearsing since the beginning of March for the play, which Umland said is an emotional rollercoaster.

“You laugh, you cry, you go all over the place like a rollercoaster.”

“If you want to see a play that gives you action, laughter and heartbreaking pathos. It’s got it all. It’s got everything. The play is unique in that way,” Umland added.

For tickets, contact the Theatre Box Office at 308.865.8417 or boxoffice@unk.edu. Tickets are $8 for adults; $6 for non-UNK students, seniors and UNK faculty/staff; $5 per person for groups of 10 or more; and free for UNK students with a valid ID.