Peter Longo has put in 25 years of scholarship at UNK. He hopes he has 25 more to go. This professor’s blood is Loper blue. And he doesn’t want to stop learning, researching, collaborating, being inspired by others. He doubts that he’ll run out of research topics even in 25 more years.

Students and fellow faculty inspire him every day – it doesn’t matter the discipline. He can be intrigued by a discussion with a biologist, an accountant, a musician or artist. And want to collaborate with them on research projects to learn something new. “I’m a big fan of teamwork. And that’s the beauty of the place. When you stay 25 years you learn so much from students, from your colleagues,” Longo said.

Meandering. That’s his research path. Curving, bending, looping…as along the course of a stream or river. That metaphor pleases him.

Longo is a professor of political science at University of Nebraska at Kearney. He wrote the book, literally, on the Nebraska constitution.

How does Longo decide what he’s going to research next? Better yet, where does he get the energy to pursue so many topics? “The ideas come from a variety of sources,” he said. “I benefit from community, I collaborate. I like to work with students – I learn from them, they give me more than I do them. Of course, I learn much from my colleagues.

Indeed, he is intrigued by conversations with colleagues. He doesn’t care what discipline. Sometimes the further removed from political science, the more intrigued he is.

“To take what I do from my discipline overly serious would be a mistake… because it doesn’t reveal the dimensions provided by other disciplines. That’s the strength of UNK. We know biologists, we know chemists. That creates one of the best research environments for faculty and for students.”

Longo enjoys researching anything intriguing that he can learn to bring back to the classroom.

“(Research) should be related to our classroom teaching, our students, our own classroom development, and more thoughtful, more reflective,” he said.

Longo grew up in Bellevue and earned his bachelor’s degree in history at Creighton University. He went to UNL for his law degree and followed that up with a doctoral degree in political science. His first faculty position (1986) was at Benedictine College. That’s where he met one of his first research collaborators as a tenure-track faculty member. That collaborator remains a close personal friend, as are his other collaborators.

His mentor, the late Robert D. Miewald, urged Longo and his fellow doctoral candidates to not take themselves too seriously.

“He said, ‘just do your work.’ I never want to hold my research out as the definitive word. Research is an enjoyable side of doing the work. Being part of a community, exchanging ideas, and being purposeful and getting work accomplished, not taking ourselves too seriously is part of the research role,” Longo said. “We don’t know the answers, that’s why we do the research.”

Every step in Longo’s education led him to what he was really interested in: Learning more. He started as a history major.

“Liberal arts provide insights into the human condition. Ideally everyone should have at least an opportunity to minor in history, or disciplines such as political science, philosophy, English. I have a long-held interest of history but I also appreciate biology… That’s the strength of our research endeavors on our campus, the interdisciplinary research, summer research programs, and undergraduate student research programs.”

“That’s why I feel fortunate to have landed and stayed at UNK. You experience the rich diversity of students and colleagues; you see the kind and bright students who will be great citizens in their community.”

This May Longo took a handful of students on an honors seminar trip to research water policy in western and northern Nebraska.

“I just finished that honors course on environmental policy. We traveled to the Niobrara, Fort Halsey, (Lake) McConaughy, to the Platte River. It was driven by a grant, and I am hopeful the course will be continued to be taught with or without a grant.” Again, that research experience was more about sharing with the students and learning from others. There were profound campfire conversations.

“It’s easy to teach environmental policy in the classroom, you don’t get ticks. I picked up a nice tick in Halsey…The students knew more about living outdoors than me. They picked up lizards and snakes. They also had a keen understanding of environmental stewardship. I learned much from them.”

ABOUT HUMAN RIGHTS AND‘THE PERSON NEXT TO YOU’

Many of his research topics reflect his interest in civil and human rights and advocacy for the underrepresented. 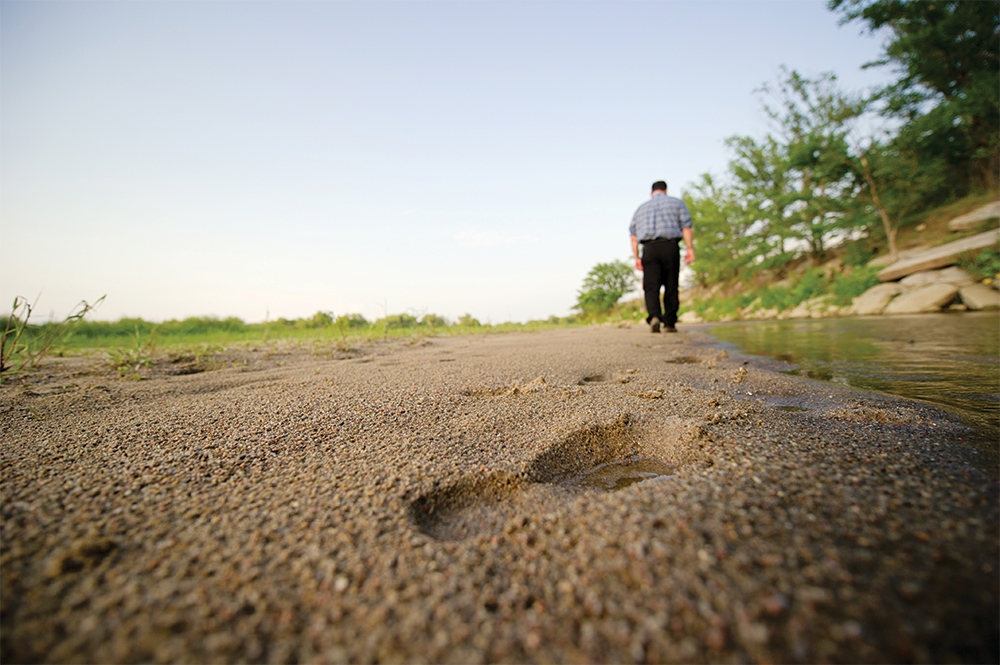 He examines religious rights, educational policy, environmental policy and many more topics. He and Professor Joan Blauwkamp won the Center for Great Plains 2012 Leslie Hewes Award for their article, “Workplace Religious Accommodation for Muslims and the Promise of State Constitutionalism,” published in the spring issue of Great Plains Research.

Longo said: “That’s what drives my research… I’m concerned when people get left out. I don’t like being left out. If there’s a good conversation I want to be included. I like to look at what happens when citizens are left out of governing decisions. Things like school consolidation, religion, comparative water policy. When you displace people, how did they get left out of that decision? Those aren’t distant entities, they could be the person next to you.”

Disagreements are inevitable, he said, but politics suggests that you do your best to say you involved everyone in the discussion.

On May 22, following the honors seminar excursion, he was in Rome presenting a paper to the United Nations’ Food and Ag Organization and the Global Awareness Society International Conference. He presented “Dam Water Policy in the U.S. and Italy” with Rick Cummings, the professor of accounting, his longtime friend and former colleague at Benedictine, now at University of Wisconsin-Whitewater. He calls that conference one of the highlights of his career. He also found new contacts for his next project, collaborating with his colleague Professor Satoshi Machida.

This spring he also co-chaired with Rick Edwards the annual Center for Great Plains Studies Symposium on “Gains and Losses from School Consolidation in the Great Plains,” in Kearney. The subject of school consolidation fascinates him because rural schools are a vital part of “the good life” and students bring their experiences to UNK and ultimately well beyond UNK. He said it was en excellent opportunity to learn from Edwards, director of the Center for Great Plains Studies and former UNL Senior Vice Chancellor for Academic Affairs.

Obviously, Longo already has lots of ideas and things going on. He’s working on a project with Machida looking at food and hunger from a global perspective. Another upcoming conference research project involves Blauwkamp on the “chicken coop policies and resulting controversies.”

“When I stop doing research it’s time for me to go. You’ve got to be part of the learning process and research is a key component of staying relevant.”

Sidebar: A guide to Nebraska’s constitution

Nebraska’s constitution is one of the oldest state constitutions in the U.S., but it has been amended 227 times at last count.

Longo, with Robert D. Miewald and Anthony Schutz, wrote the book on the topic.

The Nebraska State Constitution: A Reference Guide, (2009, University of Nebraska Press, second edition) is the only modern, comprehensive reference on the state constitution, including up-to-date information on case law and the latest constitutional amendments.

His co-authors are the late Robert Miewald – his mentor and dissertation adviser – and UNL law professor Anthony Schutz. The first edition was published in 1993, guided by Miewald; and Schutz did the majority of the work on the second edition, Longo said. “Anthony is a tremendous scholar,” he said. “I managed to sandwich myself between two of the smartest and kindest people I have ever known.”

The significance of the book is its subject, Longo said.

“The Nebraska Constitution is the social contract between Nebraska citizens and Nebraska government. The 1875 Constitution continues to shape the political life of the state.” Through continual amending: from the creation of the unicameral legislature to the changing role of education, “the story is told.”

The reference guide isn’t just for lawmakers, it’s for all concerned citizens, he said.