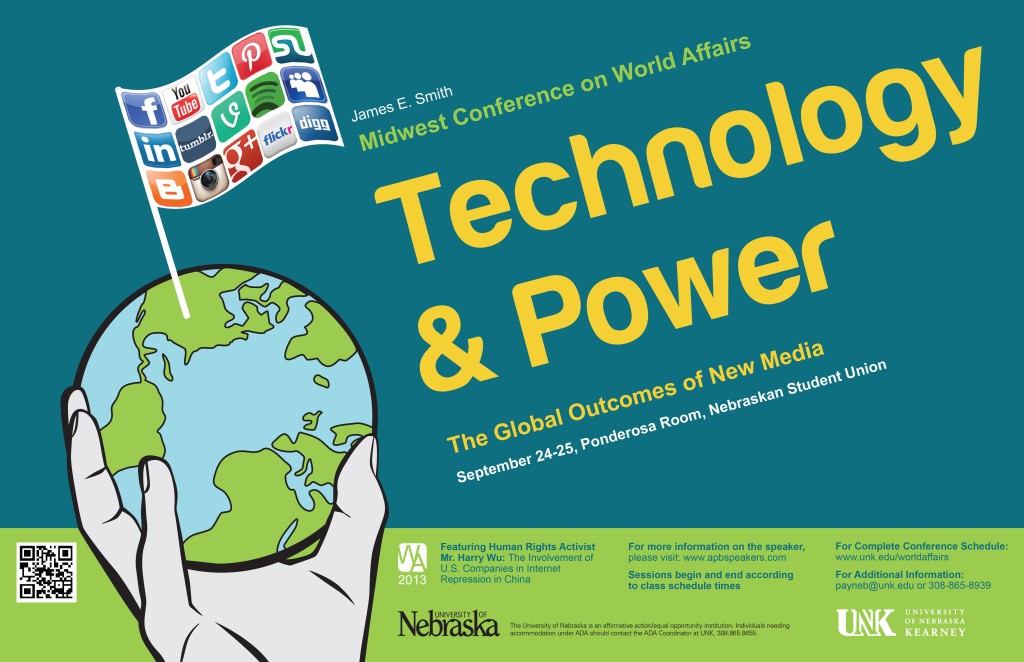 What: James E. Smith Midwest Conference on World Affairs
When: Sept. 24-25
Where: University of Nebraska at Kearney

Overview: The James E. Smith Midwest Conference on World Affairs serves as an opportunity for students to hear the opinions of leaders in the global community and to discuss current and pressing world issues. Through panel discussions, lectures and classroom presentations, participants are exposed to a variety of important issues and afforded the opportunity to interact with distinguished guests from all over the world.

Objectives: (1) introduce important global issues to students and the community; (2) expose conference participants to a variety of viewpoints from other countries; (3) promote global awareness.

KEARNEY – The University of Nebraska at Kearney is bringing the world to Nebraska.

Experts from across the world will discuss the role social media and the internet have on globalization during the James E. Smith Midwest Conference on World Affairs Sept. 24-25 in the Nebraskan Student Union Ponderosa Room.

This year’s conference, which is free and open to the public, features experts on internet censorship in China, social media and democratization in the Middle East and Africa, cybercrime, linguistics and internet and cyber-racism.

“It’s important that we understand what’s going on all over the world and begin to understand different countries and different cultures,” said Bonnie Payne, international education outreach coordinator and event organizer.

The conference aims to spark discussion about the globalization of the world, Payne said.

“Nebraska is connected and we need to care. People should not only come for one speaker, they should come for the entire event,” she said.

The theme of this year’s conference is “Technology and Power: The Global Outcomes of New Media.”

“We’ve been trying to focus on themes that are current, and themes that would be of particular interest to students,” Payne said. “Diplomats have been using new media for public diplomacy, and that’s been a game changer.”

At 9:30 a.m. Tuesday, the event will kick off with opening remarks from Student Body President Moses Moxey, an industrial distribution major from the Bahamas.

Harry Wu, a human rights activist and director of the China Information Center, will give the keynote address at 7:30 p.m. Tuesday. His presentation is titled, “The Involvement of U.S. Companies in Internet Repression in China.”

Wu spent 19 years incarcerated by the Chinese government. As a political prisoner, Wu survived beatings, torture and starvation. After his release in 1979, Wu moved to the United States and repeatedly risked his life returning to China to document slavery and human rights abuses. He was arrested in China in 1995, found guilty of stealing state secrets and sentenced to 15 years in prison. He was later expelled.

Recently, he has become a prominent voice in the struggle to oppose Chinese efforts to control the internet. In 2009, he provided testimony to the United States Congress on the state of global internet freedom.

Wu is the executive director of the Laogai Research Foundation, a nonprofit organization that exposes human rights abuses in China. He also heads the China Information Center, an online Chinese-language news and commentary website.

3:30 to 4:45 p.m. – BBC Documentary “How Facebook Changed the World: The Arab Spring,” followed by roundtable discussion. The story of how the Arab world erupted in revolution, as a new generation used the internet and social media to try to overthrow their hated leaders. Mishal Husain charts events in Tunisia and Egypt by meeting those who led the revolts and showing the unique footage they shot. Ponderosa E.

11:15 a.m. to 12:05 p.m. – TED Talk with Ethan Zuckerman, “Listening to Global Voices,” followed by roundtable discussion. The web connects the globe, but most of us end up hearing mainly from people just like ourselves. Blogger and technologist Ethan Zuckerman studies how the whole world uses new media to share information and moods across cultures, languages and platforms. He wants to help share the stories of the whole wide world and talks about clever strategies to open up your Twitter world and read the news in languages you don’t even know. Ponderosa E