KEARNEY – “To UNK and Beyond” is the theme for the 2013 University of Nebraska at Kearney Homecoming Week, Family Day and Band Day events, which are set for Monday through Friday. 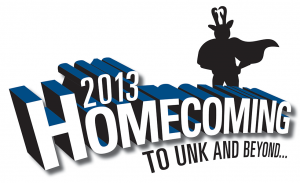 “Homecoming is important for so many people on and off campus. Alumni love coming back and seeing what’s changed on campus and seeing one other,” Wolf said. “For students, it’s become a really big competition that they start planning for during the summer. It’s a pretty exciting time.”

Each year, LPAC chooses a homecoming theme. This year’s superhero theme is meant to appeal to everyone involved in homecoming: students, alumni, athletics, faculty, staff and the community, Wolf said.

There will be events each day of Homecoming Week.

On Monday, a Lawn Display Competition will take place at 3 p.m. at residence halls and Greek houses. “It’s a good way to show the rest of campus that it’s homecoming week,” Wolf said.

Battle of the Brains is at 7 p.m. Monday on the Campus Greens.

A Canned Food Build will allow students to compete to create the best sculpture at 7 p.m. Wednesday on the Campus Greens.

Teams are given donations or purchase their own perishable food items to create structures based on the homecoming theme. Canned goods are then donated to area food banks. Last year, nearly 2,000 items were donated, Wolf said.

The Lip Sync Competition begins at 7 p.m., and Homecoming Royalty Crowning is at 9 p.m. Thursday at the Health and Sports Center.

The Lip Sync Competition, celebrating its 25th anniversary, will feature special performances by an a capella group. The group will also serve as the event’s master of ceremonies. Former LPAC members who started the competition will return to campus as special guests at the event.

On Friday, students will compete in an adventure race across campus beginning at 5:30 p.m.

The parade begins at 10 a.m. at the Museum of Nebraska Art and progresses south on Central Avenue before finishing at the West Co. parking lot at 923 W. Railroad St. Special Assistant to the Chancellor Jon McBride will serve as the grand marshal for the parade.

Area bands taking part in Band Day will then participate in the Bearcat Marching Festival, which begins at 1 p.m. at Kearney High School.

The homecoming football game against Missouri Western State University kicks off at 3 p.m. at Foster Field.

Homecoming royalty will be honored at halftime of the football game. Other halftime activities include recognition of new inductees into the UNK Athletic Hall of Fame, Band Day parade awards and announcement of homecoming sweepstakes winners. The UNK Sapphire Dance team and UNK Pride of the Plains marching band will also perform.