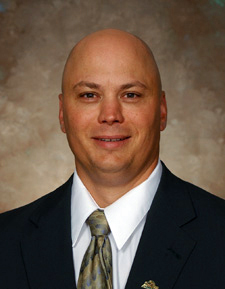 The community will have the opportunity to meet Dr. Rick Goeb, the first of four finalists for the University of Nebraska at Kearney athletics director position, on July 22. A campus community and media forum is scheduled at 11 a.m. in the Ponderosa Room at the Nebraskan Student Union. A community forum open to the public will begin at 5 p.m. at the UNK Alumni House.

Goeb served as director of athletics at Bemidji State University (Division II) from 2001-2013. He has prior experience as senior associate athletic director at the University of Alaska Fairbanks (1995-2001) and head wrestling coach at St. Cloud State (1990-93).

Goeb also played a key role in transitioning Bemidji State’s hockey teams from Division II to Division I, which included the construction of the $75 million, 4,500-seat Sanford Center ice arena.

Remaining athletics director candidates also will attend community forums during their campus visits, with those dates and times announced at a later date. The forums are being arranged to enable the campus and Kearney community to meet the candidates and give input.