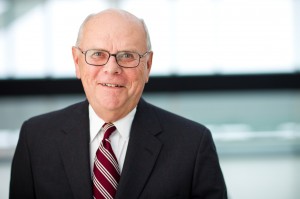 Kearney, Neb., May 1, 2013 — The 2013 Distinguished Alumni Achievement Award will be presented to Kenneth W. Kroeker during the University of Nebraska at Kearney College of Business and Technology Honors Night on May 2.

Kroeker is Chairman and CEO of Lawson Kroeker Investment Management Inc., an Omaha-based firm, which he co-founded in 1986. The company manages assets of high-net-worth individuals, foundations and endowments. Measured by assets under management, Lawson Kroeker is one of the largest Securities and Exchange Commission-registered, independent investment advisers in Nebraska.

Prior to co-founding Lawson Kroeker, Kroeker began his investment career in the Trust Investment Department at Omaha National Bank/FirsTier Bank in 1969, and served as department chairman for nine years.  He received his Chartered Financial Analyst designation in 1974 and served on the board of directors of the Omaha-Lincoln Financial Analysts Society (now CFA Society of Nebraska) from 1976-1984 and as its president in 1982-1983.

Kroeker is a 1961 graduate of Nebraska State Teachers College/UNK, earning a bachelor’s degree in education with emphases in accounting and economics. In 1969, he earned a master’s degree in finance and accounting from the University of Nebraska-Lincoln after teaching high school business courses for a few years.

During his career, Kroeker has been actively involved in various professional and civic organizations such as the Association for Investment Management and Research (now the CFA Institute), Cooper Village Board of Directors, Downtown Omaha Rotary, Downtown Rotary Foundation Board, Free Enterprise Award Committee, Greater Omaha Chamber of Commerce, serving as West Council Chairman in 2004.

Kenneth Kroeker and his wife Victoria Nemecek Kroeker, a retired accountant, reside in Omaha. Victoria is also a graduate of KSC/UNK and the University of Nebraska-Lincoln. They have a daughter who works in securities compliance and regulation in the finance industry in New York.

A plaque honoring Kroeker has been placed in the West Center Building on the UNK campus along with 2012 recipient Dennis Nelson, Buckle CEO.