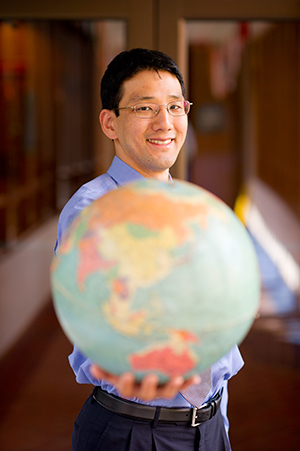 In a second floor office in Founders Hall, Satoshi Machida’s view out his window is east down 25th Street, but as he does research, prepares for classes and talks to students, it’s clear that his vision goes well beyond his view.

His vision is global. Bookcases along the wall hold a scattering of books, along with bulging manila folders, stacked side-by-side and shelf-to-shelf with his research.

Globalization is at the center of his work, which has included the effects of globalization on people’s cultural, economic and political views, and even on issues related to HIV/AIDS, trust and peace.

Using key data sources such as Ronald Inglehart’s World Values Survey and the Pew Research Center, he searches for trends, asks questions and looks at the many ways globalization affects the world.

Machida, an assistant professor of political science, defines global­ization as “…the increasing layers of interdependence among countries.”

In a 2009 article published in International Studies, Machida ex­amined how globalization affects the legitimacy of intergovernmental organizations (IGOs). He found that globalization does not undermine the legitimacy of IGOs in democratically well-attuned rich states.  For that study, he used data from the Pew Global Attitudes Project.

His study of IGOs, titled “Democratic Deficit? Globalization and Citizens’ Support for IGOs,” was also the subject of a 2009 presentation at the Western Social Science Association Conference in Albuquerque, N.M.

He used the Pew Global Attitudes Project for another study of “Globalization and Citizens’ Support for Global Capitalism: Multi- Level Analyses from the World-Systems Perspective,” published in 2011 in the Journal of Developing Societies.

Machida presented a paper on the study at the 2009 Pacific Northwest Political Science Association meetings in Victoria, British Columbia, Canada.

“I always find something new,” Machida said. “Globalization is very important to look at. It is changing lives drastically. The impacts of globalization can be seen in almost all aspects of human life.”

He pointed to another scholar’s definition of globalization: “Globalization can be thought of as the widening, intensifying, speeding up and growing impact of worldwide interconnectedness.”

In a recent publication, Machida cited examples of “inter­connectedness” from another study that included, among other things, “…the interpenetration of industries across borders, the spread of financial markets, the diffusion of identical consumer goods to distant countries…”

“Borders between countries don’t mean as much as they used to,” Machida said. “People can move across borders, and that creates more opportunities for commerce and cultural exchanges.”

Globalization is reflected in world economies, trade and immigration.

“Nebraska traditionally is homogeneous, but that no longer is true in cities where Hispanics and people of other cultures have moved for jobs,” he said.

His most recent research looked at whether globalization rendered people more ethnocentric, which he said is the idea by some that they are superior to others. Machida said that is why some people want to defend their places against immigration.

The study, “Does Globalization Render People More Ethnocentric? Globalization and People’s Views on Cultures,” was published in the American Journal of Economics and Sociology. Responses to the following two statements were among those he included in his study: “Our people are not perfect, but our culture is superior to others,” and “Our way of life needs to be protected against foreign influence.”

“My finding was that as people are exposed to more diversity, they are less prone to be ethnocentric,” he said.

“In many ways, the world is smaller, but that doesn’t mean that the world is one now. People are just moving more,” he said.

Machida noted that, because of globalization, “There are winners and losers economically. Some countries are core—the U.S., Japan and other western countries—and they benefit from globalization, because they can make money.

“Globalization provides a lot of opportunities, but it has to be managed very carefully to help poor people,” he said.

His compassion for the less fortunate grew out of a 1997 study abroad experience. That year, he traveled to Nepal with The Society for Promoting Inter-Cultural Education for Children (SPIEC).

He and others in the group walked two days along rugged mountain paths to reach the village of Nangi. There he met Mahabir Pun, a Nepalese teacher known for his work using wireless technolo­gies to connect Nangi to the global village, work that earned Pun the Magsaysay Award, considered by many to be the Nobel Prize of Asia.

“The experience in Nepal was important in my life,” Machida said. “Very intense experience. I knew then that I did not want to work for a big company.” He would not be following his father’s footsteps into the Japanese corporate world.

Little did he know that a decade later he would begin his career as a university profes­sor on the UNK campus–the same campus where Pun earned his bachelor’s and master’s degrees.

Although Machida did not return to Nepal, he did further volunteer work in The Society for Promotion of Youths and Masses in India in 1999 and 2000.

He went on to attend Waseda University in Tokyo for his under­graduate degree in political science. A year as an exchange student at Earlham College in Richmond, Ind., would further change his life.

“I thought it (the U.S.) was such a good country, where I could be myself,” he said, explaining that in Japan, there is pressure for people to act in the same manner and say the right things.

“I hope to make contributions through my work and talking with students,” Machida said. “My personal experiences drive my research. I try to bring a new perspective (to the research).”

In and out of the classroom, he brings the world to his students. He mentors student research projects and serves as the faculty adviser to the Model United Nations, an organization for stu­dents in which they do background work on the issues facing the United Nations and then take a position on an issue and develop possible solutions.

Each spring, Machida takes the group to the Harvard National Model United Nations where they role play situations at the United Nations. The group researches the position they will be playing and practices simulating the international negotiations.

Of the various sites that host Model UN events, the Harvard National Model United Nations is “the biggest one in the world,” according to Machida. He helps students promote the UNK organi­zation and assists with fund-raising to support the students’ annual trip to the Harvard competition.

“The organization (UNK Model UN) is very popular among students,” he said. “It is good to see the students grow.”

“The process of trying to answer these questions may not be easy, but it is rewarding when I see students making progress in their research projects. My job is to teach students how to conduct research in political science. I am so happy when students tell me that they would like to explore more issues in the world. That’s when I know I did a good job in guiding students in a right direction.”

And what is next on his research list? Several topics, including immigration. As an immigrant, himself, Machida said, “It’s about my life, and my family’s life, too.”

“Immigration is changing Kearney (and the world). I can see it,” Machida said.