A new memorial scholarship provides support to students in the College of Business and Technology at the University of Nebraska at Kearney while remembering the life of alumnus Dr. Keith N. Bennett. 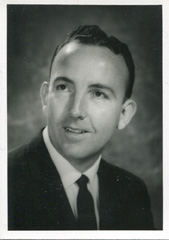 The Bennett family established the Dr. Keith N. Bennett Memorial Scholarship with a gift of $50,000 to the University of Nebraska Foundation. The permanently endowed fund enables the College of Business and Technology to award scholarships annually to help students with financial need.

Keith’s wife, Erma Bennett, who lives in Indianapolis, said the scholarship is a way to give back and show appreciation for the assistance she and her husband received.

“When my husband and I went to school, he worked summers in Kansas harvesting to earn money, but we each had a scholarship,” Erma Bennett said. “Had we not had that scholarship, we never would have gone to college. It’s just giving back for what we got when we went to school.”

At the time, Erma said she made around $15 per month working at the National Youth Administration, while tuition cost 50 cents an hour. Had it not been for her $150 scholarship, she wouldn’t have been able to afford college, she said.

“I do feel very appreciative of what was done for me, because if I hadn’t had any help, I couldn’t have gone to school,” Bennett said. “It gives you so much more courage and strength.”

Candidates for the scholarship may study any major in the College of Business and Technology and have a sophomore or above class standing.

The gift of this scholarship also supports the university’s current fundraising initiative, the Campaign for Nebraska: Unlimited Possibilities, and its goal to raise $50 million for UNK campus priorities, including support for students, faculty, academic programs and facilities.

After serving in the U.S. Army during the 1940s, Keith Bennett returned to Nebraska and earned a bachelor’s degree at Kearney State in 1950. Keith and Erma then spent five years in Omaha where he taught. The couple then moved to Miami where Keith earned a master’s degree in school administration and the couple welcomed their only child, Beth Ann.

Over his 36 year career as an educator, Bennett was an administrator, teacher and mentor. His dedication to the field of education earned him numerous awards and honors, including the Phi Delta Kappa “Man of the Year” award at the University of Miami. He was also elected into the Florida Adult Education Hall of Fame.

The University of Nebraska Foundation is an independent, nonprofit organization that has connected the dreams and passions of donors to the mission of the university for more than 75 years. In 2011, donors gave a record $172 million in gifts for scholarships, academic programs, medical research and other priorities at the university. The foundation’s current fundraising initiative, the Campaign for Nebraska: Unlimited Possibilities, concludes in 2014. For more information, visit nufoundation.org.