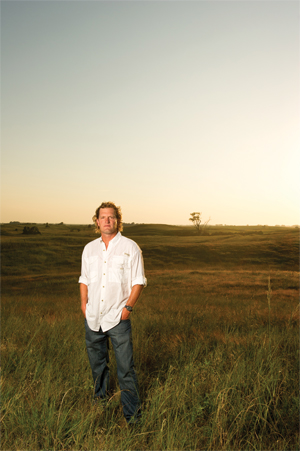 Gunfighters face off in a dusty street, each ready to make the other eat lead because the town isn’t big enough for both of them. Sunlight flashes off the steel of their pistols. Smoke rises from both barrels, but one now lies in the limp hand of a dead man. That was justice in the Old West.

At least that is the image Mark Ellis, like most of America, grew up with. His research, however, is helping to reshape the lawless reputation of the American frontier. The history professor has shown that while the West may have been wild, it was also a place where people made, enforced and valued the law.

In 2007, Ellis published Law and Order in Buffalo Bill’s Country, Legal Culture and Community in Lincoln County, Nebraska, 1868-1910. The book focuses on North Platte and the trial of John Burley, who was convicted of manslaughter in 1869. As he writes in the conclusion of
the book, Ellis found through this case that “19th century plains settlers created an environment where law and order rather than lawlessness prevailed, even in the wild and woolly climes of Buffalo Bill’s country.”

The book took second place in the Scribes Book Award from the Legal Writers of America, and was a finalist for the Great Plains Distinguished Book Prize. Ellis said the book builds on the research of other historians, but “takes a different path” in focusing on
the establishment of legal system in a western community. The only book with a similar focus, he said, shows how law was applied on the Oregon Trail.

While Law and Order was Ellis’ first book of academic research, his career has been marked by frequent publications on a variety of subjects. His article in the Summer 2005 issue of Western Historical Quarterly, which also analyzed the Burley case, was nominated for three national awards. He has written dozens of articles and essays, is active as a reviewer and edited the Buffalo County Historical Society’s newsletter, Buffalo Tales, from 2002-2006. He has written two local history books with UNK students, A Century of Sports at the University of Nebraska at Kearney with Jordan Kuck, who is now a Ph.D. student at the University of Tennessee and currently on a Fulbright Fellowship in Latvia, and Kearney with Heather Stauffer, who is now a graduate student in English at the University of Nebraska-Lincoln. Those publications, and the many graduate student projects he has mentored, earned Ellis the UNK Outstanding Faculty Mentor Award and the Graduate Studies Faculty Mentor Award in 2009.

Two books, including one that builds on his Law and Order research, are upcoming. Ellis said his research has slowed because of his duties as graduate chair and as the director of the online graduate program in history.

Ellis defines himself as a local historian, focusing on the history of the area in which he lives. Growing up in southern California, his ideas of the West were formed by popular movies and books that featured gunfights and quick draw artists. Later, at California State University, Northridge his mentors included Roger McGrath and Clare McKanna, who documented the high levels of homicide in several 19th century western communities.

When Ellis came to Nebraska to earn his doctorate degree, he thought he would find the same lawless atmosphere pervaded this part of the West.

“When I began the project, I was actually going to confirm that image,” he said. “The deeper I got into the research, the more I found that was not the case.” Part of his research was done with records housed in the attic of the Lincoln County (Nebraska) Courthouse. Although many of the records had been damaged by vermin, fires and the passing of time, it was still an exciting experience for the historian, seeing and holding papers no one had seen or held since the late 1860s.

What Ellis found in the Burley case was a community committed to seeing legal justice done. While the murder itself may sound like something out of a B western – a man shows his buddies the money he has saved to buy a wagon and mules, and one of them shoots him in the head to get it – what followed definitely went off script.

Burley’s lawyer argued for and got a change of venue for the trial, because there were too few people in the area for an adequate jury pool. Burley was convicted of murder and given the death penalty, but the Nebraska Supreme Court reversed the conviction. By the time Burley was retried and convicted of manslaughter, Lincoln County had built a jail and had enough residents to put together a jury of his peers. 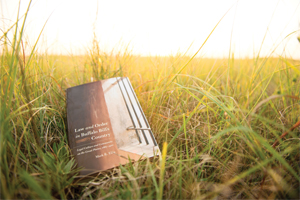 None of what happened in the Burley case, Ellis is quick to point out, contradicts the fact gunfights, vigilante mobs and “frontier justice” happened in the American West. His work simply shows that the people who settled the frontier brought the concept of legal justice with them, and applied it.

Ellis wrote about the Burley case in his doctoral dissertation, and developed his work into a book after coming to UNK in 2000.

Since 2008, Ellis has juggled his own research with his role as director of the online master’s degree program. More than half of the online students are teachers from all over the world. They are seeking advanced education, and they participate in classes. One of Ellis’ students e-mailed to say his assignment would be late, since he would be flying a mission over Afghanistan on the day it was due. That, Ellis said, was a good reason for an extension.

The success of the program has helped support bringing in two visiting professors–one from the University of Nebraska – Lincoln and one from Texas Tech University–who offered classes last fall about 19th and 20th century Europe.

While exciting, Ellis said, the success of the program has also meant less time for the two books he has in process. One of them, co-authored with Vern Volpe, chair of the UNK Department of History, will look at the impact of World War II on Nebraska. Ellis said the book is an outgrowth of the Veterans Research Project, a Library of Congress effort to collect veterans’ stories. The UNK history department has participated in the project since 2004. He added, though, that he has been interested in military history since he was a kid, when both his grandfathers told him stories about fighting in World War II. Nebraska has an especially intriguing story related to that time period, Ellis said, because the war experience transformed the state so dramatically.

“This part of the country was isolationist until Dec. 7, 1941,” Ellis said. “Overnight, this becomes one of the most involved and patriotic of places.”

While the book is still in its early phase, Ellis said it marks a new research focus, on the 20th century for him. He plans at least one more look, however, on the legal system of the West.

Ellis said there are many ways his findings in Law and Order can be expanded, and he intends to do that in a book titled The Cowboy Menace. It will explore the central plains conflict of the 1870s between small town settlers and the cattle drives that came up from Texas. Far from a simple case of “farmers vs. cowmen,” the conflict was a clash of values, economics, lifestyles and priorities.

The middle-class tradespeople and farmers in the small towns along the rail lines were mostly northerners, many of whom had fought for the Union in the Civil War. The people driving cattle through a shrinking “free range” were mostly southerners, and supporters of the Confederacy who “tended to lean toward a ‘We’ll handle these matters ourselves,’ kind of attitude, while the northern tendency was to turn toward the law. There was a conflict of values, not just economics,” Ellis said.

That conflict led people to subvert or ignore the law at times. Ellis said by looking at some of those incidents, he wants to help reveal a more complex and more accurate picture of the American West. It was a wild and woolly place, a place of conflicting values and shifting ideas where law and order finally won out.