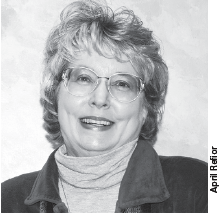 Janet Stoeger Wilke, who has served as both an associate dean and the interim dean of Calvin T. Ryan Library, has been named dean, effective Monday, March 12, pending final approval by the Board of Regents.

“Based on recommendations from the search committee, and my own experience, we feel she is the best person for the job,” said Dr. Finnie Murray, senior vice chancellor for Academic

Affairs/Student Life. “Janet has demonstrated her administrative ability as an interim dean for the past year, and she had a previous year as interim dean in 2003-2004.

I feel very good about her capacity as dean.” Wilke has served as interim dean since June of 2006. She served an earlier term as interim director of the library in 2003, and was responsible for the staffing, budgeting, planning and evaluation of library services and personnel.

A member of the library faculty since 1998, Wilke joined the UNK community as a reference librarian. Since that time, she has also served as head of the curriculum/non-book department and director of the Regional Instructional Materials Review Center, and assisted with the direction of the library as an associate dean.

Before joining the Calvin T. Ryan Library, Wilke was an assistant professor and education librarian at Wichita (Kansas) State University, as well as a librarian and project assistant at the Center for Limnology in Madison, Wis., and the Trout Lake Research Center at the University of Wisconsin.

Wilke began her employment in higher education at Doane College, where she served as a library media specialist, assistant director and acting director of the Perkins Library.

In addition to her work at UNK, Wilke is the chair of the Kearney Chamber of Commerce Business/Youth/Education Committee. She is also involved as a member of the Kearney Public Schools Strategic Planning Task Force.

Wilke’s scholarly work can be found in several publications, including In Brief, NLAQ and Information Technology and Libraries.