KEARNEY – Alecia Amezcua made sure her daughter Ariana was in attendance last Thursday as she walked across the stage to receive her master’s degree in Spanish education.

After everything they’ve been through, there was no way Amezcua was going to celebrate the achievement without her.

“She’s a lot stronger than I am,” Amezcua said. “She’s the one who kept me going.”

The past nine years have been anything but easy for Amezcua and her daughter, who has undergone four brain surgeries to remove a tumor that was causing severe epilepsy. The first two surgeries occurred in 2012, when Ariana was just 7, and she began experiencing seizures again in 2015.

Amezcua started the University of Nebraska at Kearney’s online master’s program in Spanish education in January 2014, but was forced to put her educational plans on the back burner following her daughter’s relapse. 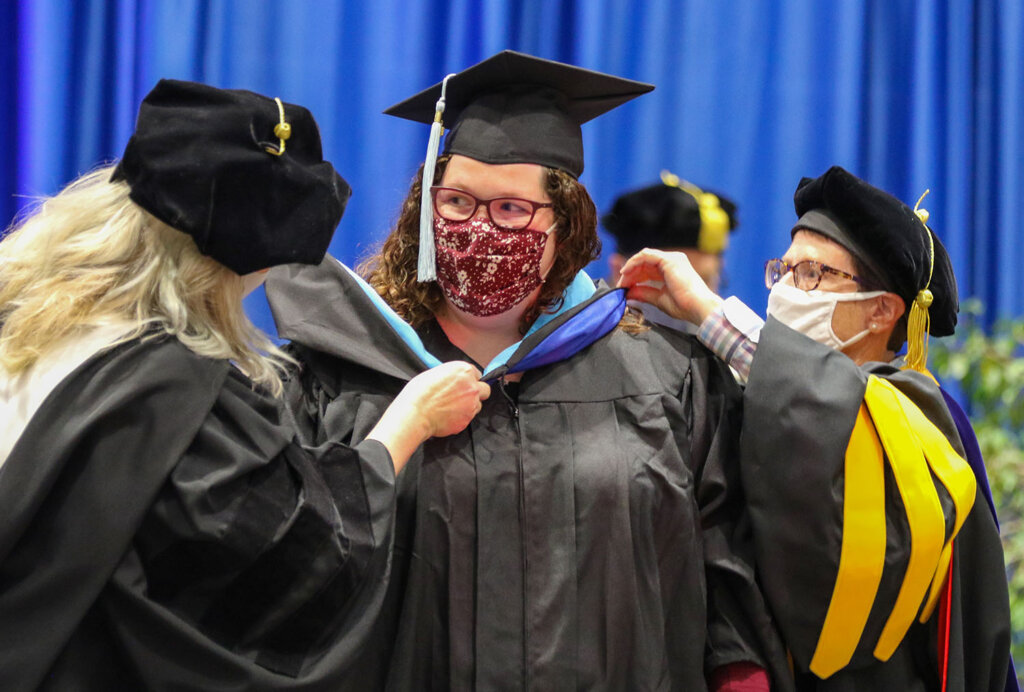 “She couldn’t go to school full time and I was trying to work full time while also home schooling her through the district,” said Amezcua, who is in her eighth year teaching Spanish at Norfolk High School.

The single mother from Madison stopped pursuing her master’s degree so she could care for her daughter, who had her final two surgeries in 2017.

“Once I knew she was OK, I started taking classes again in 2019,” said Amezcua, noting that Ariana’s “resilient attitude” helped her get through the tough times.

“It was really hard to juggle it all, but I learned so much and it’s helping me with my own career,” she added. “That’s why I kept going, because it really has helped me be a better teacher.”

Amezcua chose the UNK program because she could complete her degree entirely online and she “heard some really good things about it.” In addition to enhancing her Spanish skills and classroom instruction, a master’s degree boosts her salary and allows her to teach dual-credit courses through Northeast Community College.

She also hopes it shows Ariana, now a sophomore at Norfolk High School, how important higher education is. The 15-year-old was seated alongside her grandmother and step-grandfather during Thursday’s commencement ceremony – a moment that felt “unreal” for Amezcua.

“It’s still not quite hit me yet,” Amezcua said. “I think it’s awesome that I get to show people what happens when you work for something that may be more difficult, but you just keep on going.”