KEARNEY – A little rain wasn’t going to dampen this party.

Stormy skies didn’t stop hundreds of University of Nebraska at Kearney students from heading downtown Thursday for a fun-filled evening on “The Bricks.”

Although a couple of brief downpours altered portions of the annual Destination Downtown event, Lopers still had a good time while celebrating the start of a new academic year.

“It’s just nice to meet your friends and enjoy the atmosphere,” UNK junior Zerron Schroder said as he stood under an awning while waiting for the rain to clear. “It’s a pretty cool event.”

Schroder, a criminal justice major, had already scored free pizza from Domino’s, and he was ready to check out other Kearney businesses when the clouds parted and the sun reappeared.

The Sumner native called Kearney a welcoming community with plenty to offer.

“I feel like Kearney has a pretty wide range of activities and events for students,” he said.

Organized by UNK’s First Year Program, Destination Downtown introduces Lopers to a variety of businesses and organizations by getting them off campus and into the community. The free event features food, games, product giveaways and prizes, discounts at downtown businesses and a concert from Lemon Fresh Day, which was moved indoors to Cunningham’s Journal because of the wet weather.

Jayden Henry, a sophomore from Omaha, was among the many UNK students taking advantage of a deal at Bread N’ Butter Tattoo along Central Avenue.

The criminal justice major walked out with a new double heart tattoo, upping her ink count to five.

“I thought it was cute,” she said of the design.

Henry, attending her second Destination Downtown, said she enjoys meeting fellow Lopers and hanging out at the concert during the event.

“It’s a lot of fun. Everyone is super nice here,” she said. “It’s nice that UNK brings everyone together to do something like this.”

For UNK freshmen Avril Jones and Megan Kinzle, there was another reason to celebrate before the night was over. They won a skydiving trip donated by Skydive Atlas of Holdrege after the eating contest was interrupted by a passing storm.

“We were the only ones who showed up, so we won by default,” said Jones, who was certain her appetite and daylong fast would have carried the team to victory either way.

“I eat food like it’s my job,” she proclaimed.

The molecular biology major from Aurora declared Thursday to be “the best day of my life” while celebrating with a cupcake fight.

“Oh my gosh, I love skydiving so much,” she said with frosting covering her face. “I went for my 18th birthday.”

Kinzle, a criminal justice major from Wahoo, wasn’t quite as excited.

“I might have to literally force her off the plane,” replied Jones, who plans to join the Air Force.

Fun and games aside, the event served an important purpose for the businesses involved.

GIX Logistics, a third-party logistics company located in Grand Island, sets up a table every year to connect with UNK students and talk to them about potential employment opportunities.

“We spend a lot of time on campus, so this is kind of the kickoff of our recruiting season,” said talent acquisition and culture coordinator Bailee Knott.

GIX Logistics teams with the Sigma Phi Epsilon fraternity to sponsor the Destination Downtown concert, and the company is one of UNK’s industry partners.

Knott, who graduated from UNK in 2016, called the university a “very important” asset for the business. About 80% of the company’s interns come from UNK, she said, and most of those students will transition to full-time positions with GIX.

“So we have a lot of Lopers in the office,” Knott noted.

Justin Kluver, store manager at Yandas Music and Pro Audio, also takes notice when UNK students are back in town.

“It absolutely has an impact on the businesses downtown,” he said. “And I think every year we develop a better relationship as a downtown community with the campus community.”

Kluver was happy to see all the Lopers walking through the door Thursday evening, and he hopes they continue to frequent The Bricks throughout their time at UNK.

“It’s really cool because almost everyone who came in here tonight is someone who has never been here before,” Kluver said. “We want students to experience the vibrant downtown community we have here in Kearney. There are a lot of awesome businesses down here.” 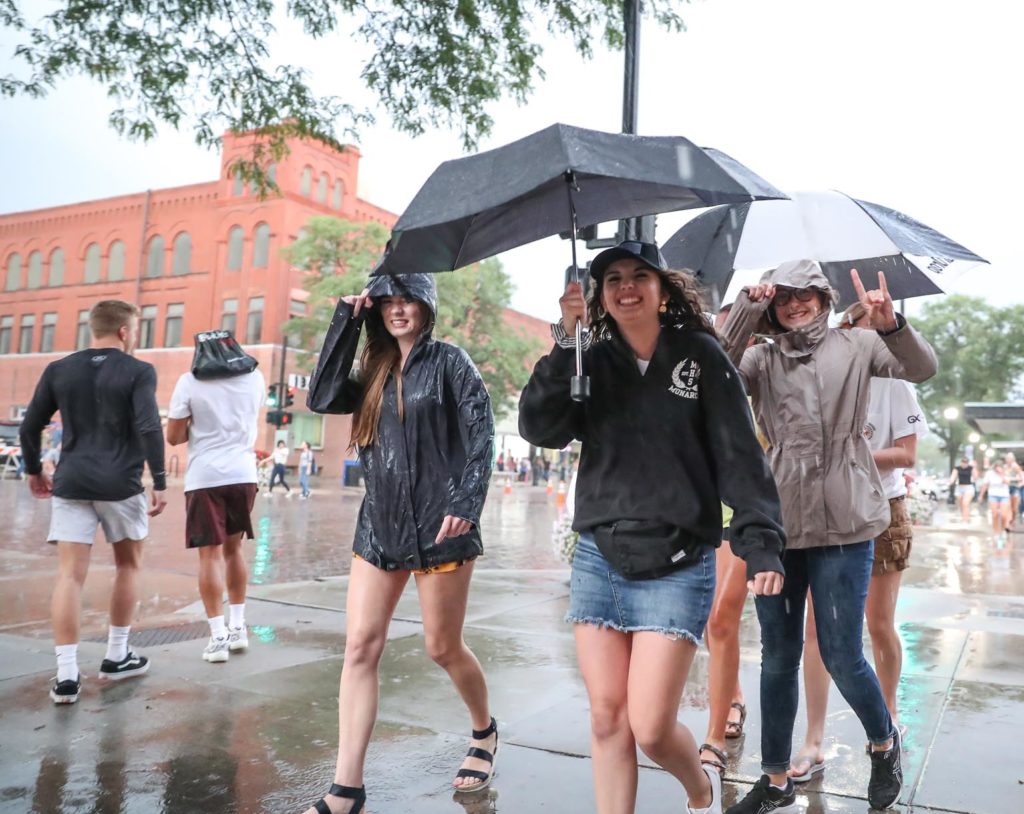 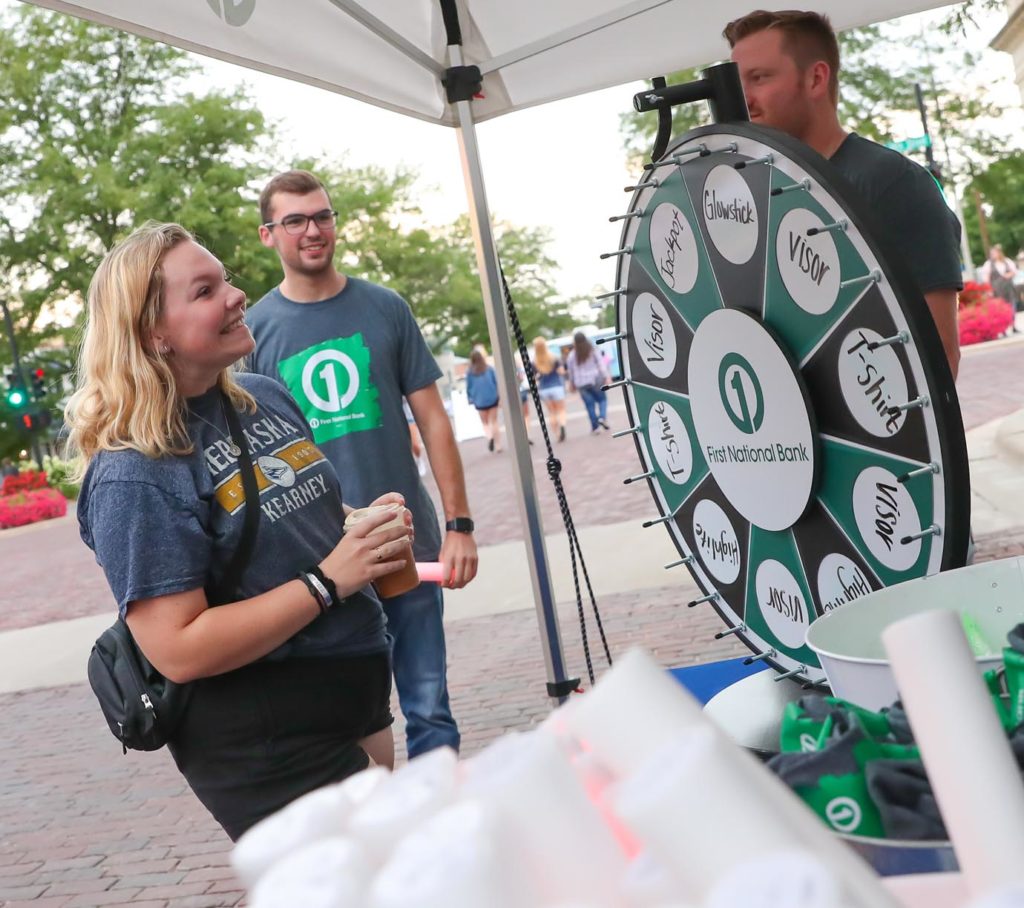 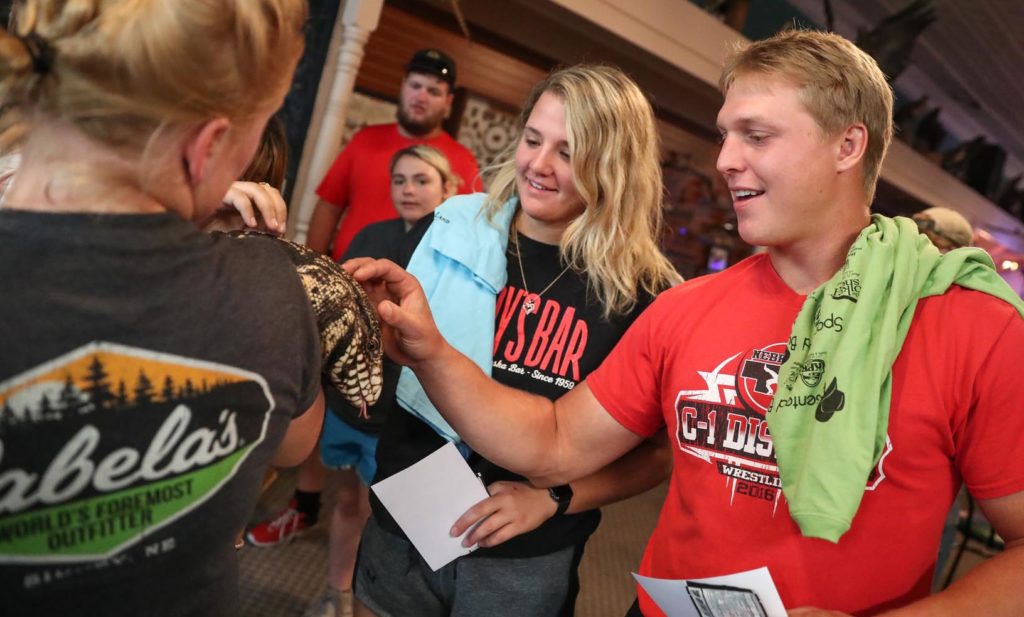