When Melissa Wuellner takes her daughter Lily fishing, they aren’t too concerned about the size of their catch.

Small bluegill, crappie and bass are enough to excite the 8-year-old.

“More than anything, what she really likes is seeing the fish nibble on her worm,” Wuellner says with a smile.

For Wuellner, an associate biology professor at the University of Nebraska at Kearney, these trips aren’t about landing a trophy fish to display on the wall. She’s happy making memories with her daughter while passing along her passion for the outdoors.

“I’m hoping that we can kind of grow together in fishing and we can try new things together,” Wuellner said. “It’s definitely brought more meaning to my career to share that with her.”

As a fisheries biologist – or “fish doctor” if you ask Lily – Wuellner works with the Nebraska Game and Parks Commission and South Dakota Department of Game, Fish and Parks to ensure these experiences are available for anglers of all ages. She provides the information these agencies need to effectively manage public waters and fisheries in the two states.

“They’re managing these fisheries based on science, and there’s a lot more science to it than people realize,” said Wuellner, an Illinois native who holds a doctorate in wildlife and fisheries science from South Dakota State University, where she taught for seven years before joining the UNK faculty in fall 2017.

There’s also a lot of pressure to get things right, because a nibble here and there won’t satisfy everyone. 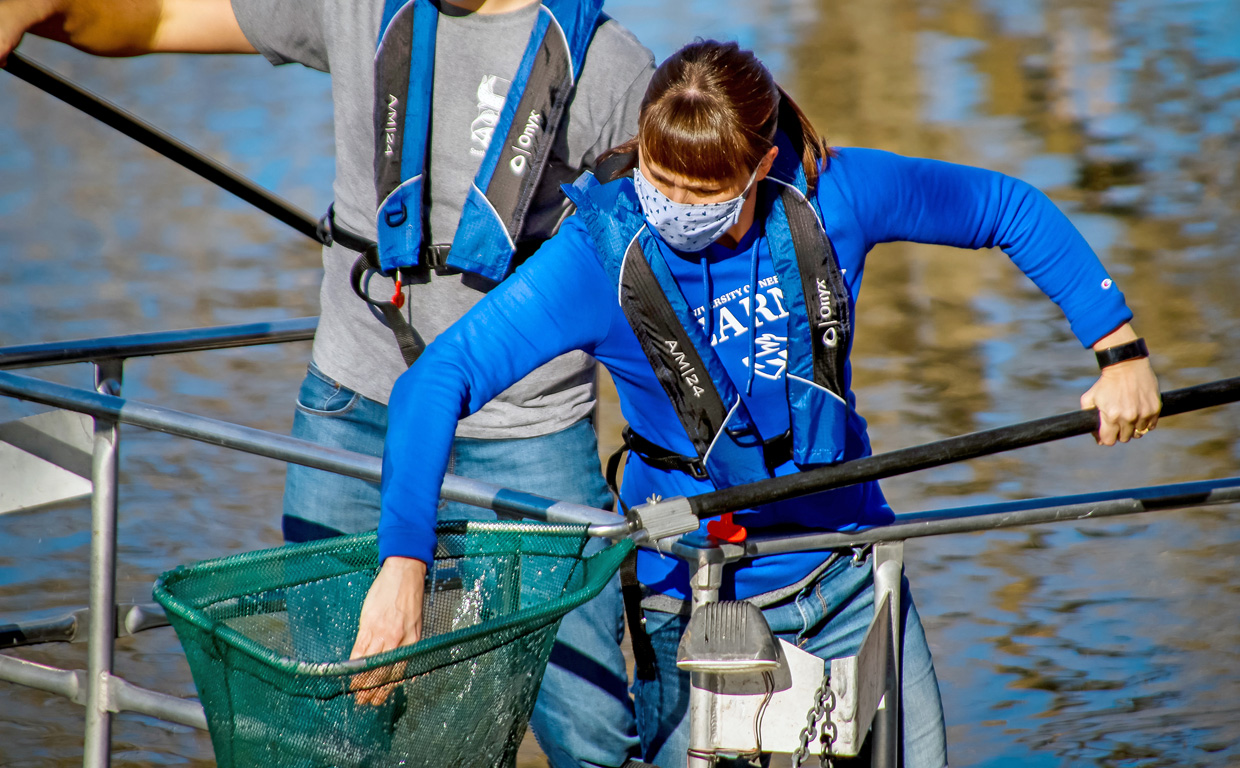 At 30,000 surface acres, Lake McConaughy near Ogallala is Nebraska’s largest reservoir and its most popular fishing destination, luring anglers from states across the region.

Walleye and white bass, two sought-after species, are stocked annually by the Game and Parks Commission, which turns to Wuellner for assistance.

“That’s a huge investment the state makes, and they want to know that what they’re doing has a good return,” she said. “Ultimately, that return on investment is getting fish to the harvestable size anglers want to catch.”

A major obstacle when stocking young fish is predation. “We don’t want them to be eaten right away,” Wuellner notes.

So, it’s critical to find stocking locations where a food source is easily accessible, and predators are in short supply. 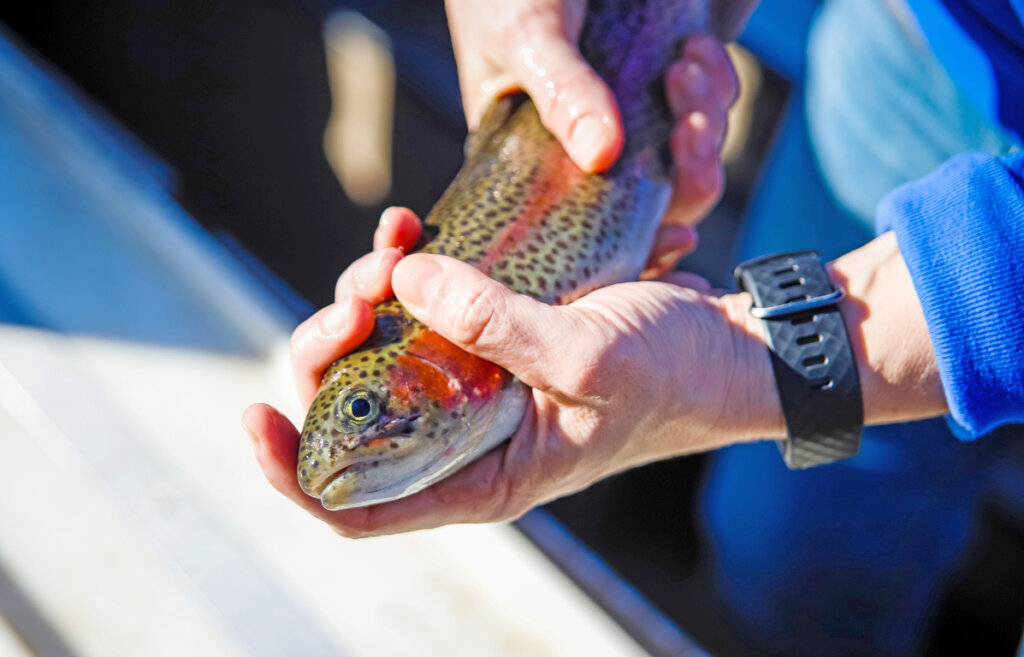 By studying characteristics such as bank slope, water clarity and zooplankton concentration, Wuellner and her students can identify the areas where fish should or shouldn’t be stocked. They also look at the stomach content of predator fish to determine which species are eating the walleye and white bass within the first 20 hours.

“Even something as simple as wind can make it difficult to stock a specific location on any given day,” Wuellner explained.

Wuellner is using the data they collect to create “heat maps” that will help the Game and Parks Commission decide where to stock fish.

Another Lake McConaughy project takes a closer look at the natural reproduction of white bass to determine where these fish are spawning.

Similar to aging a tree, these fish have pairs of inner ear bones that grow rings over time, creating a record of the fish’s entire life. Using a technique called otolith microchemistry, researchers can track where a fish has been by comparing the concentrations of various elements and isotopes in these bones to those in the water.

The challenge, though, is that the water chemistry changes frequently.

“We’re trying to find the needle in the haystack,” said Wuellner, who is working on the project with graduate student Thyme Cooke of Cheyenne, Wyoming. “Every year is telling us a slightly different story, and we’re hoping to build this larger library of different chemistry signatures.”

If they can identify the bass’ spawning ground – whether it’s somewhere in the reservoir or in the North Platte River above Kingsley Dam – the Game and Parks Commission can focus on removing any barriers to this location or creating new spawning sites through habitat restoration.

“If we have high enough natural production, we may not always need the hatcheries to provide additional fish. The hatcheries can then work to meet other stocking demands across the state,” Wuellner said.

Wuellner and her students cast a net that extends far beyond Lake McConaughy.

Their artificial habitat research has the potential to impact reservoirs across the country. 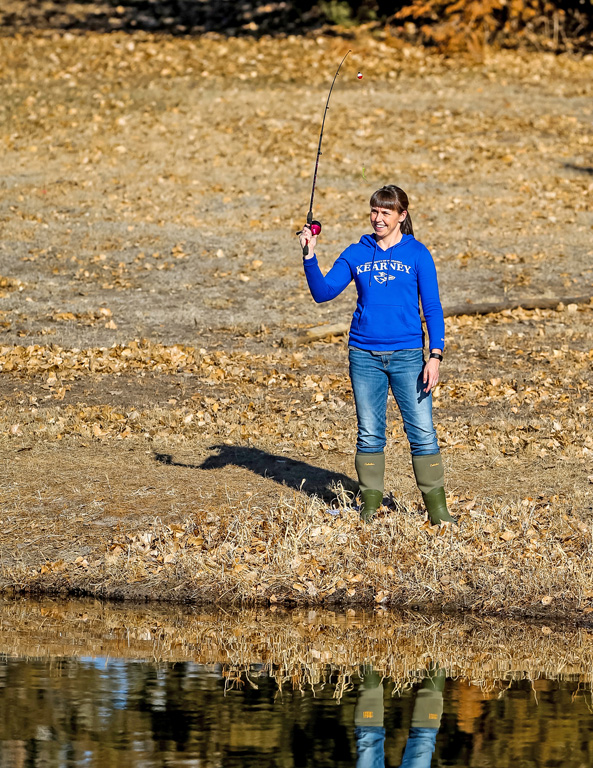 When a reservoir is created, the flooded trees and vegetation provide plenty of habitat for aquatic life. However, this habitat breaks down over time, leaving less cover around the lake margins.

“There’s been a huge focus on habitat in reservoirs for some time,” said Wuellner, noting the increased interest in man-made structures, which last much longer than Christmas tree piles or sunken timber.

The UNK researchers – including graduate students Logan Dietrich of Alliance and William Schriener of Wright City, Missouri – are concentrating on the Georgia cube, a design originally developed by the Georgia Department of Natural Resources that has since been utilized in several other states. The 3-foot structure is constructed with PVC pipe and about 50 feet of corrugated drain pipe that’s wrapped around and through the frame. It’s anchored to the lakebed using either gravel or cinder blocks, providing a spot for fish to feed and find cover.

To answer those questions, Georgia cubes were installed last fall at Cheyenne State Recreation Area and Wood River West State Wildlife Management Area. This summer, Dietrich will begin analyzing the structures to see how they stack up against natural habitat.

He’s using a different configuration of the Georgia cube to measure the benefits for young bluegill at Fort Kearny, Sandy Channel and Windmill state recreation areas.

“That will help inform the state when they’re doing any future reservoir habitat projects. You might put in different structures depending on what species you’re hoping to benefit,” said Wuellner. She believes this research can influence habitat management decisions throughout the U.S.

“Hopefully our work extends beyond Nebraska,” she said.

Wuellner also has students studying cove characteristics at Harlan County Reservoir, as well as muskie movement and habitat use and the survival of stocked Chinook salmon in South Dakota. 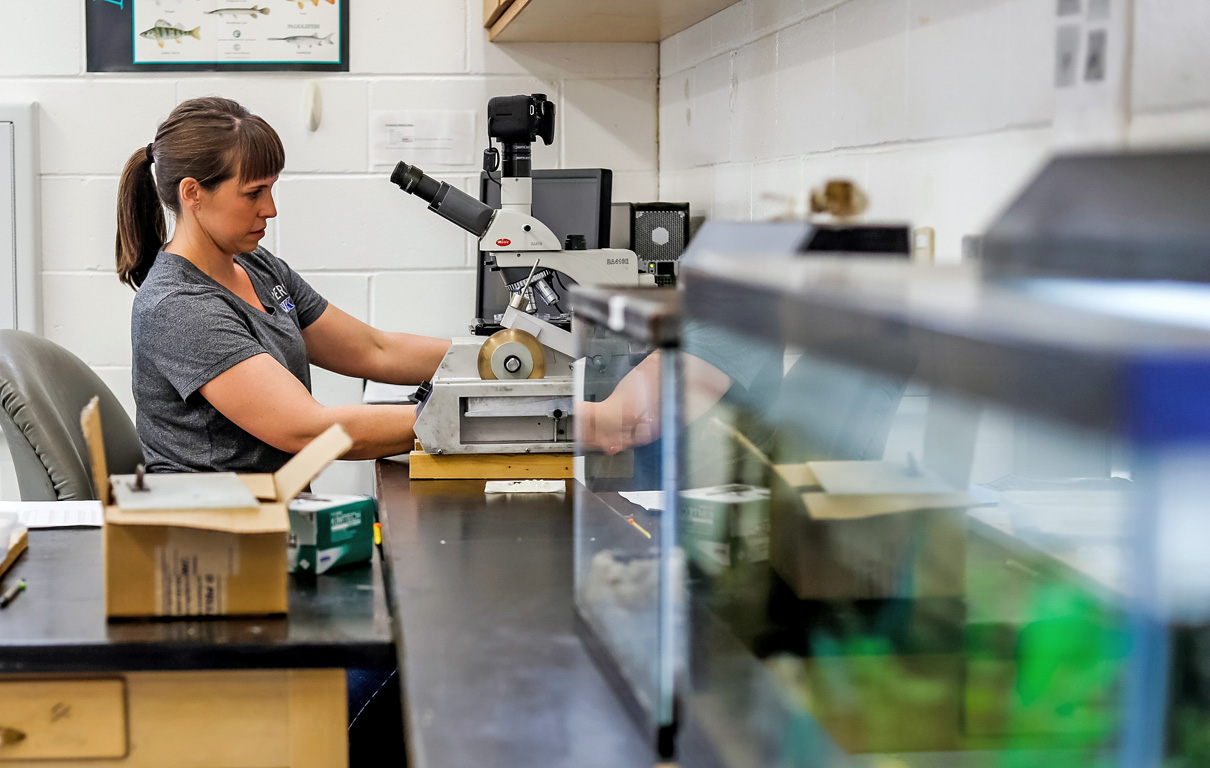 As a researcher, educator and mentor, Wuellner encourages her students to take the lead on projects.

She wants them to pursue their own passions while preparing for future careers in the field.

“That’s how it should be, because once they graduate, they’re going to be the leaders. And hopefully they’ll have long careers where they’ll make an impact,” said Wuellner, who enjoys watching her students’ growth and development as a research project progresses.

“They can see that their work matters, and that’s what I really like,” she said.

In addition to fisheries management, Wuellner’s research focuses on natural resource conservation and land-use practices. She’s a fellow in the Center for Great Plains Studies and a member of the International Association for Society and Natural Resources, Great Plains Natural Science Society and American Fisheries Society, which has recognized her with numerous awards and honors.

Above all else, she’s a mother who cherishes those moments at the lake with her family.

“It’s a lot of fun thinking about how we all work together to create this experience for people. And it’s an experience people are looking at more and more right now,” Wuellner said. “We need a reason to get out and enjoy the outdoors and reengage with nature, because we’re all tired of Zoom at this point.” 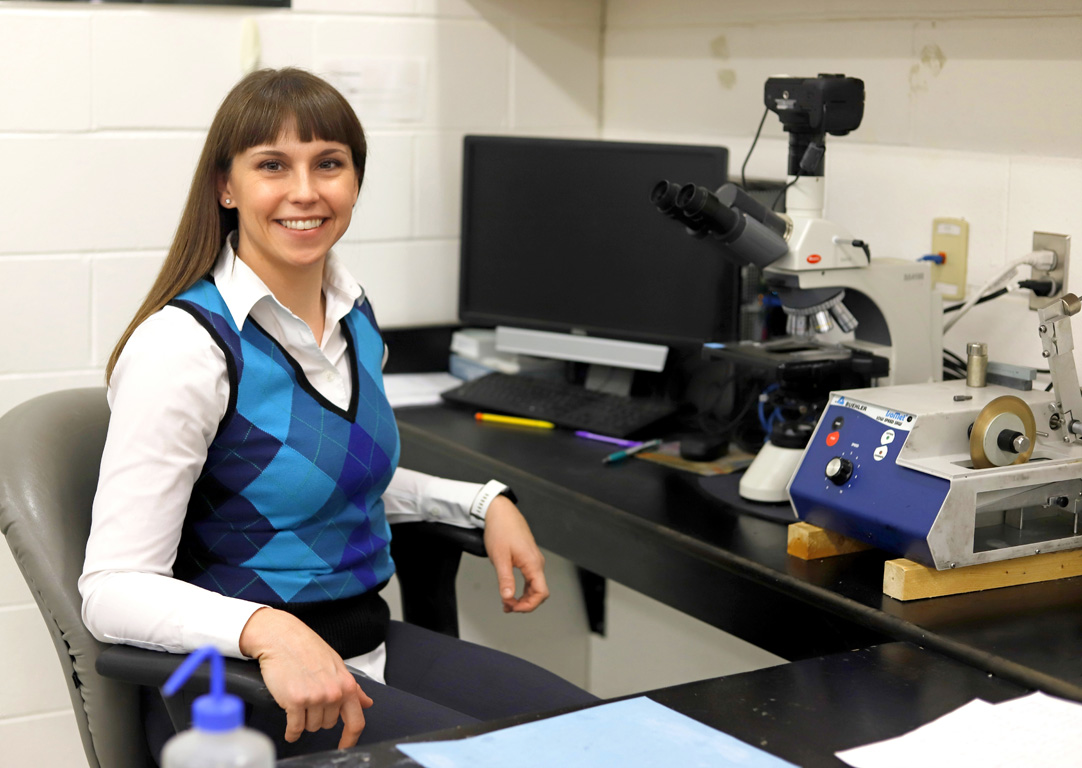