When she moved to Kearney, Nebraska, seven years ago, Jessica Hollander faced her anxieties about her new community, new life and new realities by observing and writing.

She had just won the prestigious Katherine Anne Porter Prize for excellence in short story writing for her collection “In These Times Home Is A Tired Place.” Now a second collection of short stories, “Mythical Places,” builds on the foundations laid by earlier work, and Hollander is a rising star in the short story writers’ galaxy. 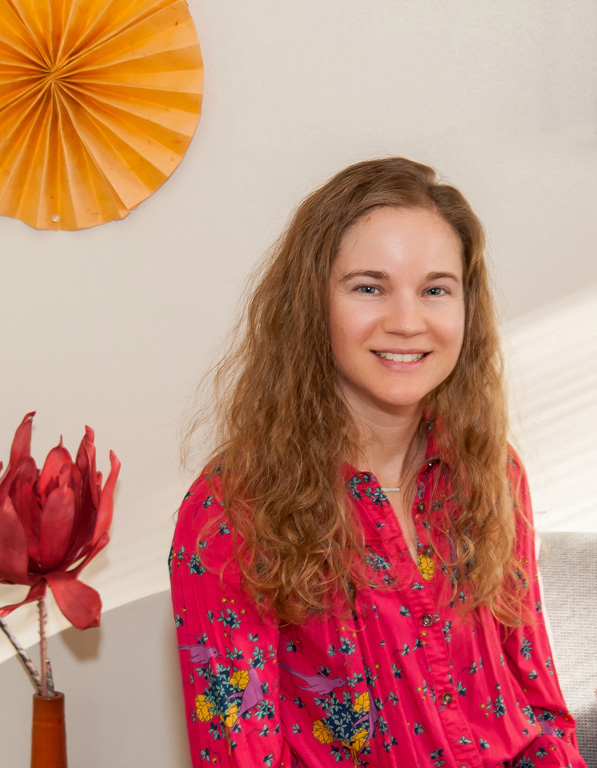 Now an associate professor of English at the University of Nebraska at Kearney, she teaches creative writing and pursues her own work as a writer. In 2020, The Sonder Press published her collection “Mythical Places,” a 46-page chapbook collection of six stories and essays. They are an exquisite, hyper-real look at life. And while most of the pieces are fiction, they do draw from what she’s observed and felt during her time in Kearney, and they explore the feelings of building an identity in a new setting.

Hollander is an “outsider” in Kearney; it’s a feeling she’s had since leaving her hometown of Ann Arbor, Michigan, after earning her undergraduate degree from the University of Michigan in 2004. She moved to another college town, Chapel Hill, North Carolina, where she worked in a bank, and then to a third college town, Tuscaloosa, Alabama, where she earned her Master of Fine Arts in creative writing from the University of Alabama, teaching in its English department.

Each community provided the observant Hollander with details, moods and themes that enrich the settings for her stories.

“Living in Alabama got me interested in drawing inspiration from the landscape, which was so different from Michigan,” she said. “Masses of kudzu vines grew over everything, summers were so hot you couldn’t leave the house until dusk, and there were these giant ant mounds everywhere. And if you wandered into one, the ants swarmed up your legs in seconds.

“And the humidity. We didn’t realize it, but the crawl space under our house was expanding from the humidity, and then one day there was a large crack and two of the floorboards in our bedroom had raised up like a ramp.”

While in Tuscaloosa, a tornado ripped through the city. It did not affect her family, but it affected friends. And the historical, racial and socioeconomic tensions of Alabama were foreign to her Midwest upbringing. The house, the weather, the history, even the tornado, led her to explore the genre of Southern Gothic, and she wrote many stories while living there that drew from the contrasts of that landscape, its oppressions and luscious abundance.

“A writer has to pay attention to place,” she said. “Setting is often overlooked by beginning writers. They view it as filler or background. But setting is tonal. It’s a perception and worldview. It’s landscape. It creates, as John Gardner famously says all stories should do, a vivid-continuous dream so that the reader forgets a world exists outside the story.”

Kearney was a welcome change to the humidity and tensions of Alabama. “I am still an outsider. It’s not the place I grew up. But I always want to write about where I am living.”

And now that she’s in Kearney, the idea of Nebraska has taken hold. 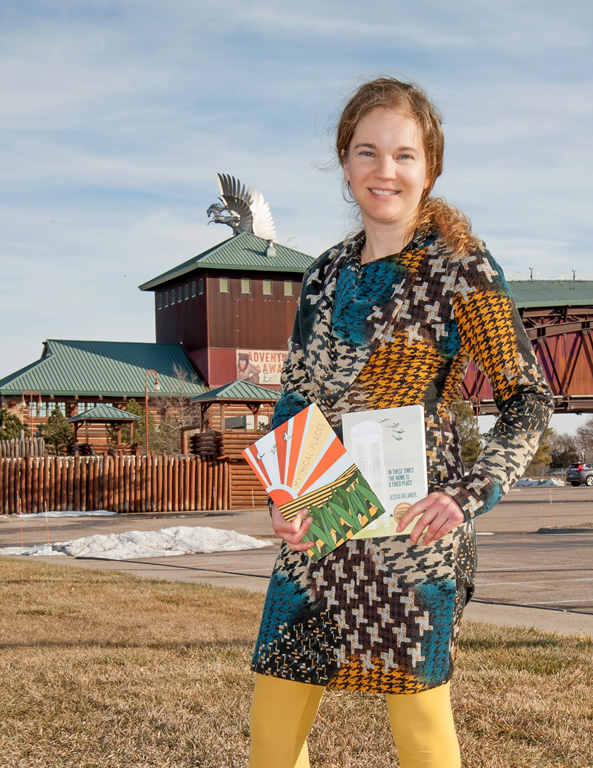 Though Hollander now sets her stories in Nebraska, she has continued to take risks and experiment with her stories. The opening piece of “Mythical Places,” titled “Nebraska,” is an example. The main subject is unnamed, but identified as “The Young Mother,” who with her spouse and toddler son has moved to Kearney for her husband’s job. She struggles to find her identity, takes up running and eventually seems to find her bearings. The Kearney Archway plays a role – its winged silver steel horses seem to be attempting to flee, as is perhaps the young mother.

“Mythical Places” links themes and locations. Another story, also set in Kearney, explores the idea of others who lived in a home before us. One story examines the anxieties, dreams, hopes and dreams of pregnancy; another the dreams of her brother and his girlfriend who are heading to their idea of nirvana, Seattle. They have no jobs lined up but know they will find happiness in the land of coffee shops and grunge music. A final story muses on Disney World and its role as a place of fun, culture and world travel – the “ideal” location that’s met with scorn but still so beloved.

The stories examine roles women take on, such as pregnancy or motherhood, and the characters’ reactions as they bump up to the culture’s idealized or romanticized versions of those roles, even as those roles don’t play out exactly as envisioned.

For example, in “Third Pregnancy” the woman runs well into her ninth month. Her swollen body and legs hurt, but yet she runs. Is it to prove some point that she’s got stamina, that she’s a martyr, that women are warriors, that the tut-tutting of neighbors doesn’t bother her? “Part of the pleasure,” she writes, “is looking forward to the ending.” The ending seems to encompass many things: the pregnancy, the run, this phase of her life.

Short stories are special, Hollander said, because they are like small pieces of art that can be perceived all at once. “Mythical Places” can be read entirely in one sitting. But each story can be savored, like a small, perfectly ripe summer peach enjoyed all by itself or mixed into a larger, artful pie. The stories showcase Hollander’s deft and spare use of words to precisely describe a mood or place. Reviewers of both her collections comment on her abilities to evoke emotion in so few words.

“Here is the middle of the country, where all things crossing must pass. Now driving beneath an archway anchored with winged horses signals home. The young mother has read about this Great Platte Archway: three hundred feet straddling the interstate, its red orange yellow resembling a Nebraska sunset. Inside, Westward Expansion is presented in an extravagant multimedia display, already once bankrupt and revived. She is not prepared for the silver horses, one at each end of the arch, posed midleap. The metal wings are three times the horses’ size and not attached to their backs but buttressed above and away from them, an artist’s vision of dimensionality. The feathers spread and flutter out like blades. Maybe they aren’t wings but something pursuing the horses, clawing at their backs. The horses are escaping. They leap from either end of the Archway, fleeing history.” – Excerpt from “Mythical Places” titled “Nebraska”

A professional writer for 20 years, Hollander has settled into some routines now that her teaching and family life have less chaos. She does most of her writing during the summer, when she has larger blocks of time to think and reflect about that work rather than devoting creative energy to her students. 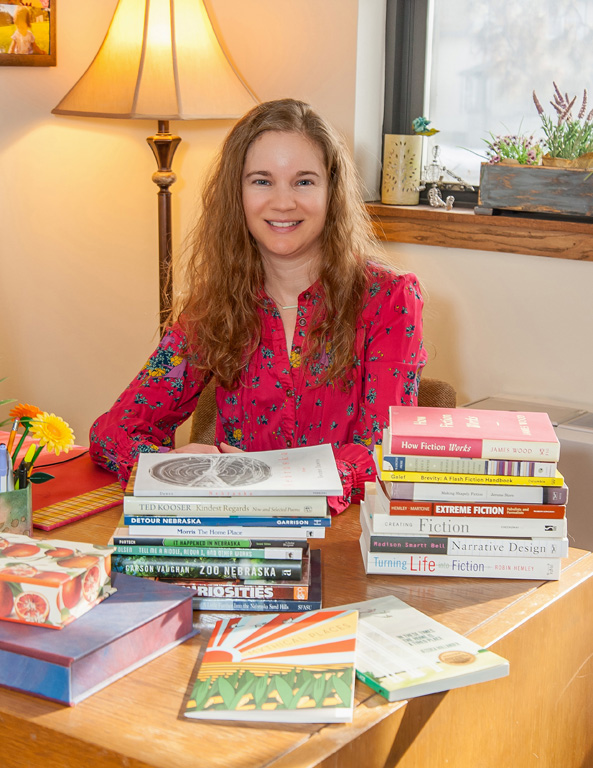 “I find myself needing periods of gathering. Like a squirrel, I gather. I see what’s happening around me, I live my life, I read, I pay attention to things and think about things I’m interested in. And then when it’s time, I have these ‘stories’ I’ve accumulated,” she said. “Sometimes there’s something that I’ve observed or experienced or read that I know ahead of time I want to write about. But often this is not how it works.

“I usually sit down with a small image, dialogue exchange or a character’s voice in mind, and as I write, some of the observations, ideas and lived experiences that I’ve gathered over months of not writing come out in my writing in unexpected and useful ways. I like to think that my subconscious has been working the whole time I wasn’t writing, piling things in corners, making connections for me.”

She says she has learned to “trust the subconscious” and “surrender control” as her mental filing cabinet of gathered ideas coalesces into a piece. “Usually, my stories start from small places, a launch point or trigger, some phrase or image or voice that my mind has been circling for a while without me consciously realizing it.”

Hollander enjoys experimenting in her fiction, such as creating a piece with an unnamed character, incorporating fairytales or other mythologies, or organizing fragments of prose into a mosaic.

“I like thinking of stories as puzzles I need to solve, and I just start doing weird things and putting weird things together and then see how I can make those things work together in meaningful ways. I say they are ‘weird things,’ but really, they are already connected because they’re coming out of my mind next to each other; I just don’t know right away why my mind is deciding to put these things together yet. I think writing is always a process of self-discovery in this way.”

Hollander’s most recent works are coming from what she called a “neighborhood watch collection.”

“I’ve been working on a lot of what I see as neighborhood stories inspired by Kearney: people I see when I’m out walking, neighbors I’ve interacted with, the fields, the train tracks, the university, the parks, the splash pads, different locations around town,” she said.

“I want to explore my own sense of unease in living here, in this place that feels safe and sheltered from many of the troubling aspects of dense urban living and heightened conflicts in certain regions. But there’s this tension I feel living in Nebraska where I can’t settle down. Sometimes it’s almost like I make up things to worry about. I want to think about the unseen dangers lurking at the edges of our lives, the edges of our landscape, the edges of our community, the edges of our minds.”

Hollander has written a lot during the COVID-19 pandemic. She had hopes that 2020 would be the year she and her family would travel more, explore the wider Nebraska landscape, see what’s happening out here in the corn. But with those avenues shut down, she recently purchased several books by Nebraskan authors Willa Cather, Tillie Olson, Wright Morris and more contemporary authors such as Kwame Dawes, Ted Kooser, Bryan Jones, Carson Vaughan and Ladette Randolph; and other works that explain the geography and history of the state. And the pandemic itself has given her a new perspective on her life in Nebraska.

“I’ve already written a piece set in Kearney about the pandemic and its isolating effects,” she said. “It’s interesting how while I’ve been even more isolated from my extended family and my hometown in Michigan, I’ve also kind of embraced my community in Kearney more than I ever have before, when it was easy to travel and be away from here.”

She says her fondness for this place has grown. That her feelings are more complicated.

“There is so much rich material to mine from my immediate community. I can’t wait to explore the state more, but I feel like I have plenty here in Kearney to keep me busy for a while.” 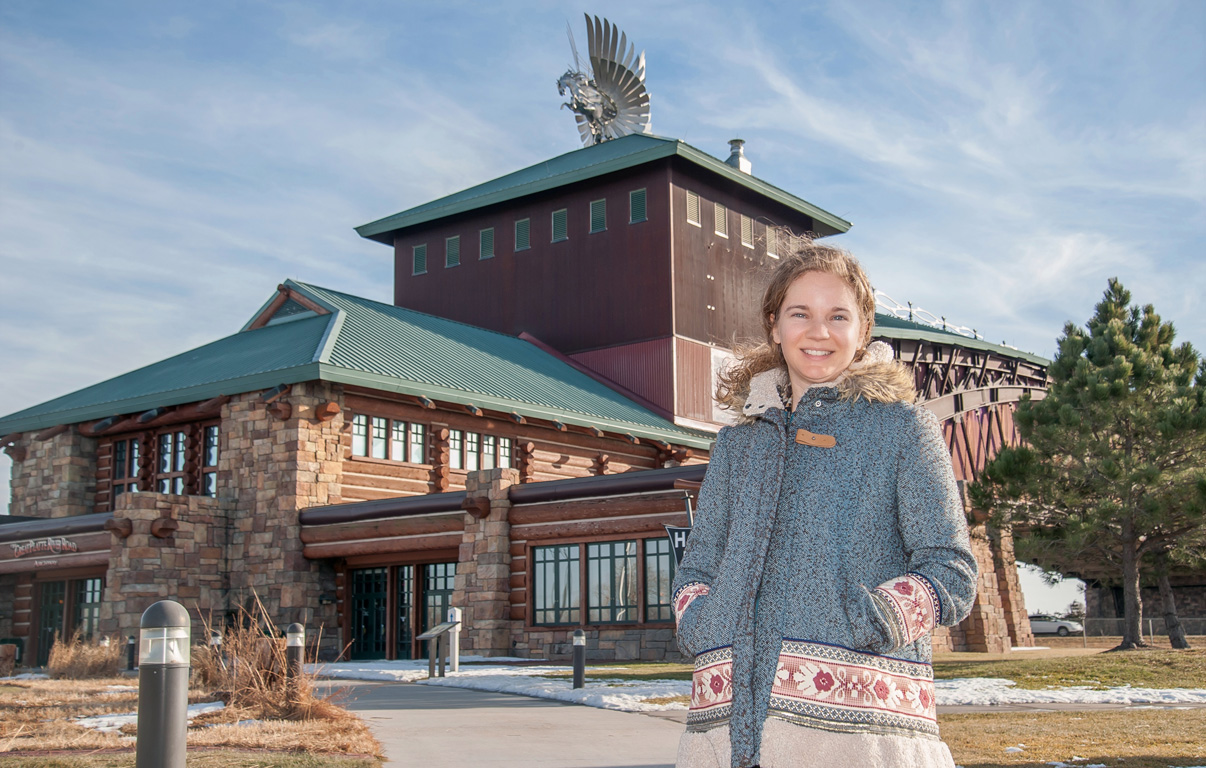