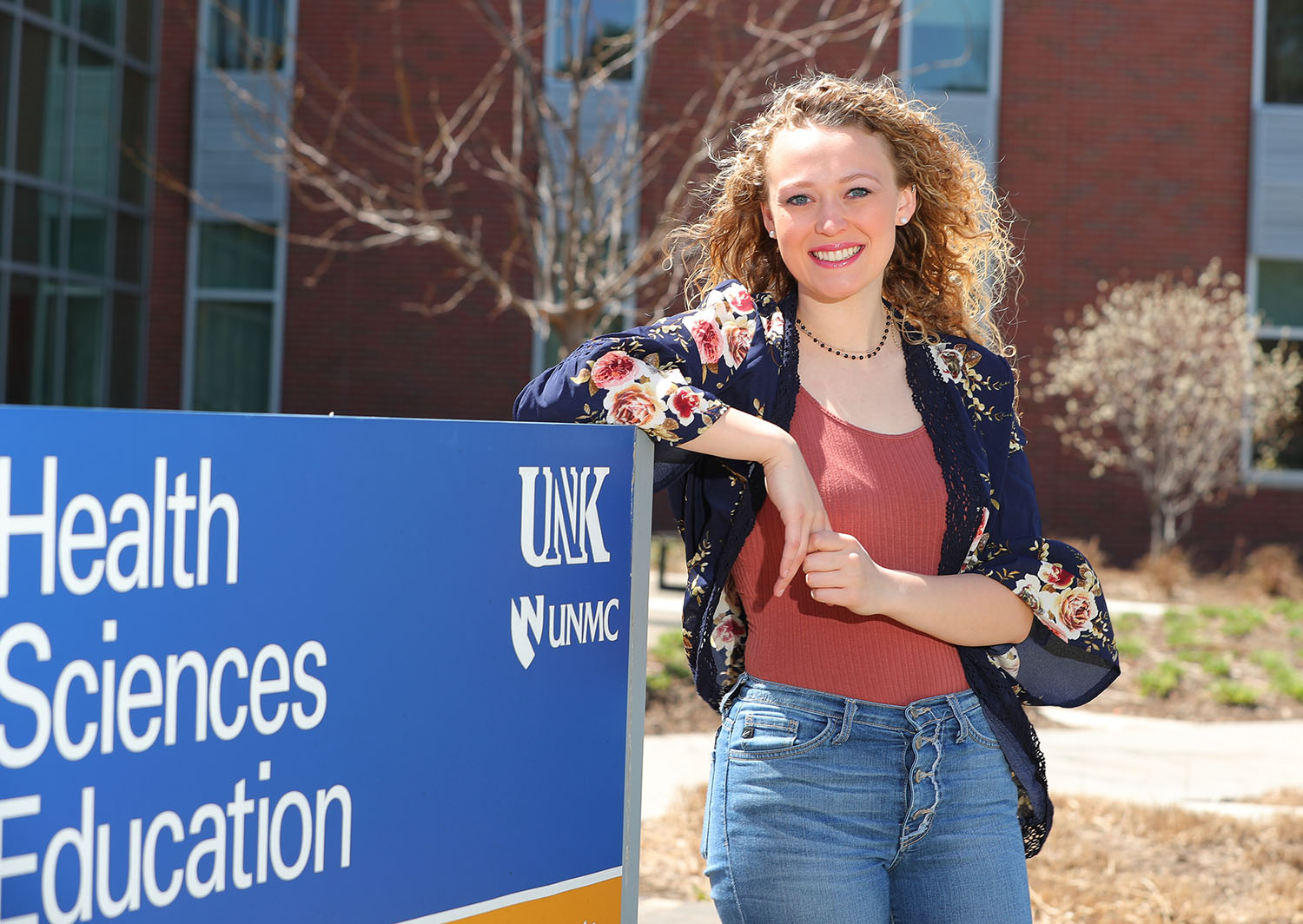 Whether testing patients to see if they have COVID-19 or caring for those who do, nurses are fighting on the front lines to safeguard the lives of those affected. They face multiple challenges, from a critical shortage of nurses, beds and medical supplies to exhaustion and fears of infection.

You might think that would discourage students considering going into nursing. But for Maci Kroupa, a nursing student at the UNMC College of Nursing’s Kearney Division, seeing the heroism demonstrated by health care workers has only strengthened her decision to join the profession.

“I’m so inspired by everyone who is working longer shifts, under mountains of personal protective equipment, and they’re still doing their best to advocate for patients,” she said. “They go to work every day knowing they’re putting their own health at risk, but they still want to be there for their patients.”

Kroupa’s point of view isn’t informed from what she sees in the media or learns in the classroom — she has hands-on experience with patient care. She gained her certified nursing assistant (CNA) license while still in high school, and has worked in the memory care unit of a long-term care facility for the past three years.

“I’ve been in on the ground level,” said Kroupa. She worked hard over the past two years while in UNK’s pre-nursing program, with the goal of landing a spot in UNMC’s nursing program last fall. And although she’s currently focused on her nursing classes and clinicals, she still works as a CNA on the weekends or during breaks. At the seniors facility that employs her, she’s seen COVID-19 patients firsthand. “We’ve had positive cases, but have been able to isolate them to prevent a major outbreak throughout the facility,” she said.

To apply for the UNMC nursing program, you are required to have your CNA license. Kroupa believes that has helped her become a better health care provider. “Many people think you become a CNA to hone your nursing skills and bedside manner. But being with patients in a memory care unit, who are at their most vulnerable state, has made me a better human and a stronger nurse.”

MORE THAN A MAJOR

Kroupa is from Hadar, Nebraska — a village of 293 people. Her mother is a nutrition educator and works for Nebraska Extension in Norfolk, teaching families about health and nutrition. She has other health care providers in her family, as well. Her father was a volunteer EMT, her grandmother is a nurse and she has aunts and cousins who are medical technologists and nurses. She doesn’t see nursing as a choice — rather, she sees it as a calling.

“I wholeheartedly believe I have been called to help people,” said Kroupa. “Nurses are so much more than caregivers who administer medication and take vital signs. They support a patient as they transform from a state of illness into well-being. It is an honor to hold a patient’s hand, or to prepare family members for the worst outcome, or to even cry tears of joy with patients and families.”

Rural nursing — and caring for a rural population — has become a passion of hers. “Nurses can really make an impact in a rural community,” Kroupa said. “Resources are more limited when it comes to health care providers, so nurses take on more roles and responsibilities. You see the gamut of patients because you’re not as specialized.”

Kroupa believes it’s important to adapt with your environment. “Rural health care is different than health care in urban areas,” she said. “It’s important to understand the rural lifestyle and what that means. For example, there’s an increased risk of skin cancer for farmers since they’re in the sun so much. You have to talk to them about screenings and protecting their skin. When the floods hit in northeast Nebraska, there was an increase in depression — you need to be able to talk with patients about how they feel.”

She may go on to get an advanced degree after she graduates with her BSN and gets experience in the workplace. “There are opportunities to expand my nursing knowledge in so many ways — whether that’s getting my master’s degree and teaching future nurses or obtaining my nurse practitioner degree. As of now, I’m waiting to see where my nursing degree takes me.”