KEARNEY – The University of Nebraska at Kearney’s women’s studies program will celebrate its 30th anniversary Thursday (Oct. 31) with an event in the Nebraskan Student Union Ponderosa Room.

“Pearl of a Program: 30 Years of Women’s Studies” is scheduled for 9 a.m. to 3:15 p.m. The event, which is free and open to the public, recognizes the women’s studies program and its alliances on campus and in the community while celebrating the past, present and future.

Keynote speakers are Stancia Jenkins, the University of Nebraska’s associate to the president and assistant vice president for diversity, access and inclusion, and state Sen. Patty Pansing Brooks of Lincoln.

Jenkins, who earned a bachelor’s degree in journalism and advertising from the University of Kansas and a master’s degree in public affairs with a focus on business and government relations from Park University, is a qualified administrator and interpreter of the Intercultural Development Inventory (IDI) designed for intercultural developmental of individuals, group training and organizational change efforts.

Pansing Brooks, who was elected to the Nebraska Legislature in 2014, holds a bachelor’s degree in political science from Colorado College and a law degree from the University of Nebraska College of Law. She’s a co-founder of the law firm Brooks Pansing Brooks and was a key sponsor of LB627, a bill to prohibit discrimination based upon sexual orientation and gender identity in Nebraska.

Former UNK professors Kathryn Benzel and Elizabeth Peck, who founded the women’s studies program, will also speak during Thursday’s event, which includes an alumni roundtable discussion and a presentation on women’s community activism.

The anniversary event is sponsored by a Nebraska Humanities grant, as well as UNK’s College of Arts and Sciences, Division of Student Affairs, Office of Sponsored Programs and Research Development, the departments of English, history, political science and sociology, and the women’s, gender and ethnic studies program.

UNK’s women’s, gender and ethnic studies program began as a women’s studies minor degree program in 1989. Benzel and Peck, both professors in the English department, founded the program to bring scholarship for, by and about women into the university curriculum.

Directed by history professor Linda Van Ingen since 2007, the program became women’s and gender studies that year before merging with ethnic studies in 2016 and adopting its current name. The program offers two minor degrees, including an online option, and a bachelor’s degree in women’s, gender and ethnic studies was approved by the University of Nebraska Board of Regents in 2018. That major will be implemented in the near future.

In 2006, women’s studies directors and students, along with the advisory council, worked with the UNK administration to establish a women’s resource center currently housed in Student Health and Counseling. 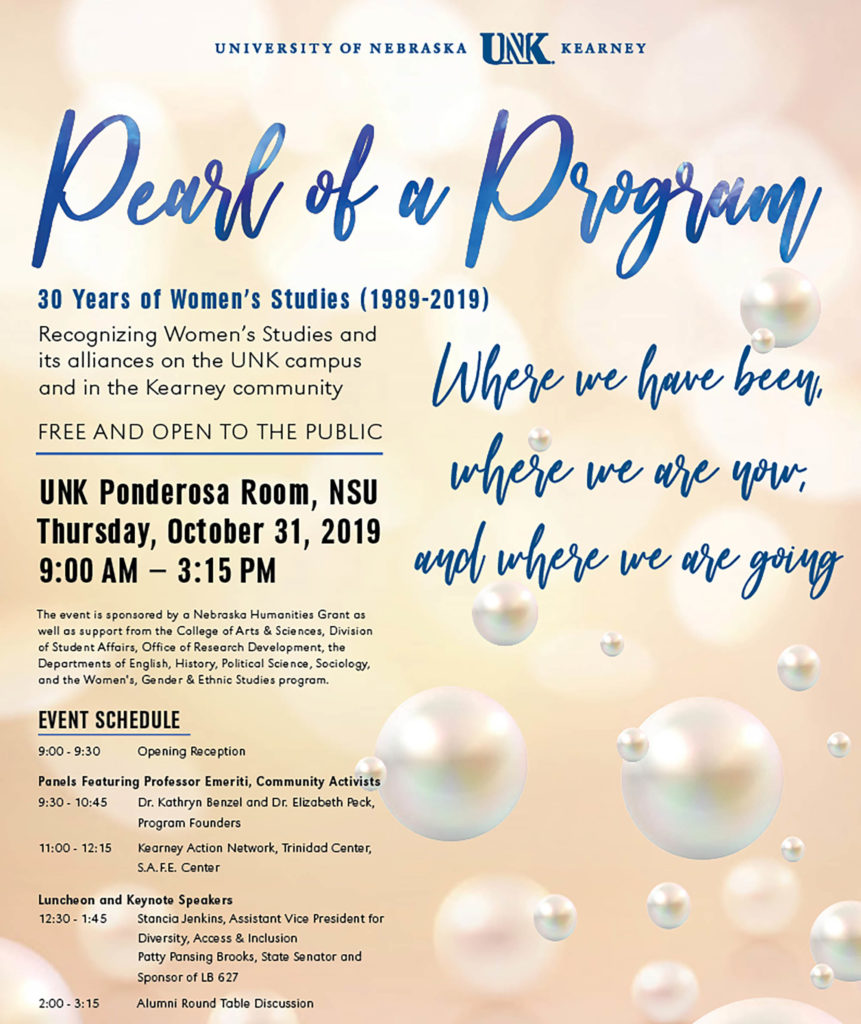